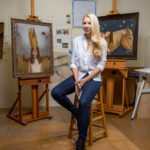 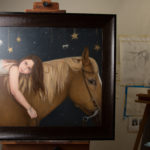 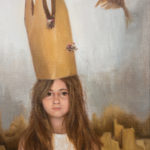 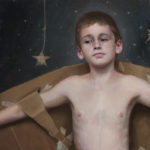 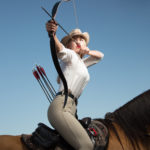 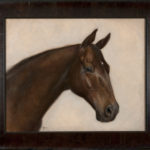 There’s never been a time when art and horses haven’t been defining elements in the life of Alex Bauwens. An accomplished professional artist, the 27-year-old has found her true home in Arizona, a place where she can paint and pursue her passion for horses, mounted archery and competitive reining — and be part of a thriving community of creatives.

Bauwens is constantly on the move, yet nothing she does centers on immediate gratification. It’s antithetical to today’s fast-paced, wait-for-nothing mentality. Each accomplishment has been carefully prepared for, studied, shaped and earned.

“I started riding and drawing when I was 3 or 4,” says Bauwens. “My mom is an artist and she rode horses. Riding was my reward. If I could sit at the barn and draw while she was riding, I would get to ride after she was finished.”

In fact, there wasn’t much young Alex wouldn’t do to get the chance to be on a horse. She pulled weeds, mucked stalls, awoke early every day to complete barn chores and, as a young adult, commuted for hours to train horses.
“It teaches work ethic,” says Bauwens. “I never slept in as a child. I was always up early taking care of the horses and did chores. Even getting the horse ready for a ride was left to me. … When you do the work and earn it, you appreciate it more. It also bonds you to the horse when you understand the work that goes into it.”

In her mother’s footsteps, Bauwens began competitive jumping and vaulting, then switched from thoroughbreds to quarter horses and competed across the country in all-around, English, Western pleasure and horsemanship. Her childhood in Northbrook, Illinois always centered around the balance between riding and creating art. She became seriously involved in competitive reining through high school and into adulthood. During that time, she honed her artistic talent and would often sell her pencil drawings — and sometimes homemade horse treats — at her competitions. It was early confirmation that her art had value and prompted her to pursue art as a career.

When she was accepted at the American Academy of Art, her intention was to begin as an illustrator and then move into fine art, but after a summer internship as an illustrator, she found the technology that now dominates the industry wasn’t where her heart was. A four-week course with Vitruvian Fine Art Studio, under the tutelage of David Jamieson and Melinda Whitmore, changed everything.

“I learned more in four weeks than I had in an entire year of art school,” says Bauwens. “It was a lightbulb moment that something needed to change. What if I could design my own curriculum with them? What would that look like? It might put me ahead in terms of breaking into the fine art world.”

She worked with Jamieson and Whitmore to design her own intensive study program. Over the course of the next three years, she spent more than 60 hours per week painstakingly perfecting her technique. Her first six months centered solely on painting balls, cubes and cylinders in black and white grisaille.

“We didn’t move on until we had perfected each form,” says Bauwens. “It’s basic, but they were perfectionists. Then we painted grisaille still lives and figures and then we added in color.”

Soon, another opportunity arose to apprentice with renowned painter Scott Tallman Powers, who had also made the leap from illustrator to fine artist. It began another three years of learning, with a different approach and a lot of plein air painting. Powers remains one of her mentors and closest friends. Today, she uses the techniques of both experiences to produce her own style.

Bauwens works in pencil, charcoal and oil paintings, creating both commissioned and original pieces of art. She often paints children and explores the concepts of innocence and darkness, city and country, drawing inspiration from memories, film, literature, nature and time. Horses, of course, make frequent appearances in her work, as does cardboard, a material that appeals to children’s creativity but ultimately isn’t sturdy enough to withstand much pressure.

“When I was a child, I created a lot of my own worlds with animals and me,” says Bauwens. “As a kid, you feel invincible, so in charge of your own destiny, but then you grow up. I’m inspired by the juxtaposition of how you thought life would be and how it really is now. What is the same? And what is different?”

The walls of her studio are a collage of color studies, sketches, abstract paintings and 3-D figures that she paints from life. It’s an ongoing color journal where she records ideas and formulas for mixing certain color values of oil paints — including reminders of what doesn’t work.

“I start with a feeling at the beginning of each paining,” says Bauwens, “and I mostly go based on the feeling. As the painting develops, so does the story. What I want is for my paintings to leave something up to the eye of the beholder. I don’t want to reveal all. I want people to draw their own conclusions.”

Looking back to her years in Chicago, when she used to commute hours out of the city for precious time at the barn, horses have always been a necessary break from painting, allowing her to step away and return with new eyes.

“It’s a separate part of your brain to ride horses,” says Bauwens. “Now when I’m in the studio, I’m more focused, and it’s a better use of my time. When I’m only doing art, I think about it 24/7. When I am focusing on the archery or training horses, it gives me a break from the tunnel vision of painting. When your obsessive mind can’t get a break, it isn’t helpful.”

Horses are truly what brought her to Arizona — and mounted archery — in the first place. In 2009, her trainers, Dan and Wendy Huss of Huss Performance Horses, moved their operation to Rio Verde. Bauwens visited four to six times per year to train and fell in love with the sport of mounted archery, as well as the area.

“Horseback archery is an adrenaline rush,” says Bauwens. “It’s so cathartic. If I’m frustrated, I can go do that and it’s a release. In Japan, it’s called ‘yabusame.’ It’s a spiritual activity. You’re taking a prayer from the sky and releasing it through your heart line. It’s a meditative act. It’s like painting. You get into a zone and must be absolutely present with both.”
Treasuring her visits to Arizona each year, she knew her future would eventually bring her to the desert permanently.

“Since the first time I came to Arizona, I loved it,” says Bauwens. “I knew right away that I would live here someday. I was 20 years old. It was strange because I’d come here to visit and then on the flight home, I’d start to feel homesick. I was in Chicago feeling homesick for a place I’d never lived.”

Her chance came in 2014 and she permanently moved her studio to Cave Creek’s Spanish Village. It was an easy transition after spending so much time here over the years. It’s close to the barn and she enjoys the community of fellow artists, show trainers, archery trainers and friends. She spends at least three days each week training at Hamilton Ranch in Rio Verde.

“I’m not really a city person,” says Bauwens. “With art, I can live anywhere. There was no quiet in Chicago. Coming out to Cave Creek, it’s so quiet. I love the location and being able to look out at the mountains. I’ve met so many great, friendly people.”

One of those people is Eric Watson of Watson’s Hat Shop, who first made a cowboy hat for Bauwens and most recently designed a custom hat to accommodate her anchor point for archery. It’s been an example for Bauwens that she is in the right place with the right people: a community of artisans who are eager to collaborate and support one another.

“There are so many diverse art forms here,” says Bauwens. “With creative people, it doesn’t matter what you’re doing. You’re expressing a story or connecting with something. Living a creative life means expressing yourself.”