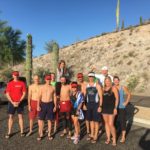 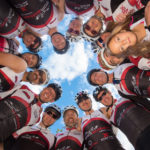 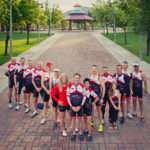 Saturdays and Sundays are the unofficial “sleep in” days across America. Yet around Anthem, long before dawn on most weekends, alarm clocks are going off and a group of men and women, exhausted from another week’s work, are snapping out of deep sleep and climbing out of bed.

As the first light of day is rising over the desert hills, two dozen adults ranging in age from late 30s to early 60s are already burning calories like barbecues burn coal. They might be running down the road, they might be cycling steep hills, they might even be swimming in a choppy lake — whatever it takes to train for races that test their breaking points.

For many people, training for marathons, triathlons and Ironman competitions is a solitary, even lonely pursuit. Here in the North Valley, extreme athletes have gravitated toward one another, creating a super-fit pod.

This is Team Anthem, and this is the place, if you’re looking for a group not just to help you get into shape, but get into super-shape.

Though it sounds grueling, Jerry Murphy, president of the decade-old Team Anthem, insists, “Our central mission is to have fun. If it’s not fun, what’s the point?”

Then again, your idea of “fun” must be pushing your body to get a kick out of this team. A typical weekend has a Friday swim in Lake Pleasant, followed by a Saturday 60-mile bike ride and a Sunday run, with training usually starting around 6 a.m. Murphy notes that team members swim, bike or run as far as they want, depending on what they are training for.

The annual cost is $65, which includes a T-shirt and fitness-related discounts.

“We’re always looking for new members,” stresses Murphy. And you don’t have to be a marathon veteran or Ironman winner to join. “We take people of all levels. We encourage newbies. … We have people of all running abilities. Everyone’s been there. With people starting out, we understand. Our hope is you’ll like it so much, you’ll want to continue.”

Some Team Anthem members shared their stories, all with a common theme: share the pain, share the fun.

Lori Norton has done a half Ironman and is training for an ultra race as well as a full Ironman.
“The team is great for support, motivation, social — we actually do have fun,” she says. “We are all competitive or we wouldn’t be doing this, and it’s fun to have friends to compete with at races. It makes a big difference on race day to know that there are other team members out on the course with you. The camaraderie between all of us is super fun.”

Jim Welsh came to Anthem three years ago from Oregon and is a relative newcomer to the swim-bike-run world of triathlons.

“Since joining Team Anthem a year and a half ago,” he says, “I have grown as a triathlete from the knowledge shared by the group and from my own experiences. I have also gotten stronger and leaner. I’ve lost nearly 20 pounds since we moved here and my cholesterol levels are the lowest they have ever been.

“Finally, I’ve made some really good friends. You get to know people really well when you ride with them for two to three hours every week.”

Clint Phillips — proud to be Team Anthem’s oldest member, at 63 — and his wife, Julie, enjoy the shared pain.

“I joined Team Anthem at the request of my wife, who convinced me to start running again after many years of executive life,” Phillips says. “I hadn’t run since 1972!”

He hits the hills with tasty goals in mind: “I run to stay fit and young … and to be able to eat candy bars and drink beer without gaining weight.”

Julie, in turn, heard about Team Anthem from her sister, Lori Norton. Julie has a pretty remarkable workout story: “After struggling with my weight for 30 years, I decided to have lap band bariatric surgery in July 2014. Since then, I have shed 75 pounds through changes to my diet and I exercise six days a week. I run, bike, swim and lift weights.”

A big part of her success, she says, is Team Anthem.

“Everyone is so motivating and inspirational,” she explains. “Going on a long ride by myself can be a grind and boring, but with the team, we make it fun and the time goes by faster. I also look forward to the team swims at Lake Pleasant every Friday. I would never get up and go by myself.”
At 50 years old, spunky Terri Hay just finished her first half Ironman. She has always been a biker and runner, but was intimidated by swimming. After joining the group, Hay says Lori Arnold and other Team Anthem members helped her overcome her fear of the water and complete the swim-bike-run Oceanside 70.3 event in Southern California.

“Without the support of the great members and president of our club, I would not have had the courage to even compete in this race,” she says, adding she has signed up for another triathlon. “I guess I caught the bug.”

Jeff Bleich comes up to Team Anthem from the Sonoran Foothills, south of Carefree Highway. He is working to prepare for the Ironman 70.3 in Hawaii on June 4.

“Team Anthem has helped me reach a group of people with the same interests as myself,” he says. “Many team members have given me valuable information about my training and lots of support and encouragement along the way. I have made valuable friendships in a short period of time and believe this team offers tremendous support for athletes of all levels of training.”

Darren Evans of Tramonto says Team Anthem has been a super boost to his health.

“Incorporating a balanced training regimen with proper health and nutrition has been the fountain of youth,” he says. “Most of us that are in our 40s are in better shape than we were in our 20s. This sport is addictive; you do one, then get sucked into the vortex that keeps you coming back for more.”

Murphy, the Team Anthem leader, has been doing triathlons for 11 years. In addition to building camaraderie, he says the philanthropic nature of the group is key to him.

“Several of us coordinate our training and race efforts with charitable causes,” he says. “I have done the San Francisco to Los Angeles AIDS/Lifecycle ride twice, which is a seven-day, 545-mile ride, helping raise money for AIDS awareness and prevention; as well as run races for the Leukemia and Lymphoma Society, the American Cancer Society and the American Diabetes Association.” He notes that he and Evans have also done the 207-mile ride from Peoria to Puerto Penasco (Rocky Point), Mexico, raising money to build homes for impoverished families.

While many Team Anthem members are training for upcoming races and events, John Soukup of the Sonoran Foothills puts it simply: “I am training for life.”

Even for all the benefits, how do Team Anthem members answer when someone says, “Really? You get up at oh-dark-thirty on your days off — are you nuts, or what?!”

“Yep, I’m crazy,” laughs Norton, “but it’s actually what keeps me sane. A good workout and healthy lifestyle is what keeps me from going crazy. I love watching the sun come up; no better way to start the day.”

“Yes, it’s dark,” says Clint Phillips, “but if you want to get a good, long workout in — 25 miles on a bike and run six miles afterward, which is called a brick workout — you better get up early.”

Bleich admits climbing out of bed early on the weekends is a big deal for him.

“I am not an early morning person, but when I join the team at 5:30 a.m. it is because I look forward to seeing the team members and creating memories,” he says. “The conversations, photos and training are priceless and it feels great to be done with your hard workout before most people leave for work.”

Believe it or not, adds Murphy, “We have a lot of fun and sometimes have some very deep philosophical discussions while on our long rides and runs at zero dark crazy in the morning.”

There is a method to the madness, Julie Phillips says: “It makes it a lot easier to get up at 4 a.m. knowing that I have committed to be at a certain workout and that the team will be waiting for me.”

“Yes, we get up early,” adds Hay. “Yes, we do crazy events and yes, it is fun and worth it. When you are part of this great group of middle-aged athletes, you will find fun, companionship and support.”