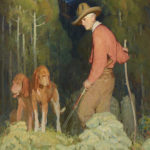 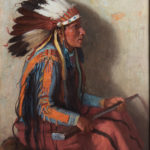 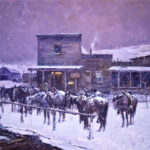 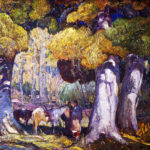 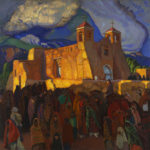 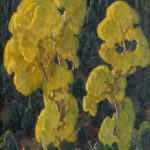 Taos: the city where art meets beer. These days, you can visit a variety of brew pubs and tap houses before or after gallery hopping in this quaint little town (population: 5,176) with a huge art culture and history.

The beer connection was the primary focus for one of the Taos art scene’s founders. Oscar E. Berninghaus was a St. Louis native who tapped — so to speak — into his native city’s famous industry to fund a move from one of America’s Industrial Revolution cities to a place where he would lead a modest cultural revolution.

According to oeberninghaus.net, Berninghaus was lucky to have a major account with Anheuser-Busch, whose steady patronage was “a great help to him economically, allowing him to rent space in two different cities and, eventually, to move out of St. Louis entirely.”

For beer titan Anheuser-Busch, Berninghaus’ paintings turned into billboard illustrations, says Barbara Brandenburg Brenner, Berninghaus’ granddaughter. Her grandfather was also a social friend of Adolphus Busch, who founded what would become one of America’s biggest breweries.

“My mother used to talk about going with her dad to the Busch farm,” she says. “My brother and she would run around and play while my grandfather and Mr. Busch would visit.”

The relationship “was a lucky thing for him,” she adds. “Most artists had to do commercial work. He couldn’t make a living as a studio artist then.” That would change when Berninghaus, working in a quiet town far from the glitzy galleries of New York and Chicago, finally became a sought-after artist.

Indeed, Berninghaus and his Taos troupe took the early 20th century American art world by storm with their vivid, sun-drenched depictions of New Mexico, then little known to the rest of the country. Berninghaus discovered Taos at age 25 when he received his first big commission, a railroad assignment that led him to Colorado and New Mexico. His granddaughter relates that Berninghaus was sketching from a chair secured to the top of a railroad car.

“The conductor pointed out Taos to him,” Brenner says, which led the artist to visit, fascinated with the town’s Native American culture and vistas.

This happened in 1899. The year before, painters Bert Geer Phillips and Ernest Blumenschein broke a wagon wheel just north of Taos while headed for Mexico. While repairing the wheel, they painted Pueblo tribe members and their culture, and ultimately fell in artistic love with the place just as Berninghaus did. Berninghaus, meanwhile, continued to visit Taos before leaving gritty, crowded St. Louis (then the fourth largest American city) to move there for good.

In 1915, after years of talking about starting an art colony in New Mexico, Phillips and Blumenschein became founding members of the Taos Society of Artists. The original members included Berninghaus, Buck Dunton, Eanger Irving Couse and Joseph Henry Sharp. Commerce was a big part of this association; initially, there were no galleries in Taos or anywhere nearby. Thus, the Taos Society of Artists put on traveling exhibits, which quickly became a critical and commercial success. But artists would rather create art than sell it, and the organization of and participation in the road shows soon became tiresome.

“As the secretary of the group,” Brenner says of Berninghaus, “it was his job to put the show together each year. It was a hated job — my grandfather did it more years than anyone else.”

The Taos Society of Artists disbanded in 1927. In just over a decade, the association created financial success for the individual artists and put Taos on the map as a mecca for American art lovers, paving the way for Taos’ now thriving art scene.

Western Spirit: Scottsdale’s Museum of the West is paying tribute to the short-lived but influential Taos Society of Artists. Through April 30, the museum will show 80 works from Berninghaus and his associates.

Brenner will speak about her grandfather’s wonderful life as part of the Taos Society of Artists symposium, a two-day lecture scheduled for April 6-7 from 1 to 5 p.m. at the downtown Scottsdale museum. Scholars will discuss the society’s members, artistic technique and the birth of tourism in Taos, which is about art patronage and its unique artistic association.

Additionally, “Taos Tuesdays” programs will be held at 11 a.m. and noon in the Virginia G. Piper Theater. Topics include Taos associate member John Sloan’s advocacy of Native American art (March 14), and a screening of “Awakening in Taos,” a documentary about Mabel Dodge Luhan and her role in making Taos a haven of inspiration and creativity for writers and artists (April 11).

Brenner’s memories of Taos’ past are scheduled to be shared on April 7 at 2:15 p.m. After hearing her and seeing some of her grandfather’s work, it might be fitting to toast her with a Budweiser, Busch, Michelob or other Anheuser-Busch product. After all, were it not for Adolphus Busch’s patronage, Oscar E. Berninghaus might have been stuck in St. Louis, pining for New Mexico and missing out on the whole Taos movement.

Tags: Scottsdale’s Museum of the WestTaosTaos Society of Artists