From Saguaro to Shaman: Brian Johnson 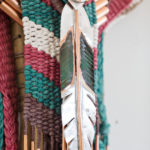 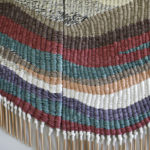 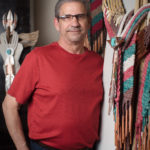 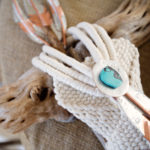 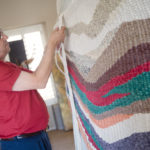 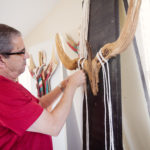 I’m a different kind of artist,” Brian Johnson tells me, laughing. I can’t help but agree.

Brian’s chosen medium is saguaro cactus arm skeletons found in the Arizona desert. He hand-dyes cotton the colors of the desert and uses them to weave the skeletons together, crafting copper feathers to crown the pieces before settling braided collars made from turquoise, sheet copper, cotton or leather around the neck of each “shaman.”

“I explain my shamans as being spirits of Native American warriors in the desert,” Brian tells me. “They speak to me.”

Brian moved to Phoenix from El Paso in the early 90s to get a fresh start. It was during a hike in the desert that he found saguaro skeletons. “When I saw them, I was fascinated,” Brian says. “I envisioned a Native American chief with a breast plate and bones. I took the arms home and knew exactly what to do with them: I wanted to create a vision of a Phoenix bird rising.”

Brian had intended to make a piece for himself, but when he showed the shaman to a few friends, they loved it and connected him to an art gallery owner. The next thing he knew, he was part of an art show for Thunderbird artists.

For the next few years, Brian sold his shamans, taking a break in the late 90s before beginning again in 2012. Now, he’s in several galleries, part of the Sonoran Arts League, and he just attended his first Arizonan Fine Art Expo.

With a full-time job in property management, Brian creates art in his free time. I ask Brian if he’d like to become a full-time artist, and he tells me he wants to wait until retirement, which is still a few years away. He doesn’t want the chore of having to produce art for a living.

“I make [the shamans] because they speak to me. It’s nice I’ve been making money, but I do them more for my own satisfaction,” says Brian.

He finds satisfaction in his audiences’ reactions as well. “People are so kind and say the nicest things about my work,” he says. “They really think the world of what I make.” They marvel at his intricate weaving and are impressed by his unique style.

The most common comments he receives, however, are about how magnificent his pieces are. It’s easy to see why: the wall hangings command an entire room.

“When you first see them, you feel like you have to bow,” Brian says, laughing. “I never thought of them as religious, but they are spiritual. They’re great spirits of Native American warriors. I have this respect for them. They’re just so special.”

Each piece is different because every cactus has its own story to tell. It takes a saguaro 100 to 200 years to sprout an arm. “God,” says Brian. “What those things have been through and seen. It’s fascinating.”

Unlike some artists who struggle with inspiration, Brian tells me his art comes naturally to him. “I envision how I want them completed and know what I want to see when I’m done,” he explains. Most of his pieces are 2 feet by 3 feet, though the larger ones are sometimes as big as 5 feet by 8 feet. Each takes about a week to complete.

Another thing to note: Brian is completely self-taught. He developed his weaving technique by making dream catchers in high school. People often question how he weaves, telling him it’s too perfect or it looks like it was done on a machine.

“It’s all free hanging and hand-woven, no looms or anything. Most of the time you need a loom to have control of the ropes, but I already know what to do. It just comes to me.”

Brian tells me his mother has Blackfoot blood in her. He believes that’s one of the reasons his art comes so easily and his shamans speak to him so clearly.

“When I did my first few pieces, I went to an astrologist. The first thing he said was that I was a textile designer in my previous life,” Brian says, laughing. Previous life or not, Brian and I both agree his pieces are unique.

Brian can be found at Cellar 433 in Jerome and Hogan Trading in Moab, Utah, and he will be at Hidden in the Hills in November. He also does custom work for clients who have something specific in mind. He can go into any interior, look at the colors, shapes, and sizes, and put it all together in a weaving.

“I feel like I can’t make enough of [the shamans], but I don’t feel like I’m mass-producing the same thing,” Brian says.

In the beginning, however, he worried the pieces were too similar. He was concerned he was making duplicates. “But then I started looking at different pictures of Native American chiefs, and although they’re very similar, they’re totally different.”

It’s just like the cacti, he tells me. Each one has a remarkable story. Each is steeped in history and commands respect. And, like the desert they originated from, they’re equally unique, majestic, and colorful.