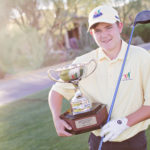 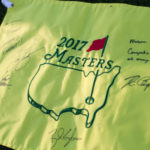 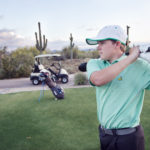 During the spring, most teenagers are probably thinking about the end of the school year and the endless carefree days of summer ahead. But for one Scottsdale teen, the last few months have been filled with moments most golfers would consider bucket list-worthy.

For Mason Quagliata, a sophomore at Notre Dame Preparatory High School, the ultimate spring of his young life began in April at golf’s most hallowed ground — Augusta National. There, Mason won top honors at the Drive, Chip and Putt national championships held during Masters week. Then, in early May, he competed in the U.S. Open local qualifier at his home course, DC Ranch, going head-to-head with professional and amateur golfers 20-plus years his elder, carded a 69, and earned a spot as an alternate for regional qualifying.

All pretty remarkable stuff for a kid who just started playing golf five years ago.

A Master-ful Experience
The Drive, Chip and Putt Championship is touted as a free nationwide junior golf development competition aimed at growing the game by focusing on golf’s three fundamental skills employed in golf. Founded in 2013 by the Masters Tournament, the USGA and PGA of America, it is held the Sunday before the Masters and is broadcast live on the Golf Channel. In just a few years, it has already become one of the great new traditions in golf.

Mason’s journey to the finals at Augusta began nearly a year ago at The Phoenician Golf Club, where he blasted a 315-yard drive to finish in the top three and advance to the regionals.

“I hit it really good,” says the soft-spoken Quagliata, who participated in last year’s Drive, Chip and Putt competition but did not advance to the finals.

This year was a different story, however. After advancing through the local qualifying at The Phoenician and sub-regional at Grayhawk, Mason won the regionals at the famed Riviera Country Club in Los Angeles to become one of 10 finalists in the boys’ 14-15 age group.

“I feel amazing because all the stress of regionals is gone and I have made it to the final spot,” Mason said at the time.

Then it was on to Augusta.

Arriving for his 6:30 a.m. start time, Mason was inspired by the drive down the dark Magnolia Lane at dawn, where so many champions have ventured before. When it was time to tee it up, he put that inspiration to work.

“Playing in front of a big crowd for the first time was incredible,” said Quagliata. “I had to not really think about it too much and play quickly to keep from getting super nervous or thinking about the crowd.”

The trip to Augusta wasn’t all business for Mason, though. He was able to watch the pros play their practice rounds Monday and Tuesday, sat at Amen Corner, met Nick Faldo and dined in the Founders’ Room.

“They treated me like one of the pros,” said Quagliata. Which is something he could get used to.

Competing with the Big Boys
After traveling to Augusta, experiencing the dramatic win at the Drive, Chip and Putt Championship, and appearing on national television, Mason returned home to recharge his batteries. But he didn’t have long because he had another goal in sight: the U.S. Open Championship.

Each year, thousands of golfers tee it up at hundreds of local qualifying sites across the nation on what they hope is the start of their journey to the U.S. Open. One of this year’s qualifying sites was DC Ranch, Mason’s home course where he has played nearly every day for the past two years.

Riding high after his victory at Augusta, Mason was confident in his chances despite the fact that he would be competing against a field of men 20 or more years older than him — and most of whom were professional golfers.

After tying a personal-best 69 at DC Ranch during his qualifying round May 8, Mason found himself just five strokes off the lead and tied with four other players for the final alternate spot. Once again he was in a playoff.

Showing the resolve of a seasoned veteran on an extremely windy day, Mason birdied the first hole, forcing additional playoff holes with one other player. After two more holes, Mason drained a 15-foot birdie put to secure the win. He is now the second alternate and will compete in regional qualifying in Dallas or Newport Beach, Calif. if the other qualifiers drop out.

Mason gives much of the credit for his recent success to all his coaches over the years, including Andrew Getson, Hank Gardner, Dick Hyland, and his current coach and caddy at the U.S. Open qualifying, John Kostis. Kostis is the son of CBS golf analyst Peter Kostis and is an instructor at the Peter Kostis Golf Academy at Grayhawk Golf Club. He has been Mason’s coach for about six months and says he is passionate about working with young golfers.

“Teaching golf, you get to see the light bulb go off and people enjoying it,” John says. “Especially with the junior high- and high school-age kids,” he says. “Being a younger guy myself helps me relate to them a little bit. I think they see me as a peer.”

“He’s younger, more laid back, jokes around,” says Mason. “He gets juniors a lot more than some other coaches.”

And Mason’s mother Shannon definitely sees a difference since Mason hooked up with John.

“Mason really connects with John, which has made a great difference in his game,” says Shannon. “Golf is such a serious, mental game that John teaches while taking some of the seriousness out of it, and is good at keeping it fun while still focusing on the skills of the game.”

“He is also one of the youngest coaches Mason has had, so Mason sees him more as a friend than a coach. They goof around and make jokes during their lessons, while still working on important parts of the technique,” she adds.

A Bright Future Ahead
With all his recent success, it’s hard to believe Mason first picked up a club just five years ago when he was 10 years old. He played golf with his grandfather and participated in golf camps, which he says “made the sport fun.” He started playing competitively in Junior Golf Association of Arizona events at age 13 and continues to do so nearly every weekend.

Other than that, Mason is just a normal 15-year-old kid who likes pizza, playing basketball, hiking and swimming. But unlike other teens — and most average golfers — he consistently drives the ball 270 yards off the tee. He once connected with one that went 415 yards at DC Ranch, although Mason jokes that it was straight downhill with wind at his back.

Mason will be too old to play in next year’s Drive, Chip and Putt Championship, but he has much loftier goals, such as competing in the Junior World Championships in California in July. He also has his eye on playing for a Division 1 college in a few years.

“I still have a lot of work to do with my game before getting in front of the schools I want to play for some day. After that, we’ll see about the pros,” Mason says.

Who knows? Someday he may even add his name to the growing list of so many professional golfers who call Scottsdale home.

Mayfair. Rahm. Casey. Quagliata. Kind of has a nice ring to it, doesn’t it?

Favorite sport (other than golf)?
Football

Favorite golfer?
Rickie Fowler. “He has the coolest outfits and he’s small like me.”

Best piece of golf advice you’ve ever received?
Don’t overthink it when you are playing.

The most difficult thing about golf?
Mentally staying in the game.

What would you serve at your Champions Dinner at Augusta National?
Italian, spaghetti and meatballs and a pizza cookie for dessert

Who would round out your dream foursome?
Rickie Fowler, Jordan Spieth, Smylie Kaufman