Queen of the Reins 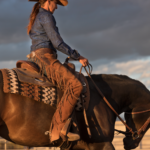 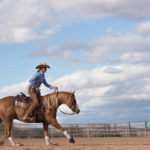 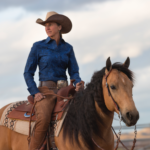 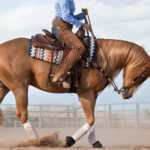 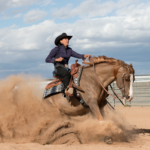 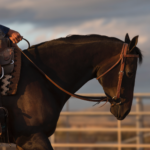 In a sport dominated by male coaches, Ashley Wilson-Hammer is breaking through the gender divide of reining with poise and confidence. While her boots may be smaller and she may be lighter in the saddle, there is nothing soft about her drive to be the best.

With her dark brown hair tamed in a low ponytail and her well-worn hat shading sun-drenched skin, Wilson-Hammer walks with conviction down the aisle of a barn at Chaparosa, her training grounds near Rio Verde. In square-toed boots and weathered jeans, she’s the kind of comfortable that comes from a lifetime of success.

It’s an ease that’s well-earned. Her tough-as-nails approach has garnered her, and the students and horses she trains, a sizeable cache of awards through the years.

Reining is a unique sport. Like its English sister, dressage, it requires riders to fluidly execute set patterns with correctness and precision. Both are incredibly athletic endeavors on both the part of the rider and the horse, and both require a level of teamwork that can only be described as symbiotic.

Beyond that, however, the similarity ends.

From 360-degree spins to sliding stops, reining takes the skills required on the ranch and turns them into an intricate dance of sorts.

The learning process requires unmatched discipline, patience and a little bit of luck—for both the horse and the rider.

“It takes a dedicated commitment and a lot of hours in the saddle to be good at what we do,” Wilson-Hammer explains. “The rider has to become teammates with the horse.

She laughs as she says this—clearly out of experience.

Still, it’s the horses that keep her coming back.

“For me, this isn’t a career, and it isn’t ‘work.’ It’s my lifestyle. I’m out here when they’re sick. I’m out here putting on blankets in the winter. I’m out here giving them vitamins when they need them. It’s not something you get to walk away from after 5 o’clock, but I like it that way.”

Farrier John MacKenzie calls out from behind a horse’s hoof: “It’s because you’re insane!” After another laugh, he adds, “It’s in your blood.”

As a second-generation horsewoman (her father was a trainer, and her mother showed horses), the Kentucky native came by her work ethic and drive for competition honestly. She grew up training and showing horses, never dreaming of a different life.

Her husband, Mike, rode the rodeo circuit for years before the two decided to “meet in the middle,” packing up their respective saddles in Washington State and the Bluegrass State to make their home in the Valley of the Sun. While Mike now runs  a luxury camping excursion company, she has been training horses and their riders in the Phoenix area for nearly 20 years.

We tour the barn and are greeted by curious faces and nickers from a dozen or so of the 29 horses—mostly quarter horses with a few Arabians standing proudly in the mix—in her care.

“These beautiful animals never cease to amaze me in their elegance, athleticism, grace and kindness,” she says. “Each horse I have worked with has a unique personality and a different athletic skill set. Learning how to communicate, coach and train these individuals is not only a challenge; I consider it to be an absolute privilege.”

Wilson-Hammer’s clients include men and women, boys and girls, beginners and experienced riders. Some are owners who choose to watch their horses’ success from the stands, while others are hands-on riders who want to spend all of their free time with their horses.

“No matter where you are or what your goals are, there is something for everyone. That’s something I love most about this sport. There is always a place for you.”

Though there are always challenges, Wilson-Hammer embraces them.

“Watching an owner and their horse come together as a team, seeing their confidence and skill levels increase, observing a new horse owner begin to truly learn how to care for their horse—each of these moments make the blood, sweat and tears aspect of this career more than worth it.

“As a trainer, being allowed to participate in this journey with a client and their horse, is so extremely rewarding, and humbling. In fact, it is mostly humbling, which is what makes those moments of sheer exhilaration. That ‘I am on top of the world!’ emotion is something you strive to make happen again and again for your client, and for yourself,” she says.

It’s also an act of paying it forward. Cowhorse greats Jim Paul, 2006 Reining Futurity Champion, Randy Paul and Cal Cooper are among her most impactful mentors, serving as examples of when to push herself and her horses further, and when to have patience. They also believed in her at a time when many trainers and owners have been hesitant to support women in the industry.

In the end, it is Wilson-Hammer who has earned respect, developing a sound reputation for hard work, dedication and an intrinsic instinct that goes beyond skill or knowledge.

It’s all labor of love.

“I can’t imagine doing anything else,” she says, her brown eyes shining. “By far and away, my happiest days and the memories I will carry with me have all been on a horse, with a horse, or surrounded by my horse people. I thank God each day for this opportunity.”