A Taste of America 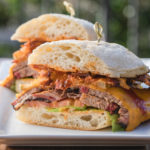 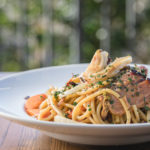 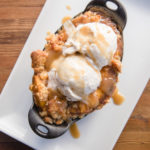 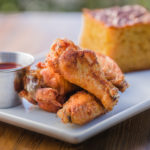 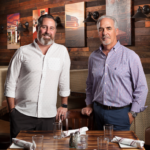 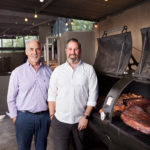 It begins with a slight whiff of something wonderful. Within a few hours, the scent of the summertime barbecues of childhood begins to fill the air, and by mid-day, it becomes an aromatic dinner bell for anyone fortunate enough to find themselves within a radius of a city block or two.

This slow and steady perfection doesn’t only describe the barbecue at Liberty Station American Tavern and Smokehouse; it’s a metaphor for the way Paul Keeler, president of Keeler Hospitality Group, has developed his brand, and his philosophy for casual yet quality neighborhood dining.

Together with his son, Matt, who serves as director of operations, and General Manager Monica Teligades, they’re slowly and thoughtfully creating solid building blocks for what surely will become a legacy.

As the third in a series of endeavors, which includes Market Street Kitchen in DC Ranch and Spencer’s for Steaks and Chops in Omaha, Liberty Station has been the culmination of decades of successful and innovative experience in hospitality and dining for Paul, and a lifetime of learning for his son Matt, whose own experience operating successful restaurants is owed in large part to his greatest mentor: his father.

Dining excellence runs in the family. Paul and his wife, Judy, met 44 years ago in the restaurant business in Boston, and son Ryan is a manager for Michael Mina’s Bourbon Steak in Washington D.C.

With two more Liberty Station locations in the works, theirs is a name that will likely become a Phoenix-area staple.

Tucked away in the westernmost corner of Terravita Marketplace at Carefree Highway and Scottsdale Road, Liberty Station appears at first to be in a sleepy location. Not so, based on the crowds that have already found this desert gem.

This massive, custom-made, 500-gallon smoker sits next to an equally large rack of wood on the restaurant’s west patio. Inside Big Poppy, made by Camelback Smokers, the temperature remains steady and even, allowing cut oak and pecan to make the magic happen.

Mouth-watering Texas brisket with rich bark and a perfect pink smoke ring and Carolina pork shoulder with a mop of Carolina barbecue sauce are among Big Poppy’s daily offerings.

Though they’re fantastic straight from the smoker, acclaimed executive chef, Anthony Apolinar, and Chef de Cuisine Andrew Cornelius use them creatively for favorites like brisket grilled cheese—a grown-up twist on a childhood staple that combines sharp, creamy cheddar with burnt ends, paired with a tavern tomato soup; and smoked pork bucatini—pork shoulder covered in a rich broth accented with lemon and fennel.

St. Louis spare ribs with a Kansas City-style glaze, Jidori chicken (often called the “Kobe beef of chicken”), juicy turkey breast, seasonal local vegetables, beef ribs and succulent flat iron steaks are also smoked under the watchful, patient eyes of chefs Apolinar and Cornelius. On weekends, diners can even dig into smoked prime rib, a flavor unlike any other in the Valley.

Their barbecue is so good that it has already appeared on Food Network’s “Eat, Sleep, BBQ.”

It may be barbecue that lures folks in, but that’s not all Liberty Station has to offer. In a nod to their Boston roots are items such as fish and chips, made with huge filets of amber beer-battered Boston cod and served with real malt and tartar sauce and a side of regular or sweet potato fries; creamy Boston clam “chowdah”; and Boston baked beans with a hint of smokiness from big Poppy.

Pan-seared crab cakes, baked steelhead, Lake Superior walleye, and a shrimp po-boy with homemade remoulade straight out of Cajun country are among the other seafood options that are not so easy to find—much less find done well—in arid Arizona.

And oh, we can’t forget the burgers!

The signature Liberty Burger is a well-executed take on the standard cheeseburger. But the Tavern Burger! Sink your teeth into half a pound of all-natural beef topped with a generous portion of barbecued pulled pork, a thick, melted slice of cheddar, lemonade pickles and their signature Liberty sauce and you’ll never want to settle for anything less.

“Shareable” appetizers, sandwiches, pasta, salads, vegetarian and vegan options, gluten-free choices, and a kids’ menu with generous portions are also on the menu, making it a great stop for anyone with an appetite.

It’s not just the food that’s a hit. Bright and inventive cocktails, like the Raspberry Daisy made with mescal, St. George raspberry, thyme and lemon; Puerto Rican Ti’ created from mint-infused rum, ginger liquor and lime; and Terravitian Fizz made from St. George Botanivore gin, aperol and lemon fizz are just a few of the many great choices.

Spirit-forward traditional cocktails, craft draft beers from Arizona breweries, and a balanced selection of red and white wines are also on the menu.

While the food is the star at Liberty Station, there has been considerable thought put into the décor. In a nod to contemporary design, cooler weather will allow bar windows to open up onto a welcoming patio. Inside, concrete floors have been tinted a warm chestnut color, and the bar top has been artfully torched to create an almost comfortable familiarity. Sinatra-esque photos, created by one of Keeler Hospitality Group’s servers, bring an element of fun personality, as do the upscale rustic walls and community tables.

Beyond the tangible, though, is an element that cannot be built, bought or created. It’s that often-elusive “it” factor that is responsible for making or breaking so many restaurants in the North Valley’s ever-changing culinary landscape.

“I think it’s that family-centric environment behind everything we do that makes a difference,” said Matt. “People feel they’re going to get that personal touch.”

Paul agreed. “I think it’s a feeling of being welcomed. It’s kind of a three-legged stool. The first leg is atmosphere, and I think we’ve created a comfortable and inviting space that has a great energy to it. The second is the quality of our food and beverage. We’re always trying to deliver the freshest, best selections. The third leg is service. That comes from making sure our staff makes everyone feel welcomed and acknowledged. We’re always setting a higher bar for that, and our guests notice.”

Based on the dinnertime crowd making its way through the door, Liberty Station is standing tall on that stool. It’s no surprise, however; in fact, it’s all by design.

Just as the day’s barbecue has spent hour upon hour smoking its way to perfection, so have the Keelers spent time honing their focus and sharpening their approach. Liberty Station is a family endeavor sure to be a delicious win for everyone.