Life Beyond New York: The Art of Ken Kaminski 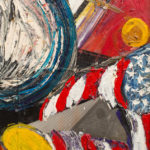 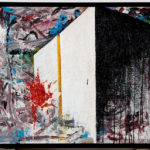 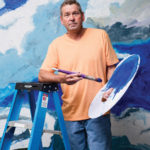 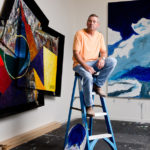 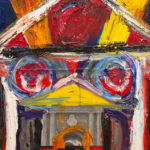 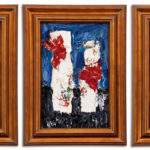 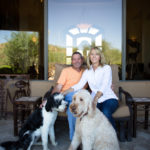 Ken and Nancy Kaminski with their dogs, Larry and Wrigley.

In the midst of a boardroom meeting at his corporate global branding job, artist Ken Kaminski received an urgent call from his wife, Nancy.

“Ken, we’re under attack,” she said. It was September 11, 2001, and he was just 15 miles from where the twin towers crumbled into dust, shaking a city to its core and forever changing our nation. Little did he know that it was a moment that would shape the next 15 years of his fine arts career as he used paint, assemblage, found objects and photography to express his feelings of sorrow, disbelief, recovery and remembrance.

“Within one week, I decided to make that first painting,” says Kaminski. “I think artists have a responsibility to document what’s going on in their world, as crazy as their world may be; and that was my world at the time.”

Kaminski created art from a young age and fondly remembers weekly Sunday trips to the Chicago Art Institute with his father, who has always supported his son’s artistic talent and aspirations. After receiving his Bachelor of Fine Arts from Bradley University, where he first met Nancy, he went on to attend graduate school at Otis-Parsons School of Design in Los Angeles, where he earned a Master of Fine Arts degree. He credits both schools with encouraging him to paint large-scale pieces, eschewing boundaries and pushing beyond the safe confines of convention.

He was heavily influenced by the masters of abstract expressionism: Jackson Pollock, Willem deKooning, Robert Rauschenberg and Franz Kline. Kaminski’s gestural style involves thick layers of paint, often applied with his own hands on mahogany panels or canvas. Finished pieces are bold and physical, with strong, architectural angles, sometimes interspersed with photos, glass, metal or wood. Stories are told with powerful emotion. During the process, which may take days or years, he sometimes decides to completely paint over previous work. His sparer pieces, such as the oil and pencil on paper “9/11,” are equally impactful in their simplicity.

When the couple moved to New York, it was a chance to be part of a major art scene. Now retired from his career in graphic design, Kaminski says he has always maintained a studio, and is thankful that he had both a “corporate gig” and Nancy’s unwavering support to pursue his art, which he’s always considered to be his primary career. “Without her support for the last 30-plus years, none of this is possible,” says Kaminski.

Back in pre-2001 New Jersey, his studio was right behind a window factory, and he created a series incorporating photographs of various buildings, including the home of Ernest Hemingway, set behind salvaged window glass and surrounded by abstract, painted forms inspired by those pictures. His passion for architecture is surely part of why those strong steel towers are the primary focus of Kaminski’s 9/11 works.

“One painting was supposed to be it,” says Kaminski. “People ask me, ‘Why 15 years of this stuff?’ I can’t answer that question. I just had to work through it. I was painting this for 15 years because of that emotion. It wasn’t about money or fame. It still impacts those of us who remember it and I hope that impact will never be lost on future generations. I fully intend to get these pieces in various museums and collections so that they’ll survive long after I’m gone.”Kaminski’s pieces have been displayed in several solo exhibitions around the country, and his powerful triptych “Sequence” is now a part of the White House’s permanent collection. It has been difficult for him to envision actually selling any of his 9/11 works. But with more than 50 pieces stored in New York and Arizona, the time has come to begin parting with them. In particular, he would like to donate “NYC911,” a striking 50-by-45 oil and enamel on canvas with six fire bells, to the National September 11 Memorial and Museum. He hopes the trademarked work will be used to help the museum raise needed funds.

“My biggest fear is being perceived as trying to profit from a tragedy,” says Kaminski. “I donate 10 percent of anything I sell to Wounded Warriors. It’s time for me to make room to paint in a new direction.”

Moving to Cave Creek two years ago was a huge step in that new direction. Kaminski has a distinct memory of completing the final 9/11 painting that now hangs in his home.

IT WAS MY WAY OF DEALING WITH IT BECAUSE I DIDN’T UNDERSTAND IT, BUT I KNEW I NEEDED TO BE DONE WITH IT AND LEAVE NEW YORK.

“I finished it and realized, ‘I’m done. I’m just done,’” says Kaminski. “I painted this subject for 15 years. It was my way of dealing with it because I didn’t understand it, but I knew I needed to be done with it and leave New York.”

He and Nancy, a health industry executive, had previously owned a vacation home at The Boulders, so Cave Creek was a natural choice for its peaceful setting and wide-open spaces. Their home, and the studio that Kaminski built on the property, is flooded with natural light, and large windows afford views of Black Mountain and desert landscape. The studio doubles as his own private gallery, where he can rotate the art as he chooses. Large, roll-up doors open to allow nature inside.

It’s private and quiet, a far cry from the crowded, loud urban sprawl of New York City. After three years of living here, the subject matter of his paintings have moved from angular skyscrapers to rounded hay bales and ethereal clouds. He’s taken more than 5,000 photographs of clouds on his property, and relishes the challenge of painting something that tends toward the formless and celestial. The transition away from the tension of his New York work is tangible in his latest work. Kaminski is creating a series of paintings and photographs based on “The Abstract Nature of Clouds.” His first painting, “Cave Creek Clouds #1,” is a large-scale, expansive abstract cloudscape with bold colors and thick texture.

“I’m going from architectonic to organic,” says Kaminski. “We love it here, and I’m glad to have my studio built and be doing my thing. Our family from the Midwest loves visiting during the winter. It’s a great place to live and to make art.”

Kaminski’s studio is open to the public by appointment, and he has upcoming exhibitions at the Ice House Gallery in Phoenix in October; Fearless Art Works Gallery in Carefree in November; and solo exhibitions at Bradley University in Peoria, Illinois and Walter Wickiser Gallery in New York City in January and March 2018, respectively.