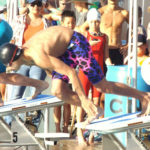 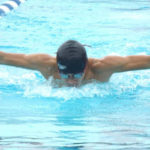 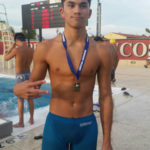 July was an exciting month for Anthem’s 14-year-old JonCarlo (JC) LoVullo. He placed first in the 50-meter freestyle and second in the 100-meter freestyle at the 2017 Arizona Swimming Long Course Age Group State Championship, held at the Brophy Aquatics Complex in Phoenix.

The Anthem Dolphins team member’s 50 freestyle time of 24.79 seconds broke team records, and was merely two-tenths shy of breaking state records. It also qualified him for the USA Swimming Futures, the second-fastest qualifying meet in the country for his age.

“JC will be an important part of the Boulder Creek swim team this fall,” anticipates Scott Newell, head coach for Boulder Creek High School and the Anthem Dolphins. “The next step is the Junior Nationals held in the spring.”

A sophomore at BC, JonCarlo began swimming when he was 5 years old with Aqua-Tots Swim School.
“I still remember the names of the trainers,” he recalls. “Later on we had swim meets there, which was pretty fun.”

He played soccer until he was 10, when he traded in soccer cleats for swim trunks. He began with self-led practices at the Anthem Community Center pool and, after two years, joined the Anthem Dolphins.

“He likes racing, but not practicing,” his coach kids.

JonCarlo swims year-round, four to five days a week. In the summer, he swims each morning for two hours. Now that school is in session, he practices for one hour and 45 minutes each day after school — unless there is a lot of homework.

On the day of the recent state competition, he warmed up, stretched and listened to music.

“I like it when I make it to finals because I get pumped up, and it’s fun,” he shares.

That day, teammates and parents were there to cheer him on, and when he placed first for the second time, they witnessed his hard work paying off.

“It was good to do it again,” he recalls.

Afterward, there was no fanfare or trip to Disneyland.

Perhaps an appropriate celebration, considering his plans for the coming year include taking his swim career to the next level.

“[My aspirations are to] be tougher and work harder,” JonCarlo shares.

He likes swimming with high school friends during the school year; that is, when he’s not playing video games, drums or making edits.

“I like to mix beats … rap music,” he elaborates.

Naturally, JonCarlo’s long-term goals include competitive swimming at the college level. He’d like to teach swimming and get a swimming scholarship. At the top of his list is Arizona State University, where 28-time Olympic medalist Michael Phelps was a volunteer assistant coach last season.

JonCarlo explains, “He practices a lot. He’s dedicated and he works for his medals. He’s really good. I guess I look up to him.”