Hidden in the Hills: Original 8 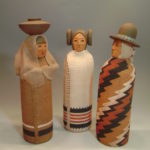 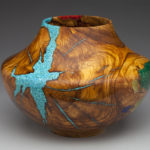 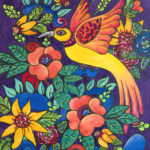 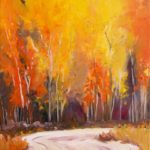 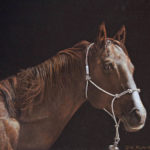 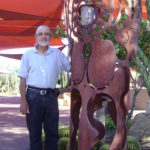 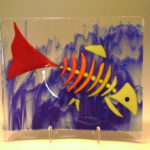 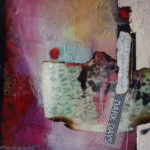 No one can believe it’s been 20 years since the first Hidden in the Hills artist studio tour began, especially eight artists who were there that first year and have participated either as a studio host or a guest artist for the past two decades.

Twenty years ago, none of them had a website, and only Dick Mueller and Morrie Elmer had cellphones. For most artists back then, marketing their original pieces of art before Hidden in the Hills was done through word-of-mouth and occasional postcard mailings that many of them would hand address. In 1997, it took six people less than two hours to address all the names in the League database. Today, it would take 30 artists a half day just to place pre-printed address stickers on all of the maps needed to mail to the current database.

The original idea was for an event that would give the community an opportunity to observe and engage in the creation of art, with an emphasis on process more than purchase.

“In contrast to the proliferation of tent shows for existing art lovers, we were looking for a way to make art approachable for those who did not yet appreciate or embrace it,” says Carole Perry.

While some, including Elmer, joke that the event could easily have been called “Lost in the Hills” in the early days, Hidden in the Hills has become a key element in branding the League and its expanding membership.

With only a few hundred dollars for promotion in 1997, the first tour was a big success, thanks to the tremendous efforts and enthusiasm of the original 44 artists in 19 studios, and the leadership of event co-founders, Judy Darbyshire and Jan Taylor.

“Things were much looser back then, and we didn’t have many challenges when it came to putting up the signs,” Gordy Mischke says. “It was really a hands-on operation.” Mischke hand-painted 4-by-8 sheets of plywood for the highway signs, and several artists volunteered to silkscreen individual studio signs at the high school where Robin Ray was teaching.

With the tiniest budget for collateral material, Darbyshire drew the iconic Studio Tour maps for the first two years, and the photocopied maps were distributed by the artists and posted throughout Cave Creek and Carefree.

Some participating artists had sales the first year, and some did not, but everyone felt it was a huge success in the way of exposure and reception by the community. Mueller recalls, “We had some patrons visit on horseback back then, and now I see close to 1,600 people in my studio each year.” He adds that many of the visitors today are tourists, and one even recognized him in the Minneapolis airport this past summer.

Demand Soars
The second year, the tour expanded from one weekend in November to the two weekends that bookend Thanksgiving, an important timeframe for the League’s signature event that is easily remembered by everyone. Past presidents Ralph Deuschle and Alan Hochman were instrumental in generating the funds necessary to begin producing the highly collectible artist directory in 1999.

With each passing year, the demand to see more fine art soared, and the event grew to include more host studios and guest artists. Some artists even moved into the area with the goal of joining the League and participating in Hidden in the Hills.

Each of the eight artists remember good years and challenging years, especially during the Great Recession. No one year stands out, though Virginia Brooks is pretty sure she is the only host artist who had a patron fall into the pool.

“She was a good sport about it,” Brooks says, laughing. “She was admiring the work of my guest artist, Steve Stento, and was backing up to take a photograph of it when she lost her footing and fell into the deep end. Steve jumped in to help her. While her camera and his cell phone were damaged by the water, neither was hurt, thankfully.”

Watching Artists Evolve
All eight artists credit Hidden in the Hills not only with helping their careers, but also with pushing them to grow as artists.

“Color pencil now constitutes two-thirds of my work, and I also do more landscapes and wildlife,” he says.

Darbyshire had been selling predominately craft fair-appropriate pottery since the 1970s, when she first joined the Cave Creek Craft Council, the Sonoran Arts League’s predecessor. But having an open studio not only inspired larger, more intricate works, it also allowed for her to exhibit other media for the first time.

Her acrylic paintings retain a style formerly developed while working in a commercial art department, and have the aspect of retro illustrations.

“My background as an artist benefits my pottery with thoughtful design, often figurative, quirky or influenced by my long involvement in Southwestern archaeology,” she says.

Now, at 73, her participation in the studio tour has enabled her to gradually withdraw from other shows and galleries, in order to concentrate on a new collection for each year’s Hidden in the Hills tour.

Katalin Ehling is especially nostalgic during this, her last Hidden in the Hills tour. With a career spanning more than four decades, Ehling traveled the world, finding inspiration in Europe, Japan, China, Hungary, Java, Bali and other remote and exotic locations. Closer to home, she was part of many Southwest galleries’ stable of artists in Scottsdale, Denver, Taos and Santa Fe.

“My work has changed and evolved by leaps and bounds,” Ehling says. “The first 15 years, I mainly showed batiks. At that time, I was concentrating solely on batik on cotton with Southwest images of pueblos, Navajo weavers, mothers and children, and New Mexico and Northern Arizona landscapes. Since then, I have added mixed media, collage, batiks on paper and encaustic monotypes. The works have also evolved to abstract, non-representational imagery.”

Ehling says she is grateful that the studio tour pushed her to try new things.

“I delight in seeing that I was never stuck in a mode, but always pushed myself to grow and try new mediums and subject matter,” she says. “Had I not done that, I might have quit a long time ago.” She adds that after Hidden in the Hills, she will continue to create art, experiment with new techniques and enter national and international exhibitions.

Hidden in the Hills is the longest-running consecutive show Elmer has done. And while he still creates wood-turned hollow vessels that are inlayed with precious stones, he says the work he does now is much more extensive.

“It’s a further refinement of what I was doing,” Elmer says. “I use more and different colored stones and local woods that require a lot more inlay. Back then, I wasn’t too excited about heavily distressed wood — now I look for those pieces. My newer pieces also include precious opal, which you won’t see anywhere else. It makes for a very unique piece of wood art.”

For Brooks, who in 1997 was new to Carefree, making the personal connections and building relationships was a key motivation for participating in the artist studio tour.

“I feel very fortunate that we see many of the same people come back year after year to see how our work has evolved,” Brooks says of her and her guest artists. This year, her own work has expanded from landscapes of the American West, Tuscany and Provence to now include peaceful atmospheric paintings.

Glass artist Carole Perry says she is still creating the glass tapestries that she was doing two decades ago, but they have evolved significantly, and today they are in prized glass collections around the globe. Perry has also expanded her work to include more functional pieces, like dinnerware, “big funky wall pieces,” and other contemporary glass art.

Perry, who is a member of Local First Arizona and advocates for buying from locally-owned businesses, says the patrons have been a large part of her creative success.

“My growth has been tremendous in part because about 10 percent of the 2,000 people who come through my studio each year recommend ideas about how I can further experiment with my art,” she says. “It usually takes three to five months to complete all the commissions that result from each year’s tour.”

Those who have followed Gordy Mischke’s work have seen his architectural creations evolve from concrete to steel, copper and stone abstract sculptures; wood carvings; etched glass; gates; fences; doors; and more. And while he credits Hidden in the Hills with landing a large commission with the Radisson at Fort McDowell Casino, he is proudest of his “Desert Madonna” sculpture that stands at the entrance to the Town of Carefree’s amphitheater.

“I constructed that piece to be raffled to kick off the League’s youth art scholarship fund during one of the first tours,” he says. “Through a quirky chain of events, the person who won it moved, and perhaps donated it to the town.”

Youth art is very dear to Robin Ray’s heart and is a big reason Ray was so instrumental in launching Hidden in the Hills’ Youth Art Studio 1 two decades ago. In 1997, Ray was a single mother, teaching visual arts at Cactus Shadows High School and art classes at Paradise Valley Community College at night.

“Hidden in the Hills was the one thing that kept me alive in my community as an artist,” Ray says. “It gave me a depth of experience that I could share with my students.”

While she has always worked with clay, Ray was also weaving 20 years ago. Now “the looms are in storage forever,” and her creativity has evolved to include mural paintings and more whimsical, expressive mixed media animal sculptures. Her work also has developed to include more Raku pottery.

Sharing with the Community
When the Sonoran Arts League board approved the first Hidden in the Hills artist studio tour 20 years ago, no one could have guessed how much the event would affect the League, its members and the community.

This year’s 20th annual event, which is co-chaired by League executive director Pat Bell-Demers and board member, gourd artist and studio host Jane Boggs, features 188 artists at 47 studios, a phenomenal accomplishment that none of the original participating artists could have imagined. Even more impressive is the fact that the Sonoran Arts League, which had fewer than 75 members in 1997, now has more than 650 members.

“Our mission and the one critical requirement of every participating artist have never changed,” says Boggs. “We must all be able and willing to share our process and inspiration for creating our art.”

Education has always been a key goal with Hidden in the Hills. While the Youth Art Studio 1 started off at Desert Foothills Nursery, the exhibit moved to Desert Foothills Library several years ago. Now, students in third through 12th grade submit their work to be juried into the exhibit in the spring. This year, 120 pieces were submitted for review and 50 pieces were chosen to be on exhibit at the library from November 1-29. A free celebratory reception will take place on November 10 from 6 to 7 p.m.

All eight artists who were part of the first Hidden in the Hills tour say they’ve developed a special bond, just by being part of the event for the past two decades. Several commented on how rewarding it is to form friendships with returning patrons and have the chance to meet new visitors.

“It has given us a chance to make a difference in the community we love,” Darbyshire says, “and it justifies spending our lifetimes doing what we do.”