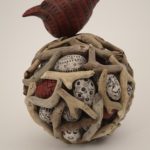 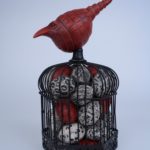 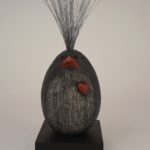 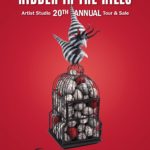 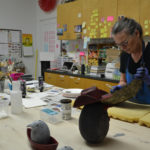 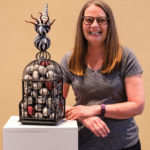 If ever there was an artist who could inspire others to follow their dreams, it’s Linda Korstad. The South Dakota native overcame many hurdles on her way to becoming an accomplished mixed media sculptor, but she never gave up. Her hard work and persistence paid off, as Korstad’s whimsical piece, “Wishing and Hoping,” was chosen by the nonprofit Sonoran Arts League to be this year’s featured piece of fine art on the 20th annual Hidden in the Hills Studio Tour and Sale artist directory.

The artist directory has become a staple of the popular tour, which features a record 188 artists at 47 studios this year during the last two weekends of November. While patrons can customize and download a map at hiddeninthehills.org, the four-color, glossy artist directory includes a comprehensive listing of participating artists with an image of their art; a large, easy-to-read map of the studios; and advertisements from participating artists.

Carole Perry, the event’s marketing chair, says the artist directory has become a collectible over the years.

“Back in 1997, our budget for the entire tour was $250, so we didn’t start printing the artist directory until 1999,” says Perry, a glass artist who has opened her studio to patrons for all 20 years of the tour. “Our first cover featured a brilliant piece by Claudia Hartley. As Hidden in the Hills grew, we found that people not only collected the directories, they looked forward to learning who the featured cover artist was.”

Each year, participating artists are invited by the Sonoran Arts League to submit original pieces for consideration during a cover artist selection process, which took place in May. More than 100 pieces of art were submitted before the committee chose Korstad’s piece for this year’s milestone anniversary artist directory.

“There were some amazing entries, as there are every year, but Linda’s sculpture stood out,” Perry says. “We all actually wanted it for the cover last year, but as we were using multiple images that year, we couldn’t seem to make it all fit together aesthetically. The minute we saw her submission this year, I think everyone knew this was the absolute statement piece for our new directory image, and it had to fill the cover.”

A Scottsdale resident, Korstad exhibits her work in a Prescott gallery, Van Gogh’s Ear, and she has been a juried artist in the prestigious Sculpture in the Park Show and Sale in Loveland, Colorado for eight years.

Her career path took her on many turns, and it wasn’t until she gave herself permission to completely trust herself that she pursued sculpting as her vocation.

“I pursued art several times during a span of 30 years. There was something holding me back each time, but I always ended up returning to art in the form of photography, printmaking, painting and now sculpture.”

With a business administration degree, Korstad landed a job in her 30s in advertising. Following her love for animals, she eventually settled into a career of training, exhibiting and breeding Afghan Hounds, a striking breed of dogs known for their long silky coat and aristocratic, aloof demeanor. Her love affair with these hounds combined with hard work lasted 25 years, and resulted in many nationally-recognized champions.

When a back injury made it difficult for her to continue her passion with the Afghan Hounds, she decided to revisit her first love and explore the possibilities of art-making.

She was drawn to working with clay, and with the encouragement of her husband, Greg, she immersed herself in her work. She also made a point of surrounding herself with talented ceramist friends and seeking the help of mentors.

“I’m like a little fish in a big pond,” she says of her artist colleagues, whom she holds with such high regard. “Being in their presence inspires me to be better.”

Her whimsical creations begin with clay components using iconic shapes and forms. These components combined with found objects are reconfigured in a subtle, contemporary way, with a slight humorous spin to create her mixed media sculptures.

“I love to incorporate recycled materials in my work,” she says, adding that she’ll sometimes spend the day scouring thrift stores, flea markets and antique shops for quirky items. “I spend a lot of time experimenting with repetitive concepts, so I’ll often buy multiples of oddities and store them in my studio bins until I’m ready to play.”

Her colorful studio houses two kilns, dozens of paint canisters and glazes, buckets of brushes and bins of sculpting and texturizing tools. It is full of sculptural pieces in various stages of completion.

“Sometimes I’ll start a piece and need to wait until that special something shows up to complement it,” she says. “When working with clay using hand-built techniques, I’ve learned timing is everything. It can be a hurry-up-and-wait process, but the time is worth the wait.”

Yellow Post-it notes and magazine clippings are strewn around her studio, helping her keep track of her thoughts and inspirations.

“When ideas come to me, I add them to the list, and Greg helps me organize my list of lists,” she says, laughing.

Korstad, who will exhibit and sell her mixed media pieces at studio 14, says she still has to pinch herself about being selected as this year’s Hidden in the Hills featured artist.

“Becoming a full-time artist has been quite a journey, and being recognized in this way is a true honor,” she says. “My current work is the result of working with a talented team of mentors and my intense drive for pushing the materials to a high level of finish. Although the prospect of getting the work to a higher level can be daunting, I have learned to surrender and just let things happen.”

The Sonoran Arts League is selling the 20th anniversary Hidden in the Hills artist directories for $5. Proceeds help raise funds for the League’s youth scholarships and other educational programs. The directories can be purchased at the League office at 6051 E. Hidden Valley Dr., Ste. 2.