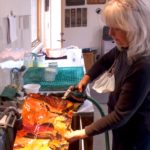 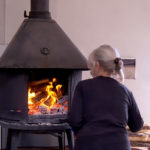 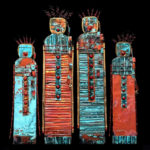 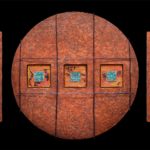 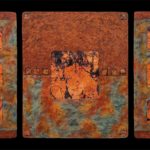 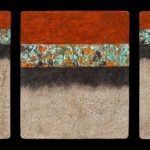 Mixed media artist Kara Young pulls a sheet of copper out of her wood-burning stove and washes away the ashes. As she studies the patterns and colors created by the fire, her mind drifts back to when she first learned burned copper can be beautiful — the day she lost her home and art studio to the Oakland Hills Firestorm in California.

Once a month, Young dedicates an entire day to firing copper for her art. Her contemporary pieces will be on display and available for purchase during the 23rd annual Carefree Fine Art and Wine Festival on November 4-6, along Ho Hum and Easy streets in downtown Carefree.

“Fired copper is the signature of my work, and it becomes the personality of each art piece I create,” says Young. “I don’t know what my art would look like today had the Oakland fire never happened.”

It has been 25 years since Young lost her home to the firestorm. She and her husband were out buying plants for the yard when they noticed a large plume of heavy smoke and drifting ashes from the fire. They rushed home to make sure no burning embers had hit their house.

When they arrived, they were given 90 minutes to evacuate. It was more than a week before they were allowed to return home. Their house, along with more than 3,200 other residences in the area, had completely burned to the ground. Only charred debris, the stone fireplace and chimney on the concrete house slab remained.

As Young dug through the rubble, she found several rolls of copper she had been using in her home studio to create greeting cards and art pieces she called “Sacred Portals.” The burned copper had a very distinct and interesting look that eventually took Young’s work in an entirely new direction.

She saved the copper and several years later began using it to make a series of pieces called “Keepers of the Fire,” or “Fire Spirits.”

Today, she stands in front of a Swedish wood-burning stove from the 1940s, swapping out pieces of copper every five to seven minutes. She endures scorching temperatures as she creates her beautiful copper pieces, together with the natural forces of the fire. Throughout the process, she takes careful notes about the temperature of the fire and the length of time each sheet of copper burns in order to bend the fire to her will.

It’s hot work, especially during summers in Eldorado, New Mexico, where she now resides. To keep cool, Young drenches herself outside with a garden hose before returning to her studio to add more copper to the fire. She works until her clothes are dry and then heads back outside to cool herself off with the hose once more. She typically works for a full six hours on her burn days, getting the copper just right for her art.

“A fire seems so devastating, but you have to keep going,” says Young. “I want people who have been through a fire to know that there is good life after fire.”

In recent years, Young’s work has grown in popularity throughout the United States, Europe and Japan. She participates in festivals year-round and has shown her work at the Carefree Fine Art and Wine Festival for more than a decade.

The November festival launches Thunderbird Artists’ 35th season of award-winning fine art and wine festivals. This year’s season of shows will include new entertainers and an expanded selection of wine, microbrews and more.

“The ambiance of our shows can’t be beat, and patrons appreciate the fact that artists are juried into each festival,” says Denise Dale, vice president of Thunderbird Artists.

The show’s featured artist, Darrell Thomas, is well-known for his vibrant oil paintings. A Phoenix resident, he studied illustration at Utah State University and spent two decades working as a professional illustrator before leaving to pursue a full-time career in fine art.

The subject matter for Thomas’ paintings depends largely on where he is selling the pieces. For the Carefree show, attendees can expect to see a majority of Sonoran Desert paintings with a slightly different color variation than they’ve seen from him at previous Thunderbird Artists shows.

Dale says the 35th season of festivals includes new entertainers, as well. One of the highlights of the Carefree festival will be the steel drum musical stylings of Paul McDermand. A Scottsdale resident, McDermand is famous for his work with such big-name entertainers as Tony Bennett, Johnny Cash and the Temptations. He began releasing his own albums in 1997.

“We’re very excited to have Paul performing this year,” says Dale. “His steel drum and marimba music will be a big attraction to our patrons.”

The festival also combines fine art with an extensive collection of domestic and imported wines and microbrews for tasting. For $10, patrons will receive an engraved souvenir wine glass with six tasting tickets, allowing them to walk the streets of downtown Carefree sipping samples, enjoying superb art and listening to live musical entertainment. Additional tasting tickets may be purchased for $1.

Admission to the Carefree Fine Art and Wine Festival is $3 for adults and free for children 17 years and younger. Parking is free all weekend.