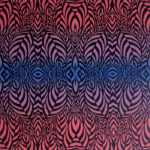 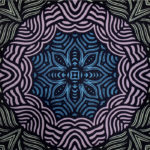 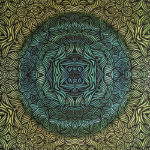 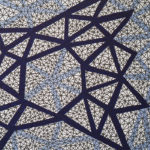 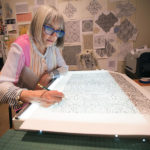 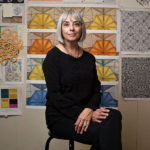 Janet Towbin creates art from intricate patterns. Her pieces draw the viewer in closer and closer, until they are enveloped by the beauty of small details that are practically lost in the hurried rush of modern life. To see the world through Towbin’s eyes is a meditation on beauty in the smallest details.

Towbin’s award-winning work isn’t confined to one medium. In addition to drawing her signature intricate patterns, she creates paintings, etchings, photographs, prints and collage, and sometimes layers multiple techniques in a single work. She’s always working on several things at once and keeps thick books full of sketches, tracings on rice paper, and various iterations of pieces in development.

Escher-like tessellations are among her current projects. In layman’s terms, the process involves taking one shape, creating patterns that fill the shape, then multiplying and expanding out until a larger pattern is completed. She scans her sketches and uses computer design programs to resize, repeat, flip and mirror the original patterns, drawing layer upon layer. Producing the intense detail of the final product is a lengthy process.

“A lot of my art practice is asking, ‘What would happen if …?” says Towbin. “That’s really what pushes me. What would happen if I changed this or moved this part that way, or twisted it here or flipped it there?” There’s a lot of exploration of shape and form and line and it’s all to get as much movement as I can in a pattern.”

Some relief prints are made using laser-cuts. For others, she painstakingly carves designs into linoleum. The small runs of prints are a testament to her eye for quality.

In Towbin’s light-filled home studio, shelving is adorned with eye-catching bits of inspiration: seashells, sleek wooden blocks that she has painted with nail polish, small sculptures, brightly-colored children’s toys, a stone from a dear friend that became inspiration for one of her drawings, decorative boxes, and ceramic pots made by her husband. The walls are covered with a mix of completed works and works in progress — a collection of drawings, etchings, notes, and photos. It’s clear that she embraces every element of the process, from inspiration to completion.

“My point of view is that there’s always another step in my work, another level to explore,” says Towbin. “That constant searching leads me to new discoveries.”
These days her attention is drawn to tribal tattoos, embellished floral patterns from classical drawings, nature — particularly leaves — and patterns found in lace and netting. Photographing items against varying backgrounds is another tool she uses to see with new eyes and play with color and pattern.

Her design experience shines through in the way she can duplicate and shift a single element, fitting the pieces together like a vast puzzle that entertains the eye and captures the imagination.

“I’ve always made art,” says Towbin. “As a child, my happiest moments were with crayons and paper and pencils and drawings. Making art has always been a part of my life.”

The Cincinnati native first attended the University of Cincinnati Design, Art, Architecture, and Planning as a fashion design major. Towbin soon discovered that being a fashion design major included sewing and pattern-making, which she wasn’t at all interested in learning. Instead, she found a different path in her favorite basic coursework: mechanical drawing, graphic design, and art history. Though she remains a fashion enthusiast, she switched her major to art history and took every studio class she could, including drawing, painting, and ceramics.

Over the years, Towbin’s career experience varied from fashion retail to textile and wallpaper design, art professor to exhibit curator.

While in college, Towbin met her husband, Dr. Richard Towbin, division chief of pediatric radiology at Phoenix Children’s Hospital. While a doctor and artist may appear at first glance to be an incompatible right brain/left brain pairing, both their careers are image-based and they share a love of art, often producing work together over the years. They are the parents of two grown children and have three grandchildren. His career necessitated multiple relocations that included Cincinnati, Los Angeles, Detroit, Pittsburgh and Philadelphia. With every new city, Towbin found new creative opportunities and gained increased recognition.

An 11-year stint in Pittsburgh really marked the beginning her full-time career as a fine artist. It stands out in her mind as a time of great growth and connection. It’s also where she met her mentor, artist and art critic Harry Schwalb. Now 93 years-old, his photo hangs in her studio and it’s clear that her friendship with him was a big part of what made Pittsburgh so special.

“I really accomplished a lot in Pittsburgh,” says Towbin. “The city has an extremely vibrant art scene. It’s an edgy place, but very livable. I had shows and was involved in the arts community. I served on the board of directors at Pittsburgh Center for the Arts, and organized and curated exhibits.

“The museums are amazing. Andy Warhol was one of the most famous artists to come from Pittsburgh and many of his teachers and peers were still alive and working when I was there. The curators and art leaders were very accessible. There was and still is a great creative vibe to the city.”

In Philadelphia, she produced etchings with master printmaker Cindy Ettinger, and her time in Ohio and Pennsylvania has resulted in her work being included in the permanent collections of Carnegie Museum of Art (Pittsburgh), Butler Institute of American Art (Ohio), Westmoreland Museum of American Art (Greensburg, PA), the Heinz Endowments Collection, the Free Library of Philadelphia Print Collection and Arcadia University (Glenside, PA). She still exhibits in New York, Philadelphia and Pittsburgh.

In 2007, a position at Phoenix Children’s Hospital brought the couple to their current home in Paradise Valley, which they’ve renovated extensively over the years. Starting over again in a new town was a challenge, but her talent draws attention here, too.

Towbin’s drawings have been shown at Modified Arts and Mesa Contemporary Arts Museum. She has collaborated with local printmaker Brent Bond of Santo Press for an exhibit at Phoenix Sky Harbor Airport entitled “Santo Press: Finding Relief in the Desert.” She has also hosted studio visits with Contemporary Forum from Phoenix Art Museum and Brandeis women’s group.

“I’ve made wonderful connections here over the past few years,” says Towbin. “I’ve met some very special people with incredible stories. Working with and getting to know Brent Bond, Mark MacDowell, and the artists at Cattle Track has been fantastic.”

Towbin was an artist in residence at Mesa Center for the Arts’ Print Studio, has taught printmaking at Arizona State University, and recently collaborated with Bond and MacDowell to produce “Kaleidoscope,” a series now displayed at the Andaz Scottsdale Resort & Spa, among other pieces of hers that have been integrated across multiple mediums at the art-filled resort.

Towbin is enjoying her life, her family and her art. She is happy to live a life that allows her to keep creating art and that gives her the chance to visit her children and grandchildren.

“I’m really not missing anything,” says Towbin. “I’ve got it all. It’s a good life.”