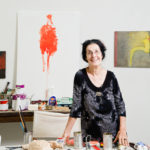 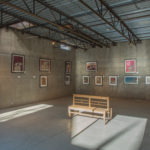 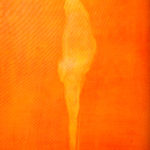 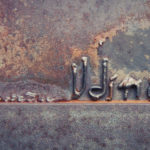 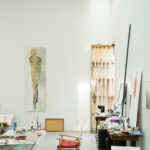 When most people think of contemporary art, they think of abstraction. But Agnese Udinotti wants to make it clear she’s not an abstract artist — she’s a figurative artist.

The first thing she does when I visit her studio is give me a history lesson. It’s a fire hose of information as she details the history of abstract art, the difference between abstract and figurative, and the man behind the promotion of figurative art as a major mode of visual expression: Peter Selz.

The thing is, abstract art academically appeals to Udinotti, but her heart has always been in portraying the human figure. It’s her passion.

“I never considered anything else,” she tells me. “To not do the human form is boring.”

For Udinotti, figurative art doesn’t mean a realistic representation of the human form, however.

“You have to consider that we as human beings are an embodiment of emotions, intellect and all kinds of sensitivities and senses,” she tells me. “Now put all of this together and express it through the human form. It’s very powerful; it’s not just a visual exercise. It incorporates everything one has.”

Udinotti welds, paints, sculpts, prints and makes jewelry. Everything she does includes the human form in some way, from her large oil paintings to her small steel brooches.

But she’s firm on one point: her art has little to do with visual reality.

Udinotti tells me when she creates art, it’s like her “two fingers are the extreme endings of [her] soul.” With these, she records not what her eyes see, but what her soul embodies. The pencil describes what is inside, and emotion comes through her onto the paper.

She starts her oil paintings by putting down color. Then she looks at the surface and tries to see what is behind it, pulling the figure out of the painting.
“It’s like communicating with figures of the past, figures already there,” she says. “They wait for me to uncover them.”

Udinotti moved from Greece in 1958 to pursue a bachelor’s in fine arts at Arizona State University. She then got her master’s in art history.

Afterward, she turned a Scottsdale barn into her studio and gallery. It was 1964, she tells me, and Scottsdale was mainly fields and farmland. She’d ride her bike to work, occasionally popping her tires on cactus needles.

The gallery Udinotti now inhabits is on the Scottsdale ArtWalk. She’s been there since 1971, promoting the visual aesthetic she is passionate about.

In 1999, Udinotti purchased a historic Paradise Valley house and built a studio next door. Slowly, the studio grew, as did her own personal art collection. It was 2006 when she thought to herself, “At some point, the public should come in contact with figurative art. But there’s no institution that specifically studies and exhibits art of the human form.”

So Udinotti decided to make one. She donated pieces of her artwork as well as her personal collection, and gathered others from donors. Udinotti housed the museum’s permanent collection in her already existing studio structure. She built a courtyard and an underground structure (so as to not block the view of Camelback Mountain) to house the museum’s rotating exhibits.

In 2008, the Udinotti Museum of Figurative Art officially opened. Udinotti’s goal for the museum is to educate the public on the historic evolution and importance of figurative art.

The museum hosts two exhibits a year: one in March, and one in November. The March event is a juried exhibit of local artists’ work, while the exhibit in November usually focuses on how the human form has been portrayed by a specific people group or historical period. The show this November will feature Victorian art, and Udinotti shows me small porcelain dolls from the 1800s that will be included.
Inside the 6,500-square-foot cement and glass structure, you’ll find paintings, carved masks, photography, sculptures … you name it. Udinotti is a wealth of knowledge, too, gliding through the bright airy rooms, pointing to pieces and spouting out names, dates and influences like a textbook.

Hungry for some art exploration? She gives personal tours Sunday or Monday, but it’s by appointment only, and only 300 to 500 see the museum per year. A tour is $10 per person, but it’s worth that just to talk to Udinotti. She tells me she likes to give tours because she knows the vision and she can translate the emotional enthusiasm that comes with a piece of art.

“I breathe it,” she tells me. “When I look at a piece of art, I am there. I eat it up.” Her fervor is palpable, and her passion will leave you breathless — in a good way, of course.

You can also catch her at her gallery, which hosts 300 to 400 pieces. In the summertime, it’s just the main exhibition, but it changes monthly during the season.

I ask her how she manages the museum, gallery and studio. The museum has a board of directors, and volunteers assist occasionally.

The most exciting thing for her is the energy exchange that comes when handling pieces of art.

“[The artwork in the museum] is immensely beautiful, immensely important,” she says. “Touching something that carries that energy is incredibly exciting to me.” Her museum, gallery and studio all buzz with that same quiet energy.

Udinotti has built a space of reverence and reflection for what she loves: the human figure. After spending just a short amount of time with her in that space, I already have a deeper understanding of what it means to be human — to live in a body and see others for body, spirit and soul.

It is a transcendental and beautiful thing.