FOUR! Quartet of Golfers Lead BC 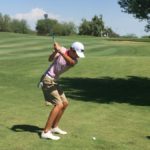 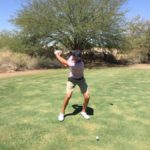 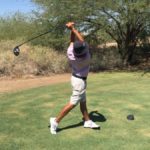 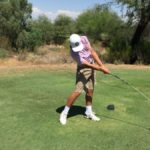 If you spend time at golf courses, you hear the term “long game” used quite a bit. It is definitely in the air at Boulder Creek High School, where the ace golfer is riding a growth spurt to put distance on his drives. Simultaneously, the BC coach is developing a long game to strengthen the foundation of the Anthem youth program.

Though just a sophomore, Mason Domecq is the rising star of the BC boys’ golf team. But he doesn’t have to worry about trying to carry the team; he regularly has three or four teammates nipping at his heels, helping the team score while battling him for the No. 1 spot. Senior Sean Poling, junior Cooper Frenak and sophomore Aidan Volmer are all golfing strong as the fall season heats up (in inverse proportion to the weather).

“The top four have a nice rivalry,” says coach Chris Endres. “It’s a friendly competition to see who’s going to be top out of the four.”

Endres is in his second season coaching the boys’ golfers. You may know him as the PGA teaching professional at Anthem Golf and Country Club, where he has been teaching golfers how to maximize their power and refine their technique for 15 years.

Before coming to Anthem, he had quite a career as a golfer, winning the 1989 Colorado and Kansas Opens, the 1987 and 1995 Southwest Section PGA (SWSPGA) Assistants Championship and the 1995 and 1998 SWSPGA Match Play Championship. Endres also competed in the 1991 U.S. Open, 2001 Phoenix Open and the 2011 U.S. Senior Open, as well as qualified for the PGA of America’s Professional National Championship eight times.
The most dangerous two words in the English language may be “some” and “day,” when used in combination. That being said, someday Domecq just might follow in his coach’s footsteps as a professional golfer.

Domecq’s long ball has really come around in the last year, thanks to a growth spurt.

“For a time, he didn’t hit the ball as far as some of the other kids,” says Endres. “Now, he’s pretty much caught up. He’s more than caught up now.”

Sounding like a team player who talks “we” rather than “me,” Domecq was enthusiastic on the front nine of the year: “Golf season has started off great. We placed third at our first 36-hole tournament out of 11 schools and tied for first at our first nine-hole tournament against three other teams.”

At the Aguila Invitational last month, the team finished third, led by Domecq’s two-day total of 153. Poling and Frenak were right behind him, at 156. Endres was particularly proud of a strong finish, with BC coming in with a team low score on day two.

Domecq stresses the team goals of qualifying for the state tournament and improving on last season’s 11th-place finish. Endres says the goal is always for the team to qualify for state.

“What has changed over the years is the degree of difficulty,” he says. “It’s pretty challenging.”

Domecq (the “q” is silent) had a big summer, winning a Dobson Ranch tournament that qualified him for the IMG Academy Junior World Golf Championships in La Jolla, California. He plans to keep rolling in his school season.

“My goals individually are to improve my nine-hole scoring average from last year and ultimately to win state, which will be challenging considering the competition in our league,” he says.

Endres sees a path to a scholarship offer for his steady lead golfer.

“There’s not a question if he stays on the track he’s on now and continues to improve the ways he’s improved over the last several years,” he says. “I don’t want to put too much pressure on him, but I look for him to contend for a state title. And I don’t have any question he’ll go somewhere to play golf, for sure.”

For Endres, just as important — if not more — as developing individual golfers at the high school level is developing the youth golf program around Anthem. That’s the real “long game” in Anthem golf.

“Last spring, Diamond Canyon, Gavilan Peak and Anthem School added golf teams,” says Endres, who cited GP principal Chad Segersten as a key figure. Though the young golfers may end up going to other high schools, Endres says, “Wherever they go [to high school], they’ll be ready to play — or at least be more prepared, as ready as they can be to make the team. As freshmen, kids are coming in and competing against upperclassmen. That’s tough.”

The coach was only able to keep 11 golfers on the varsity team, so there were several cuts.

“If I have to cut a kid in his freshmen year, I’m afraid he’s going to quit golf completely,” Endres says. “So I reached out to some parents of the kids who didn’t make the team and said, ‘Let’s get them ready now for next season.’ I’m going to take an active role in their skill development.”

As for the 11 who are golfing for BC, they sound like a coach’s dream: no problems, no drama, just dedicated to improving.

“We’ve got good kids on the team,” Endres says. “I think that golf lends itself to kids who are pretty good, solid citizens; good students, very respectful kids. As far as coaching goes, it’s really easy for me. I just have to steer them in the right direction.”