Taking It By the Book: David Court 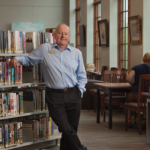 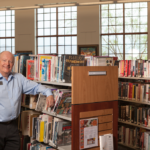 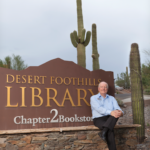 At the Desert Foothills Library, you can find:

In the aisles of Desert Foothills Library, David Court is a rock star. Though he lacks a swagger and the button-up shirts he wears are far from flashy, when he steps inside this building, he’s a hero.

This is not the library of 20 years ago. For the last eight years, Court has championed the library, once dubbed the “Little Library that Could,” and turned it into a trailblazer.

Thanks in large part to his direction and efforts, the Cave Creek library has evolved into a repository of over 50,000 books, DVDs, music CDs and audiobooks, and also into an event center, a social hub and a place to learn everything from bridge to Spanish.

“It’s so much more than a library,” he says with the non-rhotic accent of his native United Kingdom. “The library has become a meeting place for the whole community where people can come and check out all kinds of items, but they can still meet for all sorts of reasons,” Court said.

“It’s a safe and quality environment to go to, and it’s available to everyone without exception.”

As if on cue, a line of people files in, heading toward a large, partitioned meeting room. “It’s movie night,” Court explains. Inside the room are about 30 people just getting seated for the weekly event.

These are among the approximately 100,000 people who will visit the Desert Foothills Library this year, a number that is growing annually. It’s not a small feat in an age when print books are rapidly being replaced by digital media.

Court has managed to anticipate the changes, while at the same time, keeping his finger on the pulse of the unique community he serves. More people are now discovering how to publish an ebook and as such, eBooks are becoming increasingly popular (the library saw an 11 percent increase in eBook downloads last year). Court recognized years ago that, in order to survive, the library needed to create an entirely different identity for itself.

Now, less than a decade after he began, his annual budget has grown from $569,000 in 2010 to $850,000 this year. That doesn’t include the $2.2 million expansion completed this year, money that was raised partly through a successful capital campaign.

That campaign enabled the board to accommodate the most rapidly growing portion of the library: programming. Just as they embrace movie night, the community was so enthusiastic about the speaking engagements, musical presentations, classes and other special events that the library simply didn’t have room. The parking lot was overflowing, and regular patrons felt turned away. In addition, there were more potential presenters than the library could accommodate.

Money raised in the capital campaign was used to expand the meeting space so that programs, such as the candidates’ forum that drew a crowd of 137 last month, could have a place at the library. In conjunction with this, an additional 50 parking spaces were added.

“While the library tries to provide benefits for the people who donate, Court believes that many people believe in the business model and the services provided. “If It’s important to people, and they donate. However, services are provided free for many people. I think that’s a really good model to follow.”

Admittedly, it’s a model that’s not for everyone, yet the Carefree, Cave Creek, North Scottsdale and North Phoenix community the library serves has always come through.

“If you were to pitch this library model up and put it in most places, it wouldn’t work. It wouldn’t have as supportive a community as it has here.”

Part of the beauty is that, Court explained, the library is what you make it. “For some, it’s a place to get a book, but for others it’s a social place, or a place to learn new things and build a sense of community. It really is whatever you want to get out of it.”

For Court, the success of the library has been an important chapter in his own life. Sixteen years ago, lured by the American dream, Court walked away from the commercial real estate management position in the South of England. His wife, Deborah, who is a nurse, took a job as clinical coordinator at Abrazo Central Campus, and Court obtained his real estate license here.

If someone had told him he’d one day be executive director at the Desert Foothills Library, he’d have hardly believed them.

“It certainly was a career change,” he said, “although I did volunteer at the library. I was part of the Thursday crew.

“A lot of skills I had for my previous jobs have played a big part in what I do here.”

Court’s business mind may be what has helped to propel the Desert Foothills Library into the future, but it’s something a little more esoteric that draws people to Court, and to this library.

The library has become an embodiment of the passion that Court and the not-so-small army of staff and volunteers have put into building something wonderful for everyone to share.

It’s more than a library; it’s a place where everyone can belong.