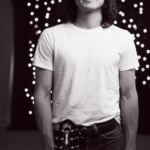 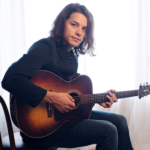 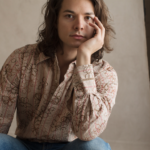 Musician, songwriter and producer Drew Tyler is home from Los Angeles for a brief visit when he sits down to talk with me. He’s got an easy smile and boy band good looks, but behind the made-for-an-album-cover exterior, Tyler has talent and a work ethic that have taken him from making a racket on his first drum set at age 2, to a 26-year-old who’s about to release an album of his own under the name “Fly Felix.”

“I’ve played music my whole life and I was always surrounded by it growing up,” says Tyler. “I was lucky enough to have family members who were in the music business and who encouraged me.

“I went in phases of liking different instruments—first drums, then guitar—and even tried making short films when I was younger. It wasn’t until high school that I took a songwriting class. That really had a huge impact on what I do today.”

The North Valley native says those teen years, influenced by the sounds of The Strokes and Radiohead, were some of his most prolific in terms of songwriting. His style then was younger and definitely more pop than the indie rock sound of the Fly Felix project, “3 Gallons,” so-named because the amount of bartending tips he saved to finance the production filled a three-gallon water jug. Its first song, “Beautiful Animal,” will hit the airwaves this October.

Some of Tyler’s earliest influences were The Beatles and the 60s and 70s rock that his guitarist father enjoyed, along with his more recently appreciation of psych rock bands like Tame Impala and Half Noise.

“When I went to NAU, I joined my first band, Flight of Ryan. I played lead guitar, but we eventually parted ways” says Tyler. “They’re still performing now and they’re good friends of mine. They were ready to leave school and launch out on their own, but at the time, I wasn’t convinced that I could make music my career. I decided to stay in school one more year to finish my degree. I figured I needed to fund my musical hobby.”

He did get that biology degree, which met his passion for learning about all things in the natural world. He funded his way through college as a bartender (something he still does on weekends in West Hollywood), which was great for meeting people and getting his name out there; after all, you never know who you’ll meet.

His mom always said that he’s a natural-born salesman and if he gets the interview, he’s certain to get the job. She’s been right all along, as moms usually are.

As it turns out, that final year was the origin of what his music career is today. He became intent on writing and recording his own music and now plays guitar, bass, keys and drums, but he’s also intensely curious and collaborative.

In 2015, Tyler moved to Austin, where he immersed himself in the music scene and decided to create the Fly Felix project. The name began as his DJ alias, a name that gave him freedom to experiment. It allowed him to write and produce pop/EDM tracks featuring different vocalists while he was still performing as Drew Tyler, including at an appearance at the famed SXSW festival.

“Austin was a hugely transformational period for me,” says Tyler. “I moved there to discover my sound and to meet other songwriters and musicians. I went with an open mind, knowing that I wanted to be involved in something new. I learned so much there that the transition to Los Angeles was relatively seamless.”

When he met then-15-year-old Maggie McDavid, who now performs as MAAGS, it was supposed to be for a single song, one that he wrote. They ended up writing 15 more songs together.

“Within a few weeks of working with her, I fell in love with her voice and songwriting,” says Tyler. “She’s one of the most talented people I’ve ever met. She’s so young, but she’s an old soul. I didn’t want to stop working with her.

“I became close with her family and I’m now managing her. She’s moving to L.A. and we’re taking a lot of those songs we wrote together for a four-song EP release in the fall.”

Tyler produced that EP, titled “If California Calls You Home.” It will add to two already-released independent singles, “Born to Shine” and “Love Someone,” which Tyler co-produced with David Marinelli. They were released on July 13 with a message of love as an antidote to violence.

The radio-friendly pop is bright and inspiring, but listeners will enjoy another side of MAAGS when the more acoustic, reflective “Like A Feather” launches the EP.

Tyler’s desire to work with many artists in multiple genres inspired him to create the Angel’s Collective, an umbrella under which he assembled producers, booking agents, bloggers, musicians, photographers and visual artists who wanted to help each other reach their industry goals with whatever strengths they possessed. Now, he’s brought the collective to Los Angeles, and with the help of business partner Eric McDermott, it will continue as a cooperative and as an independent music label, with goals to expand it to other creative pursuits.

“We don’t want to limit ourselves to one genre or area of creativity,” says Tyler. “We’re starting with the music, but we want to release quality art that is inspiring. We want to grow something beautiful that’s not based on ego. We want to stay true to each other and have an equal distribution of talent and skill sharing.”

Between leaving Austin and moving to L.A. on New Year’s Eve of 2018, Tyler spent months at his family’s cabin in Munds Park with only his instruments and recording equipment to keep him company. It was an incredibly creative time and the songs he wrote and recorded are the seeds of his upcoming album, “3 Gallons.” It’s an exercise in patience, but he’s learned to trust the process.

“I’ve never worked so hard in my life because I want it to be perfect,” says Tyler. “I love performing live and for a long time it was hard to accept that this was going to be a long process. I’ve realized, though, that I have to appreciate the process, no matter how long it takes, because it will be worth it.”

After the release of “Beautiful Animal” in October, he will continue with to release tracks successively in November and December, with the full seven-song EP coming out January 2019.

One of the things that will shine through for listeners is the value Tyler places on the old way of recording albums. He loves the sound of instruments performing live together on a “real-sounding” album that can easily translate to being performed live on stage.

“With all the technology at my fingertips, I’ve found that what I really want is stripped down authenticity,” says Tyler. “I’m really excited. A lot of these songs are near and dear to me. It’s like my life’s message and the way it’s recorded feels like my own. I know it will translate well to live performances.”