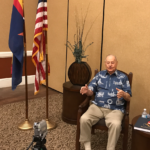 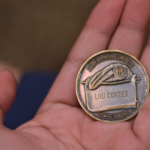 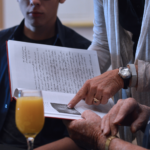 History often takes the form of a memorial, an engraved plaque or an entry in a book. If we’re lucky, we get to meet someone who embodies history, whose stories and scars bring the past to life in vivid detail.

At 96 years old, US Navy Lieutenant Commander Ret. Lou Conter is one of just five living survivors of the USS Arizona. High school students who participate in Veterans Heritage Project are the fortunate ones who hear and document his account of that fateful Sunday, Dec. 7, 1941.

Conter’s account will be recorded in the Veterans Heritage Project’s 14th annual hardbound edition of “Since You Asked.” He and other contributing veterans will attend a free, open-to-the-public celebration and book signing Sunday, April 8 at DoubleTree Resort in Scottsdale from 3 p.m. to 6 p.m.

Founded as an after school club in 2004 by Cactus Shadows High School teacher Barbara Hatch, Veterans Heritage Project is now a non-profit organization with a mission to connect Arizona’s middle school, high school and college students with veterans in order to honor their contributions, preserve America’s heritage and develop future leaders. Out of it has come the Veterans Speakers Bureau, which has reached 17,000 students statewide in the past two years.

Participants in nearly 30 chapters throughout Arizona hear classroom lectures, volunteer in the community and conduct oral history interviews. To date, nearly 1,500 video interviews have been permanently preserved in the Library of Congress, along with donated volumes of “Since You Asked.”

Conter’s memory is sharp as he tells of his experience at Pearl Harbor as a 20-year-old Quartermaster. That morning, he was on the quarterdeck, tasked with helping to navigate the USS Arizona out of port. His position saved his life.

“Three more minutes and I would have been on the bridge with the rest of my crew and would have been killed,” says Conter. “Many reports have said that the men on the USS Arizona were asleep when the attack began. That’s untrue. We knew something was going to happen with the Japanese, we just didn’t know when. But we were ready for it. The men were at their battle stations and the guns continued to fire long after the deck was in flames.”

Just 13 minutes into the attack, a blast penetrated five steel decks, exploding more than one million pounds of black powder in the forward magazines. Conter recalls that the impact caused the massive 34,000-ton, 608-foot battleship to raise 30 to 40 feet in the air. For nearly two and a half hours, crews battled fires and the able-bodied few saved as many as they could, all while attempting to keep flames away from the dead and wounded.

“We just did the job,” says Conter. “It wasn’t easy, but we were well-trained. Every man displayed toughness, dedication and resolve.”

The senior surviving officer, Lieutenant Commander Samuel Fuqua, fearing that the wounded would drown if they successfully leapt overboard, gave orders to restrain the wounded or knock them unconscious so they could be safely loaded into lifeboats bound for hospitals on shore. It was a simultaneous exercise in rescue and survival.

“I tried to save as many as I could, but only got about 16 to 18 men out,” says Conter. “The skin of the burned men came off in our hands when we handled them.”

When the situation became too dire, Fuqua gave orders to abandon ship. That day, 1,177 sailors and Marines died aboard the USS Arizona. Just 335 survived.

The wreckage of the ship burned for three days and took several more days to cool off. Conter was part of the team that conducted shallow water dives to retrieve bodies and valuables. Maneuvering through damaged hatches and compartments was dangerous, and divers had the grisly task of lancing the bloated bodies of their fellow sailors so they could be pulled out of the ship and brought to the surface. After a week of dives, the mission was deemed too risky to continue.

Along with medals, photos and clippings, Conter still has the December 21, 1941 telegram informing his mother that he was missing in action. It wasn’t until after Christmas that his family in Colorado learned he had survived. For the next 50 years, he never spoke about that fateful day, but all that changed after the 50th reunion of Pearl Harbor survivors in 1991 when he and three other survivors were invited by a teacher to speak to his high school history class.

“The kids loved it,” says Conter. “We gave the straight dope about what happened that day and what Washington, DC was lax in. We don’t want it to happen again. Since then, we’ve briefed more than 25,000 high school students and they enjoy getting the firsthand information about what really went on.”

Conter’s Naval career spanned 27 years before retiring as a Lieutenant Commander in 1967. As a pilot serving in the South Pacific during World War II and the Korean War, Conter had some close calls and was shot down twice, but always returned to duty in short order.

In 1942, his Black Cat Squadron flew nighttime bombing missions in black-painted seaplanes. Once, anti-aircraft fire forced him down seven miles offshore in 10- to 15-foot swells without survival gear. The plane, engulfed in flames and still loaded with two 500-pound bombs, floated nearby as sharks circled the nine surviving crew members.

“Our First Class Petty Officer told the men to say their prayers … that we were about to die,” says Conter. “I said, ‘Bull! Stay together, hold hands and tread water lightly. Don’t panic. If you panic, you’re dead.’ We spent about 45 minutes holding each other up and punching sharks in the nose until a squadron flying overhead noticed us and dropped a lifeboat.”

The crew hid behind enemy lines in the jungles of New Guinea until they were rescued. The very next day, they were back in action.

Conter received the Distinguished Flying Cross for Valor for a daring mission to rescue 219 military intelligence operatives trapped behind enemy lines. Under cover of night, Conter and four other pilots flew low between the trees for 460 miles along the Sepik River, back and forth for three straight nights.

“There were over 12,000 Japanese troops less than a mile away,” says Conter. “Through the cloud cover, we could hear the Zeros coming for us. We flew back and forth, right under the noses of the Japanese, without a single casualty.”

In 1948, he attended Defense Intelligence School, and became an intelligence officer and original member of the Defense Intelligence Agency. His rich knowledge of classified information ultimately grounded his flight career during the Korean War. He knew too much for the military to risk his capture.

Conter credits much of his toughness to his rural upbringing. He was accustomed to walking long distances, using a rifle for hunting, and grew up with a survival sensibility. He had no aversion to hard work and studied voraciously so he could move up the ranks.

“My mind was different,” says Conter. “I wasn’t afraid of a mountain lion because I hunted them. I helped anyone who needed it from boot camp on throughout my career.”

During the Vietnam War, he helped to establish the Survival, Evasion, Resistance and Escape (SERE) program for the military, elements of which the Navy still utilizes today. Notably, Medal of Honor Vice Admiral James Stockdale, who spent more than seven years as a prisoner of war in North Vietnam’s infamous Hanoi Hilton, credits the training he received under Conter’s tutelage with saving his life.

“When he returned, he called me,” says Conter. “He said, ‘Lou, I want to thank for being so damn tough in that training because that’s the only thing that kept me alive in a POW camp for seven years.’ I thought that if even one person could say that, I didn’t care what the senators or representatives had to say about my methods. I knew I had done it right.”

For Veterans Heritage Project students, sitting face-to-face with a veteran like Conter, then researching and writing his story for historic preservation, is a priceless, character-building experience that instills civic pride, bridges the gap between the civilian and military population, and develops understanding of sacrifice, service and accountability in the next generation of leaders.