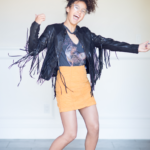 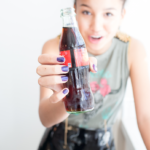 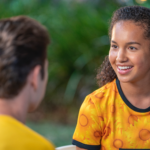 It’s difficult for most of us to imagine going through those awkward teen years in the spotlight, but for one Valley teen, not only is she doing it; she’s thriving beneath the bright lights of Hollywood.

A few months ago, Images Arizona had an opportunity to catch up with Sofia Wylie, whose stardom was steadily rising with the successful launch of Disney’s “Andi Mack.” These days, the 14-year-old’s future is shining brighter than ever as she’s just wrapped up filming for the starring role in her first feature film, “Back of the Net.”

Sofia has gained an impressive following among teens and tweens for her role as Buffy on “Andi Mack,” and for good reason. As a performer, she’s full of natural talent. In fact, she’s often billed as a “triple threat” for her abilities as an actor, dancer and singer.

She trained at Diverse Elements Dance Studio in Phoenix in ballet, lyrical dance, hip hop, jazz and contemporary dance, and she’s had the opportunity to perform on-stage with Justin Bieber and at Radio City Music Hall. She was a two-time finalist for the Lifetime show, “Dance Moms,” and also competed on “So You Think You Can Dance” in 2016.

Not bad for a kid from the Phoenix ’burbs.

Sofia is now back on set in Park City, Utah to film the third season of Disney’s coming-of-age series, but it’s been a whirlwind of a year for her and for her parents, Chris and Amy Wylie.

She just returned from Australia, where she rocked her role as the lead character, studious Cory Bailey.

“‘Back of the Net’ starts off with my character, Cory Bailey, getting ready for a Semester at Sea program for science,” Sofia explains. “Cory is very intelligent but she does not fit in well with her peers. She accidentally gets onto the wrong bus and winds up at soccer camp. She doesn’t want to be there at all and feels like a fish out of water, but while she is stuck at soccer camp, she finds friendship, love and who she wants to be.”

The movie’s release date has not yet been set, but her fans are already waiting with baited breath. She’s come a long way from her inaugural performance as an oompa-loompa in Musical Theater of Anthem’s production, “Willy Wonka”! Still, she credits those early days with planting the seeds for her current career.

“I loved being able to act, sing and dance for an audience all at once,” says the well-spoken teen. “I was pretty shy when I was younger, but performing helped me get out of my shell and made me become more confident in myself.”

She continues, “When I started performing, it gave me a way to express myself. It’s given me something to look forward to every day and I hope to perform for the rest of my life. Since ‘Andi Mack’ came out, I started to get recognized in public. To this day, it’s still really exciting to me, and it’s hard for me to fathom the fact that our show has such a huge following!”

On a more personal note, Sofia seems to have found her tribe on stage. The “Andi Mack” cast has been especially influential as the characters navigate often difficult-to-tackle, real-life situations. For example, it is the first Disney show to openly address LGBTQ issues. The show also addresses racial issues, which has been especially impactful to Sofia, who is biracial.

“In every storyline of ‘Andi Mack,’ as our characters are learning and growing as people, I know I am too. In one of the story lines, my character, Buffy, had to make her hair straight. At the end of the episode she realized that she didn’t have to change her appearance for anyone. This is something I went through when I was younger. I am very lucky that I am able to be a part of making an impact on people’s lives.”

At the end of the day, however, Sofia is still just a kid. When she’s home in Anthem, she loves binge watching “Vampire Diaries,” “Pretty Little Liars,” and other television series with her mom. She goes shopping, has a penchant for gluten-free pizza, and adores her older sister Bella, who earned her own bit of fame as a winner on Food Network’s “Chopped Junior” cooking competition.

The pieces appear to be falling into place for this budding star. In fact, lately she has been dubbed “The Next Zendaya,” whose own rise to fame followed a similar trajectory. It’s a promising comparison considering Zendaya’s most recent roles in “The Greatest Showman” and “Spiderman: Homecoming.”

Sofia has not-so-far-off dreams of continuing her acting career, but she sees more than that in her future, too.

“I have so much I want to do in addition to being an actress,” she explains. “I want to create a sanctuary for homeless, abused and injured animals. In 10 years, I see myself still acting. I hope to produce and direct as well.

“No matter what I am doing, I hope to inspire others. The most rewarding experience I have is when I’m able to give back to my community. Knowing that you can bring joy and happiness to someone’s life is the best feeling in the world!”

Of all the interviews she has done in the last two years, there is one question she hasn’t answered on the record.

“I wish someone would ask, ‘How do you think your generation and the generations to come, can change the world?’” she says. “I believe that we are the future, and by taking the time to help someone in need or just simply telling someone that they are amazing, you can make someone’s day. I am constantly inspired by the strength and bravery of kids all around the world, and I hope to be a part of that.”

And indeed, if anyone can do it, it will be Sofia Wylie who plays that part.