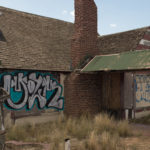 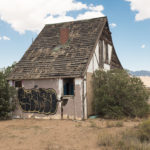 There’s not much to see along the five-plus hour trek between the Valley and Vegas. But on the way home, there’s Santa Claus, Arizona, a Mohave County town along southbound U.S. Route 93.

Linda Rhodes-LeRoux is among the many who experienced this vintage Arizona site dedicated to jolly old St. Nick during the latter part of its heyday.

“Everything was decked out in Christmas decor, and there would always be a guy dressed up like Santa Claus,” she recalls. “It was kind of odd, yet it was this cute thing in the middle of the desert.”

Linda first visited Santa Claus in the early ‘70s with her parents, when she was 17 years old. The Sunnyslope family traversed the long stretch of highway several times a year to visit a relative in the Las Vegas suburbs. They would stop in Santa Claus on the way home.

“Typically by the time we got there, only the store would be open,” Linda says. “We liked to look at all of the Christmas stuff. I remember my aunt bought a cactus ornament.”

Established in 1937 by real estate agent and entrepreneur Nina Talbot, the town was slated as the summer home of Mr. and Mrs. Claus. Dedicated to the glory and glitter of Christmas, its office sign read, “This is it! Santa’s Land.” Besides the office, the town included a restaurant with Dasher and Dancer omelets, among other things on the menu; a gift shop; and the Old 1225, a children’s train ride. Children adored it, and when Linda had her own, she brought them to stop and walk around, too.

“My daughter especially liked the wooden hand-carved statues out front,” she says. “There was an Indian and a red train. My son loved to climb in the train.”

Her family was likely among the last to visit, because during the late ‘70s through the early ‘80s, the town began to decline. After Talbot sold her interest in the city in 1949, several people worked to keep the town going. A remailing service was added, where a letter postmarked from the town was mailed for a small fee. But the dream faded as the years passed, and by 1995, it officially closed.

Now when tourists pull over, they find a small collection of abandoned buildings. Linda still stops occasionally; once, she found a homeless man sleeping there.

“It kind of upsets me that they didn’t protect it better,” she says. “They should have at least put up a fence.”

Out of curiosity, I pull over on a trip home to see it for myself.

Someone had the audacity to make a small tourist stop in the middle of nowhere, Arizona. This captivates me. Only a desert dweller would pioneer something from dirt and nothing. Talbot must have been a Renaissance woman to build Santa’s second home along this barren stretch. And, for at least several decades, she pulled it off.

Today, there’s a graffiti-ridden, dilapidated cottage. Pink candy-striped poles replace the original red. Seventy-something years later, the ruins remain relevant. The wishing well is worn out, but if I had a penny, I’d thrown one in for its restoration and preservation — for Linda, for the preservation of Arizona history and for Americana.