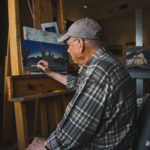 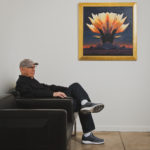 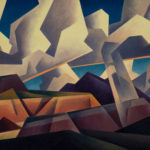 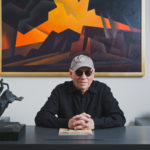 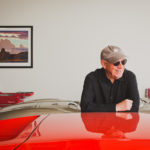 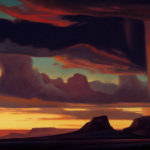 Ed Mell’s naturalistic landscapes are transportive masterworks that capture the sweeping vistas of the Southwest’s mountains, mesas, and monuments and the billowing clouds that soar above them. From his landscapes and figurative paintings to his bronze sculptures, Mell’s use of angle, light and shadow infuse his subjects with dramatic power and inspire a sense of awe.

It’s a perspective that first came about after the Phoenix native had ventured far afield to New York City in pursuit of a career in advertising, but an experience on a Hopi reservation soon made him realize his heart — and his home — were right back here in the Grand Canyon State.

Mell’s Coronado district studio sits just a few blocks from where he grew up. His gallery, which opened April 2015, is nearby in what used to be a small neighborhood grocery store. Gallery director Ken Richardson manages it with the participation of Mell’s wife, Rose Marie. It’s also the same area where he raised his two sons, Taylor and Carson.

Taylor is an artist currently living in Phoenix and Carson is a television writer and illustrator living in Los Angeles with a soon-to-hit-the-small-screen animated series for TBS. They grew up coming to Mell’s studio after school, soaking up the knowledge and camaraderie of their father and his fellow artists.

Mell himself spent his childhood immersed in art. In those days, he was always drawing and discovered his passion for the automobile, something that remains today as he is an avid car collector.

“In high school, I wanted to be a car designer,” says Mell. “Even in grade school I was drawing cars. It’s sort of a symbol of freedom, of the future, especially in the 1950s. Some of the artwork for concept cars was just off the charts. I have one or two pieces I’ve collected. Consequently, a lot of the cars I’ve owned match my aesthetic.”

After attending Phoenix Junior College, Mell attended Art Center College of Design in Los Angeles, where he studied to become an art director.

“I was able to get a good technical background,” says Mell. “Color theory, illustration, graphic design — all of the things I think are important, and I still draw on them.”

Mell landed jobs with Young and Rubicam, and with Kenyon Eckhardt in New York City, working on high-profile accounts and living at the speed of big city life.

“I saw people living the dream in New York, but it wasn’t my dream,” says Mell.

When a friend asked if he’d like to teach in a summer arts program on a Hopi reservation in northern Arizona, Mell jumped at the chance. In 1971, he spent the first of two summers teaching in the program.

“It was a nice escape,” says Mell. “I went from New York City to a village of 200 atop a mesa. The Hopi reservation and Monument Valley were new to me. There were so many things I hadn’t experienced until I came back. That was a big influence.”

By 1973, Mell had permanently moved back to Phoenix and began painting in oil. His graphic design background is revealed in his early work (though he still creates modernist pieces today) and it tends toward the minimalistic, with more muted colors and strong angles.

He soon met a legendary helicopter pilot who would afford him the chance to gain a perspective of the land that few have had the opportunity to see and it would change his future. Jerry Foster was a larger-than-life helicopter reporter for Channel 12 (KPNX) news and, after Mell threw out the hint that a helicopter offered the ideal vantage point for an artist, Foster offered a four-day trip. The only instructions were to pack light and to meet atop the KPNX building.

His adventure with Foster took him to the top of San Francisco Peak, to several of the formations in Sedona, then down into the Grand Canyon when it was still legal to land there. Next, they flew to Marble Canyon, all the way to Lake Powell. The views were spectacular and, for Mell, it cemented a direction for his art.

“Needless to say, there were moments of terror and bliss,” says Mell. “I was viewing the scenery with so much adrenaline running through. I was very fortunate. A lot of those things you can’t do anymore in a helicopter. There was such a degree of excitement that, when I returned, I tried to tap into that in some way.”

The excitement and drama in Mell’s work has attracted a slew of avid collectors across the United States and around the world.

His pieces often begin as a series of miniature paintings. From those, he may create several canvas studies, combining elements that he likes from the smaller pieces to become an average-sized painting. Sometimes collectors ask for larger pieces.
He just completed a 40-inch by 80-inch painting depicting a monsoonal downpour across a landscape of red rock monuments. A small run of about one lithograph per year is issued with a master lithographer out of Texas. The colors and the feel of the original shine through.

Beyond the breathtaking landscapes, Mell is also known for his depictions of flowers — often cactus blooms, figurative studies of people and animals, and bronze sculptures, which he began creating in 1985. His sculptures feature the same angular elements as his paintings and are similarly full of movement, with palpable energy.

Two of his sculptures that can be viewed locally are “Jack Knife,” derived from one of his paintings, which sits at the center of Old Town Scottsdale’s Main Street Arts District, and “Rising Phoenix,” which occupies Cesar Chavez Plaza outside Phoenix’s old City Hall. A large copy was also gifted to Phoenix’s sister city, Hermosillo, Mexico.

A new thrill was seeing his art come alive on stage as the backdrop for the world premiere of composer Craig Bohmler’s “Riders of the Purple Sage” by Arizona Opera. The project was the first of its kind, and Mell completed the series of paintings that were used as guides for set designers.

The scenery in the adaption of Zane Grey’s novel went from diorama to massive set, with a background LED screen and 28-foot-high foreground pieces of Surprise Canyon in a scene that slid on and off set via massive cables. A documentary about the process is forthcoming and there are plans for the wildly successful show to travel to other venues in the future.

“The set designers are real pros,” says Mell. “It was a very fun and satisfying and experience. I’ve never been involved in a standing ovation before, but they called me out on stage to join them for the curtain call.”

It was a new experience, but certainly won’t be the last. For his part, Mell continues to paint, sculpt, enjoy road trips, classic car shows, and time with family — doing what he loves in the place he’s (almost) always lived: Phoenix.