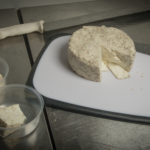 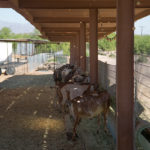 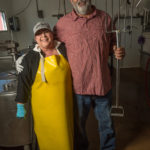 In an area rimmed by the Gila River and Estrella Mountains and surrounded by small family farms and ranches, Crow’s Dairy sits on five acres in southern Buckeye. Along with the Crow family and a robust variety of chickens, turkeys, peacocks, and farm dogs, approximately 350 long-eared Nubian dairy goats call this special place home. A staff of seven helps keep the operation running smoothly.

Both Rhonda and Wendell Crow grew up in Arizona dairy farm families and were well-versed in the production of cows’ milk, but after three generations, they made the switch to goats in 2008 and have been growing their business consistently ever since. They chose the Nubian breed for its sweet, high-fat content milk, but a lot of research has gone into the choices they’ve made.

“In 2006, we sold our cows and took a two-year ‘cheese vacation,’” says Wendell. “We traveled to the east and west coasts and made appointments at dairies and cheese plants. I wasn’t interested in goats’ milk cheese at first because I’d had several experiences with bad-tasting cheese and milk, but my wife wanted to milk goats for a long time. We came across a couple of goat farms that I really liked, and that made all the difference.

“Goats are smaller and they’re a lot easier on you when you’re old,” he adds with a smile.

Small though the goats may be, there’s still a lot of hard work and dedication that goes into each curd, and it has paid off in recognition by Arizona’s top chefs.

Crow’s Dairy cheese first caught the taste buds of Chef Chris Bianco of Pizzeria Bianco fame, and word quickly spread from there. Wendell says he directly provides product to over 70 restaurants in the Phoenix and Scottsdale area, with distributors serving dozens more in farther-flung regions like Sedona, Tucson and even Denver. Whole Foods often carries half gallons of his rich, vat-pasteurized goats’ milk, usually in summer when milk output is at its highest.

“It’s like drinking a meal,” says Wendell. “Growing up on a dairy farm, I never thought anything could beat the taste of cows’ milk, but goats’ milk is absolutely delicious.”

Chefs at top restaurants and resorts clamor for Crow’s Dairy products, snapping them up as fast as they’re made. The range of products includes chèvre (natural, peppercorn, or butter pecan), Feta (natural or peppercorn), cheese curds, and quark, a German-style, strained, fresh cheese similar to thick yogurt made with a buttermilk culture. The freshness keeps them coming back, as Chèvre is often just two hours from farm to table.

Winter is the busiest time on the farm. Summer is another matter, as snowbirds fly north and the market shrinks a bit.

“I love snowbirds,” says Wendell. “I don’t mind the traffic at all. I joke that they feed on cheese! But once it hits 100, they head back. I like to hear about late season snow storms in the rest of the country, because then they stay longer.”

Crow’s Dairy chèvre is buttery and smooth, with a slight tang. The taste is miles ahead of any similar product found on standard grocery store shelves. Much of the secret lies in how the goats are raised and how their milk is processed — with great care. Every goat has a name and each is closely monitored for health and well-being. The herd happily reproduces at a good clip, with four sets of quadruplets so far this season. While other farms remove kids from their mothers almost immediately, Crow’s kids stay with their mothers until weaning.

“We’ve found our kids do so much better when they can be with their moms,” Wendell says.

After weaning, the animals are fed unlimited non-GMO alfalfa hay and grain, and aren’t treated with growth hormones or prophylactic antibiotics. Bucks are kept separate from does, except during breeding (Wendell says the presence of bucks can give the milk and cheese a seriously unpleasant funk). Indeed, the goats on the farm are friendly and curious, playful and well-fed. They don’t hesitate to file into the small milking barn, complete with a disco ball and a vintage sign from Rhonda’s favorite (but now closed) Tolleson Tamale Shop — a birthday gift from Wendell. Every goat is milked twice daily and produces about a gallon of milk. Each gallon of milk produces two pounds of cheese.

The cheese-making process is equally careful. Preserving the delicate cellular structure of the cheese is crucial to a high quality end product. Small vats gently circulate and then pasteurize the milk at the lowest possible temperature. For chèvre, cheese-maker and jack-of-all-trades around the farm, Michael Elizondo, adds powdered culture imported from France. After it ripens, plant-based rennet is added, and the resulting curd is scooped into linen bags and hung on hooks to drain the whey. Nothing is wasted, as a local hog farmer uses the whey to feed her animals. After about 16 hours, the end result is packed into tubs and arranged on shelves in the dairy’s large, chilly walk-in refrigerator, which Wendell says is his favorite thing he’s built in Arizona. Then, it’s ready to be shipped to hungry diners around the state and beyond.

“I can make all kinds of different cheeses using the same cultures and the same rennet, just with different times, amounts and temperatures,” says Wendell.

“We joke that we are the only non-award-winning cheese,” says Wendell. “We’ve never entered a contest. We are rewarded by orders from our customers.”

In the future, Wendell hopes to convert his little-used freezer to a cheese cave and plans to start producing aged goat cheeses, particularly to keep business going through the slower summer season.

Whatever he and Rhonda do, there is sure to be a market for it, as the small but mighty Crow’s Dairy brand has earned the respect of top chefs and customers at farmers’ markets, including Tempe Farmers Market and Uptown Market, and high-end specialty shops, including Brix Wine in Scottsdale, French Grocery, and Duck and Decanter in Phoenix. The popularity of this rare breed of small-batch artisan creations is gaining notoriety far and wide.