Female Pickleball player is returning a serve on an outdoor court.

Pickleball a big dill in Anthem 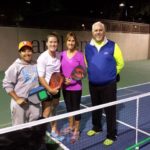 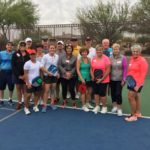 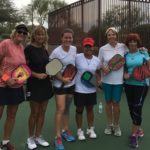 MTake, for example, one of the security guards at Anthem Country Club. He’s heard of pickleball.

“Yeah,” he says, with wavering confidence. “That’s where they hit the ball against a wall, right?”

Inside the club gift shop, a fit, slightly younger fellow provides directions to the Persimmon tennis court. He has not only heard of pickleball – he has played it and even has a ball machine for home practice. But wait, what was a young guy like him doing playing a sport known for the silver-haired set?
“When you’re growing up in Wisconsin,” he says with a grin, “you have to figure out indoor stuff to do in the winter.”

Following the young pickleball veteran’s directions, it’s easy to find the tennis court. People regularly take advantage of said court for tennis lessons. But not today. Only today, as happens every day for a few hours, it’s not a tennis court. Rather than two people volleying tennis balls on one court, and maybe a mixed doubles foursome playing on the second one, there are 16 men and women whacking balls around. The two tennis courts have been made into four pickleball courts, with a constant “thunk” or “thonk” as the hollow plastic balls are sent flying back and forth.

On this afternoon, there are a couple of middle-aged players mixed in, though the majority of pickleballers are retirees.

“It’s fun,” says one regular who was recently hooked. “Easy to play.”

The pace of the games is fast but friendly, with comments of “nice shot” and “good one” mixed in with grunts and groans. While some play to win, most are here to get in a workout with peers.

“I say it’s like ping pong on a tennis court,” says one new player.

“I love the sport,” says Cassie Caton, who recently moved to Anthem. She heard about this pickleball thing, started playing, and discovered it was a great way to mix exercise and socializing. As a result, she has gone from pickleball plebe to pickleball proselytizer.

“You want to share the sport,” she says with a wide grin, “and spread the sport.”

On a rainy day in Washington state in 1965, a few parents invented pickleball to give their bored kids something to do, using pickleball paddles, a whiffle ball and a badminton net.

How did the sport get its goofy name? There are two views on the matter. One of the founding parents says she started calling the game pickleball because “the combination of different sports reminded me of the pickle boat in a crew, where oarsmen were chosen from the leftovers of other boats,” while another insists the sport was named after a dog named Pickles.

After serving as a casual, underground sport for decades, in recent years pickleball popularity has spiked dramatically. Some people take it very seriously, even to the professional level: the first U.S. Open Pickleball Championship was held this year in Naples, Florida (unofficial pickleball headquarters). In the U.S., there are now an estimated 2 million pickleball players, and that number could quadruple in two years, according to the American Sports Builders Association. The group notes a 385 percent increase in places to play pickleball since 2010. Pickleball is on the rise, with a local group following a national trend.

The Anthem Arizona Pickleball Club (AAZPC) has hit triple digits, with 130 members. Some are good enough to play in tournaments around Arizona. Though some play year-round, quite a few snowbirds are in the group, so play heats up this time of year. As they like to say around the pickle courts, “It’s not just for geezers anymore!” Indeed, pickleball is becoming a cross-generational family affair.

“The demographic is going down very fast,” says Gretchen Bender, a club member.

The cost to join is $20, and Barb Patterson, vice president of the club, says AAZPC welcomes all skill levels, including beginners. Though not necessary, it helps if you’ve played tennis before.

“I played tennis,” says Patterson, “but have a bad knee so cannot maneuver an entire court. But I can play pickleball – nearly every day!”

“It’s easy to get someone on the court and playing in under an hour,” adds Caton.

For the last few years, pickleball in Anthem has bounced back and forth between the country club and the community center hockey court. A few leaders of the Anthem pickleballers are hoping to have dedicated, regulation pickleball courts.

“That’s our greatest dream,” says Bender, with a glint in her eye. “If we have designated courts, we can have sanctioned tournaments.”

And, for the casual players, it would mean more opportunities to break a sweat and make friends.

“Playing for an hour is plenty of aerobic activity,” notes Caton. With that, she puts her paddle in its protective sleeve and says she is headed home. But then another player calls her over to fill a slot.

“Oh, all right,” she says, taking the paddle out.

“It’s tough to stop playing,” Bender says, with a chuckle.

Pickleball is perfect for mixed doubles play, with men and women side by side or across the court from one another. A couple more games end around the same time, and players come over to the seats to regroup.

“That’s it for me,” says one man, draping a towel over his perspiring head.

“C’mon,” another player encourages him. “We need you – one more?”

“All right,” the man replies, tossing the towel to his feet and getting up with a slight groan. “Just one more.”