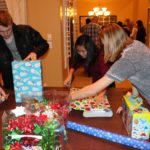 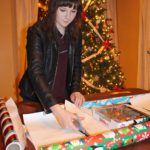 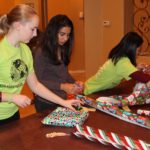 What could be better than giving a toy to a child in need and seeing that little boy or girl’s face light up? How about giving a toy and not seeing the child’s happy face?

This is the story behind an “Anthem Toy Story,” a tale of holiday generosity that seemed straightforward enough, until it took a Samuel Beckett-style twist.

It all started on a brutally hot day in August, when Nicole Sherwood — who Images Arizona recently covered after she was named to the Governor’s Youth Commission — applied a Joy Maker Ambassador through generationOn, the youth division of Points of Light, and the Hasbro, Inc toy company. By early September, the 16-year- old Anthem Prep student learned she was selected, and would be receiving more than 100 Hasbro toys to distribute to local foster children as part of generationOn’s Joy Maker Challenge, which encourages kids and teens to spread joy to others through volunteering.

Nicole set the stage by connecting with Kelley Camasto from the Anthem Foster Adoption Connection, who said her group would love to receive and help distribute the toys. By Thanksgiving week, Nicole had everything set up, and was just waiting for the toys.

“They should be arriving any day,” she was told. Nicole gave a presentation at the Governor’s Youth Commission’s quarterly meeting, which sparked other youth commissioners from across the state to start toy drives for foster kids.

A month before Christmas, Nicole was still waiting for her Godot — the toys. A week later, on December 2, she found out they were lost in transit. More were to be shipped, but would they arrive in time?

After a few agonizing delays (“Waiting for Toys”) due to shipping problems, the toys arrived at 9 p.m. on December 9.

The next day, 30 volunteers hit the Sherwood home in Anthem to wrap, wrap and wrap some more. A few days later, more volunteers delivered the wrapped toys to Anthem Foster Adoption Connection.

Sarah Fanslau of generationOn’s New York office was impressed by Nicole’s work. “She and her team at Anthem Preparatory Academy worked tirelessly on their service project, which brought joy to so many children during this special time of year. Her project is a great example of what generationOn and Hasbro work to do through the Joy Maker Challenge and all year long, help youth realize their power and potentially to change the world.”

The main thing, for Nicole, was helping some kids “know they’re in a community that loves them.”

And so, Nicole and her fellow Anthem area volunteers never got to see the eager smiles and hear the shrieks as kids opened their toys. But no worries, as the “Anthem Toy Story” had a happy ending, and probably will have sequels for years to come.

Along the same line, this season the Daisy Mountain Veterans started a toy drive — the organization’s first. Through a toy store, the veterans provided toys for more than 70 families in need.

“This is our first year,” says organization member Mary Ann Derryberry, “and I’m sure next year will be even better.”

So it is that traditions of giving begin.