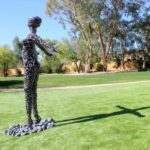 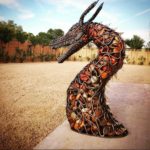 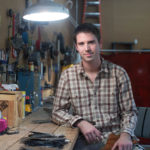 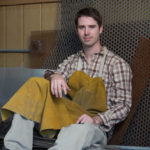 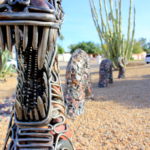 The best way to describe Ryan McCallister as an artist? “I’m brand-spanking new,” he says, “but I know I’m talented enough to show everyone my work and be proud of it.” Even though Ryan received his Bachelor of Fine Arts in sculpture from the University of Tampa in 2010, he’s just now working his way onto the sculpture scene. After college, he took a break for a bit, working odd jobs. He started McCallister Sculpture a few years ago in New Jersey, working in his basement.

But because of limited resources and space, Ryan felt his art wasn’t flourishing in Jersey City.

“The stuff I wanted to do was too big,” Ryan says. “People [in Jersey] didn’t have space to put my stuff in their yards. Everything had to be tiny!”
Ryan can do tiny (half of what he creates are table-sized), but he also wanted the option of making things big and bold. His larger, more recent sculptures are around 5 to 6 feet long, 3 to 4 feet wide, and 4 feet tall.

“I thought moving west would be great because everyone has space, plus the type of metal work I do would sell better,” Ryan says.

As for how he ended up living and working in North Scottsdale? It all just “sort of happened,” he says. Ryan lived in Arizona when he was a child and remembered it fondly. When his parents retired, he came to visit them in the “stunning weather time” and was blown away.

“You’re telling me I can work outside?!” he says. He made the move.

Ryan worked briefly with the Cosanti Foundation in Paradise Valley and discovered he loved foundry work. He then converted a two-car garage into a one-man shop and has been working there for the past year. His main focus at this point is building enough inventory to start a gallery. He’s also just trying to meet other local artists, as he still feels rather new to the Phoenix art scene.

“One of the biggest challenges has been networking,” he says. With a new baby and a recent divorce, he hasn’t felt like he’s been able to immerse himself fully in Phoenix or its art scene.

“I’m deep in a routine groove,” he tells me.

“I draw inspiration from things that interest me – like horror movies,” he says. “I like things that scare you.”

But he also realizes he has to make compromises for his audiences: “I know a horse will sell better than a minotaur. I’ll do something that I want, like a dragon, and then do something that will appeal to a wide range of people, like a moose. You have to have income, so you compromise in a lot of places.”

His sculptures might start with a chalk drawing, or at least a step-by-step process in his head. He works mostly with steel, both scrap and pristine, welding with a torch and protects himself with a fireproof welding jacket. For the table-sized pieces, work can be tedious. Sometimes it takes him two weeks to complete. For the larger pieces? Usually a month each. Of course, making bigger pieces means more work. This is why it takes so much longer. Welding includes a number of different processes, some of which require acetylene and oxygen gases. These gases need to be stored appropriately, so it’s important that people consider reading some advice on storing acetylene in their workplace to prevent any accidents. As Ryan creates a lot of different welded pieces, he needs these gases available to him at most times, so it’s important that he keeps them stored away carefully.

“I’m becoming more efficient,” he says. “What once took a month only takes three weeks. It’s exciting to tackle!” His prediction for next year? Fifteen to 20 pieces.

His genre is difficult to pin down.

I always ask artists why they picked the medium they did. Ryan simply says, “I lacked talent in other areas. I loved drawing and painting, and I was OK at it. But everyone else around me [in college] was excelling! They were so good, I thought, ‘I don’t want to compete with this!'”

But he found his niche in the ceramics department, where he discovered bronze casting.

“It’s one of the coolest forms of art just because the process is amazing,” Ryan says. “You can achieve lifelike realism!”

He started working with bronze, welding and using an oxy-acetylene torch but has since changed to a more precise MIG welder. He decided to change his equipment after seeing the Best MIG Welder Under $1000 Dollars Guide and Review as it showed him all the advantages of this type of welder. It allowed him to work on more complex pieces of art and didn’t break the bank.

“I thought, ‘This is something I don’t see often – I can push the limits!'”

It’s true Ryan’s work is something you don’t see often. And that’s a good thing.

“My favorite part [about being an artist] is when people look at my art and they’re stunned,” he says. “That makes me really happy.”

It’s the kind of motivation he loves, and the sooner he can get his work viewed in person, the better. Pictures are great, he says, and they can make the sculpture look good, but you really need to see it in person to appreciate the amount of time put in.

“I want to make people happy with my art,” he says. “The biggest reward is all the support!” Ryan references a video of his “Swimming Dragon” sculpture, the first large sculpture he made. He posted it on social media and it went viral, garnering more than 30,000 likes and shares.

To view his art, purchase a piece or order a commission, head to his Facebook page or website. He’s not limited to sculpture; he also does metalwork for private residences. Another major goal is to get his work in public places like parks. He’s hoping for a public commission in the future.

“I’m at that stage right before I can actually bloom and promote everything,” Ryan says. He’s not in any shows or galleries because he’s got to build his inventory and portfolio first, but he feels like he’s finally coming into his own.

“I just now have enough stuff to start rotating things in galleries. I’m excited for the future, but so far it’s just been keep your head down and work hard.”

If you’re looking for an up-and-coming artist, take note. Ryan McCallister is worth your time.