Handcrafted flute in the hands of the flute maker

A Tribute to the Native American Flute 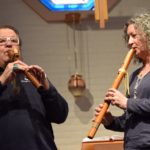 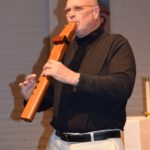 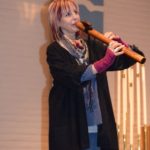 Christ the Lord Lutheran Church (CTL) proudly presents an extraordinary concert by the Desert Foothills Native American Flute Circle (DFNAFC) during CTL’s Patron Appreciation Event. CTL created this special event in honor of the great generosity of the donors who support the Living Music Performance Series. The unique concert will take place on February 18 at 4 p.m.

With the soothing sounds created by experienced flute players, audience members will find healing and comfort in the melodies and rhythms that beautifully flow from this ancient instrument.

“The Native American flute is believed to help restore balance both within our bodies and with our physical environment,” explains Dr. Ron Bonnstetter, a member of the DFNAFC and master of ceremony for the concert. “My own research in cognitive neurology supports the findings that the Native American flute, especially the lower-pitched flutes, create a meditative state by increasing slow brain activity and decreasing higher bandwidths, such as beta activity. The Native American flute shows promise as a music therapy for post-traumatic stress disorder, asthma, chronic obstructive pulmonary disease, anxiety, hypertension and different forms of depression.”

For those needing restoration, the collective sounds of the flute weaved together create a healing atmosphere. This concert will not just renew the soul; it will transport concert-goers back in time.

The Patron Appreciation Event features the exceptional sounds of old world flutes performed by accomplished French flutist Sylvie Berthod. Berthod, a professor of musicology at Sorbonne University in Paris who specializes in early medieval and Renaissance European flutes, will amaze guests with performance pieces from those early periods.

“This is a once-in-a-lifetime opportunity,” says Bonnstetter, “to compare and contrast old and new world ancient flutes and their timeless music.”

The DFNAFC rehearses monthly at CTL; however, the Patron Appreciation Event will be their premiere performance in the Living Music Performance Series. CTL gladly supports the DFNAFC and their steadfast work in bringing traditional and contemporary Native American flute music to the community.

“The arts, especially music, can unite people by creating common bonds,” Bonnstetter says. “The soothing sounds from these flutes made of wood is a magical experience that represents an opportunity to connect with those ancient desert dwellers who walked this land before us.”

CTL encourages the public to attend this free musical event, not only to hear masterful flute playing but also to applaud the many donors who continuously support CTL’s mission to bring exquisite music to the Valley. Those desiring to contribute to the Living Music Performance Series will have an opportunity through a voluntary offering at the event. Additionally, the Patron Appreciation Event will be dedicated to R. Carlos Nakai, recognized as the world’s leading Native American flutist.