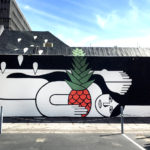 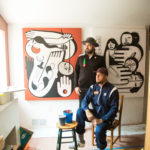 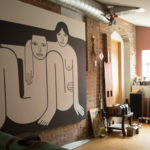 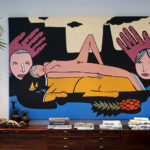 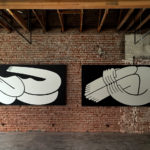 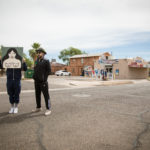 Gabriel and Isaac Fortoul grew up just across the Hudson River from bustling New York City, in densely populated Union City, New Jersey. The brothers’ Colombian-born parents, creative talents in their own right, encouraged their sons’ pursuit of the arts, which range from painting to sculpture, film to fashion. The result is their work under the name 40Owls, an artistic entity that is ever-changing.

Blending indigenous themes and pop art, with bold lines and, the Fortouls have developed a style all their own that has garnered international attention. They’ve capitalized upon it with savvy social media engagement, enabling them to develop their broad range of interests and a loyal following that is eager to know what the next iteration will be. While they’ve paid careful attention to every detail of what they put forth, there’s nothing about it that feels calculated. Their work and their partnership have evolved organically.

I met Gabriel at a bungalow in Phoenix’s historic Garfield District that’s half studio, half residence. Isaac was traveling through Colombia at the time of our interview, reconnecting with relatives and also assessing the possibility of the duo creating art there in the near future. The front room of the home is in a state of deconstruction, having served as a do-it-yourself pop-up gallery in the past and now acting as a workspace. With a family background in construction and architectural design, breaking down a project and starting from scratch is in their blood. The walls of the home’s residential side are covered with several of the large canvases they’re known for, along with smaller pieces and several sculptures. It’s a place the brothers have used, off and on, as a home base for nearly 10 years, leaving and returning as their vision for the next step in their collective career has evolved … a mix of completion and possibility.

“We always knew, even as children, that we were going to work as creatives,” says Gabriel. “We were always so close and did everything together. Our parents were very supportive of us living a life outside of traditional platforms. They encouraged us to try different things and not to settle for something easy.”

Early on, the brothers pursued seemingly incongruous paths. Isaac attended art school in Philadelphia for graphic design and worked as an artist. Gabriel, who is three years older, was a stockbroker on Wall Street. No doubt in his time he became quite used to seeing the Square shares fluctuating, amongst others. It was a vibrant job in its own right. But when the tragedy of September 11, 2001 hit, quite literally, close to home, it prompted reflection – and a very big move.

“I think there are always major signs in life, and you can choose to ignore them or really take them for what they are,” says Gabriel. “It wasn’t the end of the world, but if it had been the end of this physical manifestation we have now, why waste time? It was our sign to do something else. We wanted to go somewhere that we didn’t have familiarity or comforts. It could have been anywhere.”

“Anywhere” turned out to be Phoenix, a place they’d never been. They purchased one-way tickets and traveled around a bit, appreciating a new kind of beauty.

“Most people think of the desert as a barren sort of wasteland where nothing can thrive or exist,” says Gabriel, “but as you come to understand it and recognize it, you see that it’s abundant in life-forms and these life-forms are very resilient. They can make it through almost anything. They survive on the bare minimum and they’re beautiful. That resiliency is something that we see in ourselves.”

Gabriel describes their attraction to the raw energy of the area, which they settled upon after Isaac had a vision that confirmed their future was downtown. This connection to magic and the spiritual plane is a thread that runs through their story and their work. The Phoenix arts community was free of significant interference or interruption, with a rules-don’t-apply, Wild West mentality that spoke freedom to the brothers. It was – and is – a young city on the cusp, where there is ample opportunity to become a trendsetter, without the limitations of other, more established cities.

“We saw a possibility to have a career in the arts and do it independently, outside the gallery system,” says Gabriel. “We knew we wanted to create this cultural entity. We were really fresh and green at the time and didn’t know how any of this operated, but we wanted to create. It was pure passion and excitement.”

By 2004, they had made a name for themselves in the Phoenix art scene, and were known for hosting decidedly un-stuffy art affairs in the form of after-hours lounges. Gabriel smiles and admits the gatherings walked a fine line between party and exhibition, but art remained central to the mix of music, fashion, film, dancing and self-expression. All of it was fueled by the brothers’ desire for an interaction of the minds – meeting and socializing with a broad range of people in the way that came naturally back in New Jersey. They rented a home next to a gallery and did all their own set up and promotion, building their website and hand drawing mini fliers that stood out from the standard, polished gallery postcards. People began collecting them.

“Looking at it now, we were setting the framework for what we’re doing now on a more professional level,” says Gabriel. “After a few years, we decided to go back to New York City as artists with a different set of eyes, taking the momentum of what we were doing here and sharing it with a major city where people from all different countries could see it.”

They returned to New York in 2007 and, through much determination, networking and social media engagement, landed their first major exhibition at Tribeca’s Dame Dash Gallery in 2010. They went on to connect with the preeminent Latin American museum, El Museo del Barrio, and in 2012, collaborated to promote multiple artists in their own Chelsea gallery under the name 40Owls. They were drawing crowds, accolades and collectors. Then came the familiar itch to do something different. A new chapter began.

“We were searching for the evolution of the artwork, and that’s when our current style began,” says Gabriel. “We manifested these visuals at the same time and started working together on pieces. We needed to set aside working with other artists and just focus on the two of us. We were able to show the Phoenix community what we’d been doing, how we’d progressed.”

They were inspired to create something universal, using bold lines and shedding symbols for a timeless feeling that draws from ancient influences with a modern twist. It’s a less-is-more approach that has a strong message: the answers, the meaning of life, are found in connection. Earth, nature, fertility, prosperity, family, lunar and solar energies – all these elements are universally recognized by the human race. The hope exemplified in the Fortoul Brothers’ art is that we reconnect with those basics and see the oneness in one another. They don’t choose to present problems in their pieces, because they feel that doing so would add to the negativity in the world. Instead, they seek to present the answers.

“It’s about reconnecting with nature and the earth and with ourselves, more than anything,” says Gabriel. “Once we realize that all the magic is here, all the answers, it’s opening our eyes and recognizing it. I think we need to respect those things.”

The enthusiastic response of collectors to their first exhibition as Fortoul Brothers in November 2014 was a bit unexpected – it confirmed that their base had expanded in their absence and that returning to Phoenix was the right move. With social media, they’re able to work from Phoenix and ship their art to exhibitions anywhere else in the world. They’ve maintained a foothold on the East Coast, completing a series of public art murals in their hometown in the summer of 2014, and had extremely successful exhibitions in Los Angeles and Phoenix this past spring.

They’re always open to the next wind that will blow in a new idea, a new magic. Recently, Gabriel began planting a garden, including a mix of tropical fruits and native plants, inspired by the wisdom of a time when people lived off the land. He also sees a future where fashion, film and working with musicians will all be tied together by visual arts. Then there’s the goal of spending time in Colombia. It’s all about timing, but he knows it’s on the horizon. He says that he has had prior visions of everything that has happened up to now. The ideas are there for what is to come, but the moment has to be right.

The Fortouls have a number of projects currently underway, including a collaboration with Design Within Reach, Scottsdale in November; possible public art installations in Los Angeles; and, in September, they donated their time and talents to create a mural as part of Phoenix Raceway Charities’ renovation of Roanoke House, Phoenix’s first Ronald McDonald House.

“We’re going to have a lot of color, vibrancy and positive imagery, which is prevalent in all the work we do,” says Gabriel. “We’ll do something amazing. At least for a second or a minute to cheer them up and remind them of the magic in life and the great things that are here, to give them strength to get through what they’re currently dealing with.”

The mural is one more way for the Fortoul Brothers to put positivity into the world, perpetuating the best kind of magic through art.

“It’s not about receiving, it’s about ging back,” says Gabriel. “We all do that in different ways. For us, it’s about the artwork and any knowledge people can see from it is our form of magic, our passing of fortune. It’s cyclical and infinite. What you give, you will receive.”