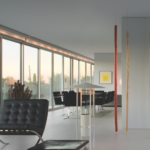 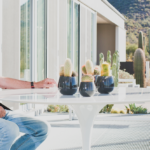 Michael P. Johnson has presence. It’s not the fact that his 6-foot, 4-inch frame makes him tower over most of his friends or his distinct mane of long white hair that makes him stand out in a room; Johnson has a distinctive energy about him that isn’t seen so much as it is felt.

History will probably call Johnson an architect. That nomer isn’t inaccurate. He is, after all, one of the most recognized modernist architects of our time. He runs his architectural firm, Michael P. Johnson Design Studio, out of Cave Creek, and he taught for 28 years at the Frank Lloyd Wright School of Architecture. He is also a professor at the prestigious International Academy of Architecture in Sophia, Bulgaria and at the Democritus University of Thrace School of Architecture in Xanthi, Greece.

In reality, however, Johnson is a philosopher whose expression is through architecture. Whether his language is through words or the building materials he chooses, he weaves a narrative that is rarely, if ever, simplistic. It is just as much about expressing his inner spirit as it is about creating beautiful spaces.

Each thought and element is turned through a tumbler in his mind, honed and polished by his ideals. The ideas that emerge are not particularly mainstream, but then again, neither is Johnson. That’s what makes him brilliant.

“Everybody throws around words,” Johnson says critically, nursing a J&B scotch. “I don’t sugarcoat things. I call a spade a spade.”

He can be brash, and is seldom politically correct. In fact, he tells clients that his only mandate is that they must leave him alone. Still, when they do, what Johnson comes up with is never a disappointment.

Despite his sometimes-disarming candor, Johnson is also emphatically unpretentious and deliberate in all he does. His work reflects a refreshing lack of frivolity, and choices made from sound logic and intuition—something he developed from years of autodidactic study.

To understand Johnson’s work, it’s important to first understand his history. In his own words, “No one comes from nothing or nowhere,” and, “You can’t make history until you know history.”

Johnson was born in 1938. His earliest years were consumed by World War II, which began three years after he was born.

His father, Gilbert, was a loving, devout Catholic man who became the youngest commissioned colonel in the war. When it ended in 1945, he was discharged on disability and the family moved to Wisconsin. Gilbert taught himself metallurgy, which planted the idea in young Michael that there was more to learning than formal education.

Every evening after dinner, Gilbert underlined five stories in the day’s newspaper, handing it to his sons with instructions to read each article. Afterward, he quizzed them on the details. It was this nurturing act of parenting that fostered Johnson’s keen interest in politics, as well as his love for learning.

Early on, Johnson was diagnosed with dyslexia. Instead of letting it limit him, he pledged to read 5,000 books—a feat he accomplished years ago. He read, and continues to read, poetry, theology, mathematics and philosophy—nearly every book he can get his hands on. Each one left pieces of perspective that he has the remarkable ability to summon in casual conversation.

Johnson applies the same type of controlled, logical approach to nearly everything in his life. In his typically candid, unabridged style, he tells me, “Emotion pollutes the intellect. People get emotional about the g-ddamnedest things.”

In 1948, at the age of 10, Johnson built a house with his father and brother. It was his first foray into the industry, and he fell in love. Recognizing his talent and passion, his mother, Lorraine, enrolled him in art and drawing classes.

Life marched on. The 1950s and ’60s brought McCarthyism, the Korean War, the Civil Rights movement, and a flurry of political movements and philosophies. Johnson became an active participant in world events. In particular, he became impassioned about the Chicano Movement in California. During the grape boycott, he met César Chávez and shared his desire to improve living conditions for farm workers.

Also during those years, console television sets were made the focal point of living rooms across the country. Shows like “I Love Lucy,” “Father Knows Best,” “Gunsmoke,” and “The Adventures of Ozzie and Harriet” were creating a national identity, while the increased popularity and reach of commercials resulted in a rise in consumerism that continues today.

There was also a counterculture evolving through literature and music. Authors like Jack Kerouac, Allen Ginsberg, Charles Burkowski and William S. Burroughs built on a Dostoyevskian foundation, challenging what they saw as the façades of society: materialism, militarism and Western religious values. Despite, or possibly because of, their cynical rejection for conformity, their influence grew—particularly in young Michael P. Johnson.

“I’m too old to be a hippie,” Johnson says casually. “I was actually a beatnik.”

It also influenced an architect and fellow philosopher who was a couple of decades Johnson’s senior. Paolo Soleri had moved from Italy to Arizona to study with Frank Lloyd Wright. In the early 1960s, Johnson invited Soleri to lecture at the Milwaukee Arts Center. The two became fast friends, and after years of phone calls and letters, Soleri invited Johnson to Arizona in 1967. Johnson fell in love with the desert.

“I was freezing my ass off in Wisconsin,” Johnson says. He was also burned out on what he felt was architecture becoming a “trash for cash” industry, with function and ethics becoming less important than commercial appeal.

Long before Cave Creek became a boutique town, it was home to horses, hippies and Harleys. Cowboys and bikers lived peacefully alongside long-haired folks in flowy clothes, not because they shared the same beliefs, but because they were all misfits of sorts. Johnson fit right in with the artists and independent people who became his neighbors.

Over time, Johnson developed an appreciation for the work of architects Mies van der Rohe, Ulrich Franzen and Walter Gropius, among others. Like them, Johnson envisioned many of the same uncluttered, simple lines and integration with the environment that Wright advocated, but he grew to prefer the sleek permanence of steel and glass.

“If someone comes to me through a recommendation, I always tell them to go on my website and look at what I do, because that’s what they’re going to get. In other words, if you want an organic building, you’re not going to get it from me,” he said.

Locally, some of the breathtaking homes and buildings he’s conceived include the Ellsworth/Davenport Residence in Cave Creek, the Bradley Residence in Scottsdale, and the Yoder Residence near South Mountain.

Other work has been commissioned across the country, like the Parr Residence in Shelter Island, New York that seems to float over water, and the Hiller Residence in Winter Park, Colorado, cantilevered over a ravine for more of a unity than a dichotomy between structure and nature.

Like all of his work, they carry his unique signature: They are magnificent on the outside—“utter simplicity combined with an almost worshipful treatment of the [environment],” in the words of architectural writer Taz Looman—but like his own personal philosophy influenced by the poets and dreamers of his youth, the real investment of time, money and thought is in the interior.

To Johnson, function beats decoration. Nearly all his spaces are white—including Italian white porcelain floor tile, glass walls and gypsum board, chalk white walls. His only contrast color is black.

Despite monochromatic simplicity, what evolves is far from cold or expressionless. His spaces are surprisingly warm and evocative.

Author Louise Noelle, who wrote a book about Johnson called “Michael P. Johnson: The Unshakeable Search for Architecture,” described his work scrupulously: “… the aspiration was to create an unsentimental, rational, and minimal, yet sensuously elegant residential architecture, that was to promote social equality, optimism, and aesthetically balanced and liberated life.”

“The role of an architect should be looked as a constructor of dwellings, of built environments,” Johnson explained, citing Heidegger’s 1971 essay, “Building, Dwelling, Thinking.”

He outlines five fundamentals that form the foundation of all of his work:

• Structural method and concept are paramount in design development.

• The budget should focus on the interior, not the exterior.

• Architecture is a complex problem in which the site, the program and the structure must fit together in a beautiful way.

“It wasn’t until the late 1800s and early 1900s that architects began to care about the common man,” he adds. “Prior to that, the only things architects cared about were museums, religious buildings and homes for the very wealthy. We are going backward because star architects now only do museums, train stations and airports. They won’t even design a house because the money and glory are not there.”

He pauses for a moment, then continues, “The problem lies in education and knowledge. When I was growing up, we were more culturally aware and more educated. When I graduated from grade school in the 50s, we had about the same education as what I see in high school graduates now.

“In high school back then, part of our art education course was the study of architecture. We studied the theater and the arts, read good books, and we were given a foundation of architecture and the plastic arts. Today’s students don’t have any of the tools they need to make a qualitative decision or to think of things critically.”

For Johnson, it’s also about celebrating culture—something he feels is lacking in current architectural trends. It’s something he’s passionate about, and he harbors unforgiving rancor for an industry that seems to have left it behind.

“Unfortunately, 99% of the buildings built in the U.S. have nothing to do with architecture; they’re just buildings. They’re junk,” he says. “Most architects are merely draftspersons for a cultureless society.”

The same disregard for “selling out” has led to Johnson’s contempt for the so-called green movement. The latest trend for architectural firms and contractors to become LEED certified may have had altruistic roots, but Johnson says that is not the case today.

“I believe very much in energy efficiency, but I criticize when the industry uses it as a marketing strategy,” he said.

It is within these principles that Johnson continues to create, and to lecture worldwide to budding architectural hopefuls—something he says he will continue to do.

“Many of us come to a place where we either become complacent or satisfied with where we are,” he says. “Not me.

That’s because, for Johnson, there is still plenty to accomplish.

Like the late Alfred Newman Beadle IV, whose desert modernism is now part of architectural vernacular, once said, “If visual pollution were toxic, we’d all be dead now.” Johnson has taken that mantra and turned it into his own version.

“If visual pollution was criminal, 95 percent of architects would be in jail,” he says sourly, his J&B drained.

The irony is that, through Johnson’s works of modern function and form, he is not trying to create something new so much as he is attempting to preserve something that once was. And so he will continue, expressing not only his skill, but also his own bohemian credo, in dwellings that inspire the rest of us to want to listen.

The Constructions of Michael P. Johnson