Kilbane Architecture All in the Family 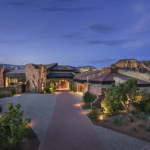 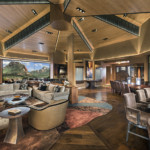 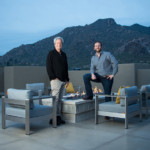 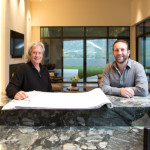 For Terry and Justin Kilbane of Kilbane Architecture in Carefree, designing grand, nationally-acclaimed homes is all in the family. But the intensely personal way in which they work manifests itself in the eminently livable homes – and friendships – they’ve built with their clients. Their clean, modern architectural style aligns with the spectacular environments in which they’re situated and has been met with great success, rooted in a love of residential architecture and the allure of the desert. When they’re designing these homes, it’s vital to think of the value that some features can add. For example, a nice composite decking area can make all the difference to a garden. By adding one of these, homes can increase in value due to the extra entertaining space that the home now has. The more space that comes with a home, the more it is normally worth. When designing homes, it’s important to think about the practicality of the space and the value it might add in the future. I have heard that Custom Home Builders Sydney are particularly great at understanding the practicality of the space they have to work with. Looking at their work could be a good reference point in the future.

A native of Colorado, Terry came to Phoenix in 1981 and established Terry Kilbane Architecture. When Justin joined him 20 years later, the name was changed to reflect the partnership.

“I always had dreams of the Southwest and the freedom of the architecture,” says Terry. “When I arrived here in the ’80s, I found an environment full of work during the boom years, and I was drawn to nothing but custom homes from the very start.”

As a licensed architect for 36 years, Terry finds a great deal of satisfaction in the balance between professionalism and fun, precision and imagination, as he has built a business that depends on close relationships with clients. Sharing this passion with his son and business partner has allowed him to evolve continuously, adding Justin’s design acumen and talent for all things tech.

Justin grew up in Carefree and worked construction jobs every summer, learning the ins and outs of the trade. While he was always around his dad’s business, he didn’t start out with his sights set on a career in architecture. All that changed when a friend encouraged him to take an introduction to architecture class at Arizona State University. After eight years of study, internship, rigorous exams and on-the-job training at his dad’s firm, Justin earned his architecture license, making him a partner in the firm. He’s grateful for the experience of participating in every aspect of the business from the very beginning.

“Traditionally, architecture students don’t get to have any design input for many years,” says Justin. “I’ve done every job that anyone starting out has had to do – approvals, city work, dealing with red tape – but I was also able to sit in meetings and take part in the design process right away. Every year, I was able to take on more of the overall architectural process. Dad enjoys being more big picture. He is the best at site design and architectural layout, and he gave me the freedom to design the interior space plan and functions, along with many design intricacies like front doors, furniture, etc.”

The Kilbanes are firm believers that architects should build their own homes, experiencing the same processes, ups and downs that their clients do, and both have done so (more than once) in the Carefree and Desert Mountain area. They’ve had a hand in many of the surrounding communities, often acting as standard-bearers. The firm is responsible for designing the first homes in Desert Mountain and the Mirabel and Estancia golf communities. Their intentional process all begins with location, location, location.

“The location and the site will always dictate to us a true custom home in both the floor plan and site plan,” says Terry. “The exterior style is where the client comes in. We design homes from the inside out because we’re always working with a one-of-a-kind piece of land.”

Theirs is not a volume business, however. The two pride themselves on taking their time to produce the highest quality possible. Each home takes an average of two to three years from concept to completion, with 70-80 sheets of detailed drawings for each project. This total focus on their clients establishes a high level of connection and comfort as they walk their clients through every aspect of the journey. Because of this personalized approach, the pair only takes on two or three projects per year.

“We really are a full-service firm,” says Terry. “They come to us for the design talent, but our technical support and involvement during construction is as good as it gets. We’re with them up until they move in and afterward. We watch their kids grow up; we golf with them, and some stay in our homes when they’re in town to check on their home’s progress. It’s a continuing relationship.”

The downside? Repeat business is a rarity. Upon completion of their ultimate dream homes, clients happily settle in and never want to leave. Though they don’t advertise, word of mouth ensures that the Kilbanes are sought out by clients from far beyond the Phoenix/Scottsdale area. They’ve completed homes in Colorado, Hawaii, Idaho and California, and they’re in demand to design Arizona winter havens for out-of-town clients, primarily from Canada, the Pacific Northwest and the Upper Midwest.

While it’s difficult for Terry and Justin to choose favorites, three projects stand out.

Sedona Desert Lodge at Seven Canyons
“In recent years, there’s no question that one of our standout projects is the desert lodge style we built atop Rachel’s Knoll, which is a very spiritual place,” says Terry. “Our focus was on creating a home of unprecedented design quality, but with total respect for its environment that would blend with its surroundings. It’s one of the most beautiful settings in the entire country.”

The home’s exterior mimics the geology around it, with sandstone walls snd black zinc fascias and trim. After using the best roofing companies in Aurora Colorado, they knew they wanted a great roof on this home too. The roof is a red clay roof, which is not only aesthetically pleasing but sustainable too. The home is terraced on all sides with a spectacular, 72-foot pool that is cantilevered over the bluff. The views from the home, pool and three large hot tubs are positively otherworldly. Twenty-six steps lead from the home to the pool and mirrored alongside them runs a stepped waterfall built over the course of six months by a local artisan.

In addition to the terrain demands of the property, Terry and Justin were also tasked with creating a livable environment in a large home often used for hosting multiple guests, in a way that would easily function, given the extensive technological system needs for both security and utilities. The home is remarkable from both the standpoint of what is visible and what goes unseen, but is essential for the day-to-day. Breathtaking doesn’t begin to describe it.

Silverleaf Family Retreat
This desert traditional home with stone exterior, ironwork and a Spanish clay roof, spans the length of one-and-a-half football fields. Every detail was painstakingly considered to accommodate extended family and friends, and reflect what the owners hold dear. An old family barn was repurposed for all the walls, ceilings and posts in a stunning, one-of-a-kind space. Since they enjoy yearly trips to Alaska, an Alaska room was built to evoke the feel of an Alaskan fishing lodge, including its own kitchen with brightly-colored, 1950s-style appliances. Guest houses and a recreation building with gym, fitness center, simulator room, movie theater and climbing wall have their own entrances.

“They took every element of the home very personally,” says Terry. “You might think that people who build these homes, who are often CEOs of multimillion dollar companies, would be too busy to pay close attention to the project, but it’s great how they really involve themselves. When the drawings are final, they know their homes as well as we do.”

Telluride Lodge
Situated on eight acres at the edge of a national forest and the base of majestic Mount Wilson, the Kilbanes’ mountain architecture is a modern family home with a nod to the past.

“The logs were split by hand and then mortared in varying directions,” says Terry. “We used stone and copper elements, and many different sloping rooflines. There’s a lot of movement in the design.”

The entry portico, which is supported by massive tree trunks, was Terry’s inspiration. He wanted to create the feel of walking through the forest to reach the front door. Four large trees from his brother’s ranch were carefully selected, cut, peeled and then set into the entry to dramatic effect. Also dramatic was the effort it took to transport equipment and install utilities at a site that is 20 miles from the nearest town. The five-year project is another example of the Kilbanes’ talent for taking on a challenge and creating homes that look like they’re meant to be in their surroundings.

As building styles and technologies change, one of the top trends that Terry and Justin have mastered and elevated is the exterior cantina, a covered, outdoor great room that functions as a true living room for all seasons. Retractable glass and in-floor heat play a part in combatting the elements, but the rooms otherwise feel like outdoor living can go on year-round. Justin built one of the largest cantinas to date for his family, and uses it more than his home’s interior.

“Homeowners love these rooms,” says Justin. “We seem not to be able to make them big enough. They’re often 1,500 square feet or more and are outfitted with big screen TVs, barbecue grills, fireplaces and full kitchens. The same furniture that you’d use indoors can be used because the area is completely sheltered. We take them to the nth degree and they become the place everyone wants to spend their time.”

While they have traditionally done large, complex projects, the pair is just as happy with the trend toward smaller, under 5,000-square-foot homes. Large or small, the personalized, client-focused process is the same, and they enjoy working with a treasure trove of artisans, true craftsmen of many trades and interior designers (including Justin’s wife, Kendra).

“We have been blessed with wonderful clients who put all of their trust in us,” says Terry. “They give us freedom to create because of what they’ve seen us do. So, we get to help these wonderful clients build the dream home of a lifetime. We love the type of clients we attract.”