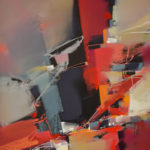 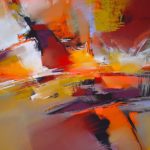 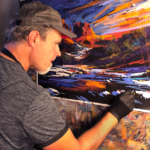 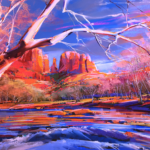 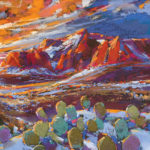 When Michael McKee is painting, he is in the moment. Much like a jazz musician who improvises while playing a song, McKee relies on his intuition to guide him with every stroke of pigment as he creates colorful, bold, contemporary pastel abstract and landscape paintings.

Coordinated by the non-profit Sonoran Arts League, the free, self-guided tour takes place the last two weekends of November and offers patrons a unique chance to meet the artists and see them demonstrate their techniques.

“The artist directory has become quite a collectible, and there’s much anticipation each year among artists and patrons alike as to who will be the featured artist,” said HITH marketing chair Carole Perry, a glass artist who has opened her studio to patrons for all 22 years of the tour.

In May, more than 120 pieces of art were submitted for consideration for the cover.

“There were many strong entries this year, but Michael’s painting took our breath away,” Perry said. “His use of color is both calming and powerful. Whether he’s painting a jagged desert hill, a sunset or an abstract expressionist piece, his work stirs emotions and has a lasting effect on many people.”

Drawn to the Desert

A Cleveland, Ohio native, McKee spent many years working as a portrait artist, illustrator, graphic designer and creative director. A trip to Chimayo, NM in 1997 was life-changing, as he was immediately drawn to the range and density of color found in the texture of the high desert landscape. While witnessing a stunning sunset with his wife, Cassandra, he ran his fingers through the earth and realized it felt like soft pastels. Upon his return home, he began experimenting with pastels, creating landscapes and abstract expressionisms with fresh, bold shapes and rich color.

The couple moved from Chicago to Arizona in 2013, where McKee draws much of his inspiration from his desert surroundings and his travels throughout the Southwest.

Relying on His Intuition

“Sedona Snow” was inspired by a trip to the mystical, scenic town in February, when some six inches of fresh snow covered the ground.

“In all of the years I have lived here, I had never painted a landscape with snow,” McKee, a Fountain Hills resident, said. “I was hiking with a friend north of Sedona in West Fork Canyon, and the snow just soaked up the sound. There was such a beautiful contrast of the cool snow against the red rocks. The juxtaposition of color and texture was unexpected, and I felt compelled to capture that moment.”

McKee works loosely from photos and tries to keep his paintings as intuitive as possible.

Improvisation plays a big role in his work as well. A series of work might include a variety of shapes with cool and warm tones. His abstract compositions are often born from his landscape paintings.

“I might zoom in on a section of one of my landscape paintings and then create an abstract piece that transforms a jagged cliff into a city scene,” he said, adding that he draws inspiration from the architecture of his hometown, Chicago.

He credits his father, Robert “Bob” McKee, a professional jazz musician, for teaching him the art of improvisation.

“I was an introvert, but Dad helped me play the drums professionally,” he said. “Now, I listen to music all the time, and I play my keyboard twice a day during breaks or when I need to relax. There’s a strong parallel between my love of music and my passion for art. Whether I’m creating a song or a painting, I can disappear into it and find pleasure in the ability to concentrate and focus.”

“It was a devastating loss, but I continue to be inspired by his enthusiasm, inquisitive nature and his strong work ethic,” McKee said, adding that he now paints with a photo of his father pinned to his easel.

While McKee travels the country to exhibit his work at more than two dozen shows per year, he is grateful to be a part of such a prestigious event so close to home. This will be his third year exhibiting his work as a guest artist at Carlos Page’s Studio #28. Page, a contemporary metal sculptor, was the 2017 HITH featured artist.

“Carlos is a good friend, and I have so much respect for his work,” McKee said. “Ceramist Myron Whitaker and jeweler Rollande Poirier will also return to his studio this year. We have a great camaraderie, and there’s a hip, creative vibe when we’re together that adds to the fun.”