The Burden of Dreams: Choi+Shine at Canal Convergence 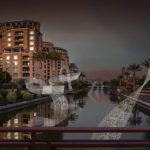 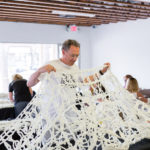 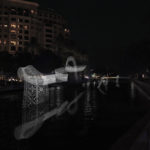 “Our philosophy is to create something that gives a pause from busy life,” says Choi, “to have a moment to gaze at something beautiful and quieting.

“I was always fascinated by crochet. When you think of it, it’s one strand, twisted a certain way with a tool that is really nothing but a stick with a hoop at the end. You twist and turn, twist and turn, and you create something that’s remarkable. It not only becomes a two-dimensional surface, but when you fold it a certain way, it becomes occupiable structure on a large scale.”

Jin Choi and Thomas Shine are the husband and wife duo behind an internationally renowned design studio with works featured around the world, from Singapore’s Marina Bay to Sarjah, United Emirates. While both achieved high level degrees in architecture, the pair’s talents complement each other as Choi’s artistic vision is brought to life by Shine’s expertise in structural architecture. Their collaborations are produced on a massive scale and take months of non-stop work to prepare.

“Making these pieces is somewhat brutal,” Shine says. “I joke that every time [we finish an installation], Jin says, ‘Never again!” but then I find another competition and show the specifications to her and she says, ‘I have an idea.’ It happens over and over again.”

“I think it’s the burden of dreams,” adds Choi. “You have a vision that you can’t deny.”

A trip to Antelope Canyon in April 2017 inspired ARIZONA!, which is the team’s first installation in the United States.

“It was eye-opening—unlike anything we’ve ever seen anywhere in the world,” says Choi. “We were almost crying because it was so beautiful, calm and unbelievably crafted in terms of scale. It was formed by transparent forces of water and wind that, over time, carved out this beautiful thing. I wanted to capture it in lace form to create that force that is really powerful and yet feminine and graceful and elegant.”

The piece, which will stay in place through March 2019, is meant to depict the struggle with nature and a celebration of the people who make Arizona their home. They are excited to see how the colors of the sunset play off the woven pattern created mostly by a team of Arizonans, as well as how viewers interact and become part of the art.

“For us, it is really the making of the piece we now enjoy most of all,” says Shine. “Our volunteers are the mixing of every strand of life, allowing it to truly become a work of art by and for the community.”

Along with the immersive art experiences, free educational activities and interactive events at the Scottsdale Waterfront, visitors can enjoy various local food options, as well as a beer and wine garden.

“The public will be able to bring their family one day and their friends the next day and have totally unique experiences each time,” says Canal Convergence Public Art Manager Jennifer Gill. “By expanding our event from four to 10 consecutive days, we are now able to offer more programming and performances than ever before. This November is an exciting leap forward for Canal Convergence that you will not want to miss.”

Tickets are now available for Canal Convergence’s Nov. 8 Launch Party, which will be a night of special programming, including live music by New Orleans’ Dirty Dozen Brass Band and the Floatus fire show by Phoenix’s own Walter Productions.

Canal Convergence is produced with support from the City of Scottsdale and the Salt River Project.