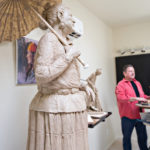 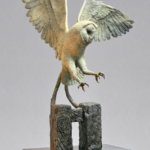 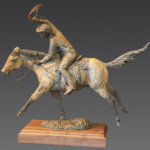 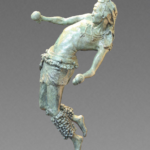 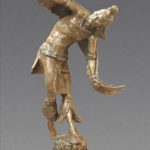 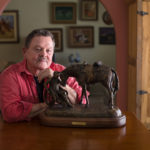 In 1968, Hal Stewart took a road trip with some friends to the World’s Fair in San Antonio. On the way, they passed through Phoenix. It was 109 degrees with no air conditioning in the car, but Hal fell in love with the city. A few months later, he sold everything he had and moved to Arizona with nothing but a $10 bill in his pocket.

“When you’re 28, you know everything. You’re invincible,” he says, laughing. “But I love Arizona — the friendly people, the casual atmosphere, the weather … I’ll never leave.”

Hal has had a lot of jobs in his life. He was in the Navy from 1957-1961, then worked in the construction industry, selling concrete, asphalt, sand and gravel to contractors. “I’ve produced the concrete for most of the freeways around here,” he says.

A man of many hats, Hal has also been a rancher and a cowboy. “I raised and showed Appaloosas and quarter horses,” Hal says. “I had to buy a farm because I had 30 head of horses [at one point]. I would go down on the weekend, irrigate the fields, mow the hay, tend to my cattle.”

In 2000, Hal retired. One day, he found himself fiddling with some clay, creating a small Native American head with a buffalo headdress. When his friend saw what he’d made, he told Hal, “Add a body underneath the head, and I’ll pay for the casting and buy it.”

Thus Hal’s first piece, “The Treaty Talker,” was born. When Hal made a second sculpture, he sold it just as quickly. “This is so easy! I’ll become a sculptor,” Hal remembers thinking to himself.

He produced five or six pieces without any instruction, then took a few courses at the Scottsdale Artists’ School “just to make sure I was doing it right.”

“I got into sculpting by accident,” he says. “When I was a kid, I used to swim in the creek, make figurines out of clay, and leave them on banks. I had artistic talent I never paid attention to.”

Now, Hal’s talent is nationally recognized. The United States Park Service has selected him several times for their artists-in-residence program at both the Grand Canyon and Mesa Verde National Parks.

Following a three-month exhibition of his work at the Desert Caballeros Western Museum in Wickenburg, AZ in 2013, one of his pieces is now a permanent part of their collection. You can also find his work in the permanent art collection of the U.S. government.

Hal’s sculptures depict everything from javelinas to cowboys, Native Americans and barn owls. He derives inspiration from photographs, dreams and his own experiences.

He tells me of a time he was at a Purple Heart convention in Scottsdale and got the idea for his famous sculpture “Hello, Old Friend.”

The sculpture, depicting an amputee veteran in a wheelchair being welcomed by his horse, is undeniably moving. “I’ve had grown men literally stand there and cry [at that piece],” Hal says.

For Hal, that’s one of the most enjoyable things about sculpting. “When you can do something like that, touch people’s lives, influence them for the good…that’s the most rewarding part.”

However, Hal realizes that such talent also requires great responsibility.

“When I get ready to do something, especially when it’s going to be authentic like a certain Native American tribe, I try to authenticate everything because you can’t change it once it’s been cast,” he says.

Take, for instance, his sculpture of the Pima basket carrier. Hal met with five Pima tribal officials to discuss the sculpture and the difference between the Pima tribe and other Native American cultures.

“They were so thankful I contacted them,” Hal tells me. “So many people do it wrong and get it wrong. I did it right and got it right.”

Because Hal’s pieces are so labor-intensive, and the initial research and sculpting can take months, he typically makes about two to four a year.

“First, I have to build an armature (a skeleton for support) and then check for correct proportions. Then I add the clay and position the figure in some type of pose. I continue to check proportions, add clay, sculpt and add detail.”

Hal is known for his details. “At times it drives me nuts, but that’s part of my work,” he says. While he’s sculpting a piece, he tells me his hands are in automatic mode. “It’s wonderful! Your mind is free to take off and take a vacation.”

After that, it’s off to the foundry for another two or three months before the piece finally emerges as a bronze sculpture.

“It’s so rewarding to stand back, look at my creation, and think, ‘I just created something that no one else in the world has ever seen before! Oh, my god, I did that! I made that!’”

Hal realizes the implications of his talent, telling me it’s a gift to be aware of and remain humble with. “Anyone who’s been given this talent, it’s your duty to help inspire others to do the same thing,” he says.

Hal’s done his fair share of giving back, teaching teens at the Scottsdale Artists’ School summer youth program, giving veterans free classes, and working with kids in the juvenile detention facility in Buckeye.

He tells me he’ll give kids who stop by his Hidden in the Hills booth a piece of clay to play with. “I try to get them inspired,” he says.

And, at the end of the day, Hal has his priorities straight. “Be a good person,” he says. “Help others, inspire them, and do what you can do to put somebody on the right path.”