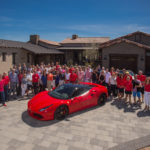 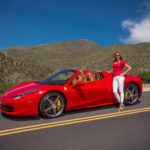 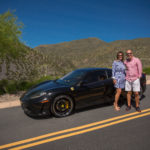 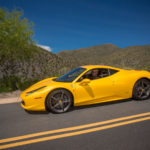 After the completion of the world-renowned Bowman House, an architectural tour de feat designed by Southwest designer extraordinaire Bob Bacon, Jim Ikard decided to offer something unique to a growing demographic of residents in north Scottsdale — wealthy car collectors.

A developer, Ikard bought 20 acres of land near the award-winning Bowman home, built years ago near its inspiration, the Bacon-designed Boulders Resort and Spa.

Ikard contacted Bacon, an architectural designer whose commercial portfolio also includes the Princess Resort in Scottsdale, to see if he could offer his services once again.

After delays caused by the recession, the boutique neighborhood, situated behind gates and an iconic windmill in the rolling foothills near Carefree, is now under construction with new multimillion-dollar properties for sale.

In addition to eight luxury houses, encased amid rolling foothills and untouched desert extending for miles, Windmill Homes will offer something special for a small but burgeoning group of serious car collectors who want to store and keep their luxury vehicles in pristine shape.

According to Ikard, each homesite has the potential for buyers to build an additional “car barn,” which, as it may sound, is like a garage on steroids.

Windmill Homes are the latest high-end development in the northeast Valley, and in Arizona, to capitalize on the growing demand for deluxe car garages.

Appealing to local car enthusiasts, a demographic that fills the tents every year at the Barrett-Jackson Collector Car Auction and Russo and Steele automobile auction, Ikard says each “toy” barn can accommodate multiple vehicles with high-end amenities such as polished concrete floors and lifts to stack cars, generating more storage space.

Size-wise, the barns outperform even a generously proportioned house. While all the sites call for oversized portable garage solutions, the barns themselves can range in size up to 3,600 square feet.

“Most of us have multiple cars, and therefore we want homes with garages that can accommodate those cars,” says Peter Volny, activities director of the Desert Region of the Ferrari Club of America, which covers southern Nevada and Arizona.

“I think the greater Scottsdale area probably has the largest concentration of exotic and collector cars in the U.S.,” Volny continues. “The main factor is a population with a high disposable income and net worth. No. 2 is climate. People store all their airplanes in the desert because nothing corrodes or deteriorates. It’s the same with cars. When you buy an Arizona car, you’re getting a car you know is in good condition. We don’t have the humidity and salt here. It’s an ideal venue.”

Several times a month, members of the non-profit club get together to socialize or drive to iconic places throughout Arizona, often in a convoy, attracting the notice of passing motorists. Most recently, more than 50 members visited Windmill Homes, packing into the Bowman House for brunch and socializing.

The event was designed, in part, to attract attention to the subdivision from a clientele who not only can afford a multimillion-dollar Bacon pedigreed home, but also are in the market for a residence that can accommodate their high-end car collections in the desert environment.

Volny, who joined the club a little over two years ago, says he owned a Maserati and has since purchased a Ferrari — a 1972, 365GTB/4 Daytona. While he may not plan on moving, he acknowledged the appeal of having a massive indoor space for storing vehicles, many of which are driven sparingly but require the utmost in upkeep.

“Ferraris are not exactly your daily driver,” he says. “You certainly need something else to drive around in. Many of our members have significant collections of Ferrari and other models as well.”

Volny, who admits to being “the worst mechanic who has ever lived,” says high-end garages offer options that you can’t find in a traditional garage. Some of the garages have “very elaborate tool equipment and tool storage,” he notes.

In addition, luxury car owners don’t run the risk of taking their vehicles to an automated car wash. “We’re not going to let the brushes and mechanical equipment get on our very, very expensive paint,” he says. Having more space, and tools such as air compressors to blow water off the cars, can benefit drivers who wash their vehicles at home, Volny adds. Whereas, if you were in your Wichita Chevrolet Traverse, you wouldn’t mind running it in the car wash now and again to get the dust off the breaks!

Another plus, he says, is the option for a “man cave” in the garage. Buyers can add seating areas, large-screen TVs, wet bars and other amenities for small or large gatherings.

“When the boys get together, instead of meeting in the family room, living room or a den, we meet in the garage,” Volny elaborates on a friend’s home. “It’s comfortable and it’s lovely.”

While sitting on the living room couch in the Bowman House on a recent Friday, Ikard speaks candidly about the neighborhood he refers to as “a little oasis.”

In addition to luxurious amenities such as car barns, what makes the subdivision stand out is its location. Easily considered the most expensive homes in the area, the Windmill subdivision maintains a small, quaint atmosphere close to a major grocery store and shops. Nearby is Desert Mountain Golf Club, where Bacon also imprinted his visionary style as the architectural designer of not only of the club’s showcase Cochise Geronimo clubhouse, but the land planning itself and the main entry building.

Ikard offers a tour of the $2.245 million Bowman House, which, like the other houses in the neighborhood already built, is an architectural feat of cozy flowing rooms, intimate seating areas and sprawling outdoor spaces. The homes are designed with the natural desert environment and vistas in mind. The houses are placed 45 degrees off cardinal points, maximizing the winter sun. Vigilant placement means that outdoor views are largely unobstructed. Bacon designs homes “so you can be in the sun or the shade, outside, at any time of year,” says Ikard.

Bacon also has named each house after Southwest foliage. The fourth home being built is Joshua Tree, estimated at a price of about $2.7 million when it wraps up construction this spring. The remaining homes will range from about $2.45 million to roughly $2.76 million.