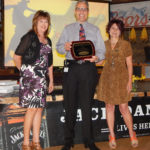 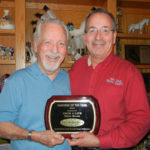 Ambassador of the Year Nominees for 2016
Paul Cocuzza and Liz Castenada.

There is a powerful strength in numbers and working together as a community. Working together is vital for the Carefree Cave Creek Chamber of Commerce to continue strengthening the local business environment with resources, networking, educational opportunities and advocacy. The power of the chamber comes from the strength and support of its members, ambassadors and sponsors who work together toward a common goal – a thriving business community in Carefree and Cave Creek.

To recognize the standout businesses and ambassadors who make a difference in the community marketplace, the Carefree Cave Creek Chamber of Commerce holds its annual Celebration of Excellence Awards. This year the awards ceremony was held on March 30, 2017, at Harrold’s Cave Creek Corral.

“It is such a pleasure to shine a spotlight on our esteemed business and ambassador of the year at the Celebration of Excellence Awards,” said Patty Villeneuve, executive director of the Carefree Cave Creek Chamber of Commerce. “Each of the nominees is a shining example of giving back to the community that supports their business and helping the chamber enhance the local business environment.”

Tech 4 Life, Carefree – Winner, “Business of the Year”
Steve Woods founded Tech 4 Life in 2003 with the sole purpose of helping people with their computer support. Their mission is to provide country doctor service for your technology. Computer support is always highly needed nowadays, especially as the majority of work being done is automated and in a cloud-based system. Contacting Managed IT Support Melbourne services, akin to Steve Woods business, can help anyone and everyone in business who need that support.

Steve and his crew have been invaluable to the chamber and many other non-profits in this community by donating untold hours and dollars in volunteer services to keep everyone’s technology running smoothly, always with a smile on his face.

His corporate career made Steve desire a more purposeful life without overnight travel. Steve’s brother, Tim, introduced him to his love for computers. But it was his dad, local area realtor Woody Woods, who set an example of doing business with integrity, building relationships, and creating community.

“I want to dedicate our Business of the Year award and recent Spirit of Carefree award to my father, Woody Woods,” said Woods. “Thank you, Dad, for being a role model for relationships and integrity for all of us at Tech 4 Life!”

Bryan’s Black Mountain BBQ has won numerous awards over the years for Best of BBQ and has garnered attention from all sorts of national and international media. Not only are you able to enjoy amazing traditional BBQ dishes, you can also savor frog legs, ostrich sloppy joes, gator ribs and a pig ear sandwich on his adventurous eater menu.

“I was never really planning on being a chef,” he says. But life happened. Dooley met his wife, Donna, at a restaurant in Texas, moved back to the Valley and had two kids.

Watson’s Hat Shop – Finalist, “Business of the Year”
When you step into Watson’s Hat Shop, it is like taking a step back in time when things were handmade. “Back then, people took pride in what they wore because it was tailor-made by a master craftsman,” says owner Eric Watson.

Eric Watson’s passion for hats started as a teenager, inspired by the fedora worn by Indiana Jones. Watson’s Hat Shop is a family operated business assisted by some great employees. Even their shop dog, Derby, can use his skills to make a hat!

Featured in many local and national magazines, newspapers and even a few TV shows, Watson’s Hat Shop has garnered media attention from all over the country. Eric was also one of AZCentral’s 2015 35 Entrepreneurs 35 and Younger.

Paul Cocuzza – Winner, “Ambassador of the Year”
Paul Cocuzza serves as the co-chair of the chamber ambassador committee. He attends every chamber event acting as a greeter, a host and emcee. Paul champions the chamber’s mission and vision and is actively involved with member recruitment and retention. He has volunteered countless hours with the chamber and many other community organizations, including ELDERfriends, Scottsdale Airpark Kiwanis Club, Big Brothers Big Sisters, Pro Athlete Chamber of Commerce, Arizona Super Bowl Host Committee and is a member of the advisory board for Green Living AZ magazine.

When he is not spending quality time with family and friends in North Phoenix, Paul is actively involved in volunteering and giving back to the community.

Liz Castañeda – Finalist, “Ambassador of the Year”
Liz Castañeda serves as the ambassador committee chairwoman where she communicates the chamber’s mission and goals to members and prospective members. She serves as a host, emcee and greeter at chamber events and functions. She advocates chamber recruitment, member retention and helps to increase attendance at chamber events.

Liz made Arizona her permanent home in 1990. In 2014, Liz began handling business development at The Niessink Allstate agencies in Cave Creek and Carefree. As a licensed insurance agent, Liz uses her passion for educating and caring for clients.