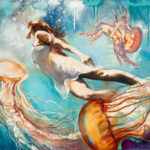 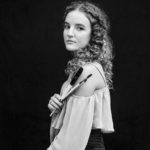 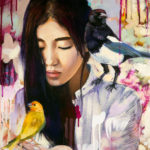 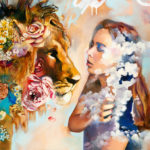 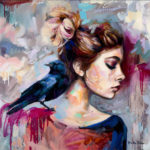 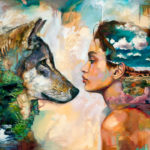 Born into a family of artists, 17-year-old Dimitra Milan has lived most of her life in Queen Creek, surrounded by her beloved pets — a horse, a cockatiel and goats. While she appreciated the creativity around her (her parents, Elli and John Milan, are artists and founders of Milan Art Institute), she didn’t see her own future as an artist. That all changed when, at the age of 12, she decided to take a mixed media art class at her parents’ studio.

“I fell in love with painting,” says Milan. “At first it was just a hobby. I would always take mixed media classes. It had a lot of collage and was more abstract. It was holding me back that I didn’t know how to do realism. My parents encouraged me to learn traditional oil in the way the old masters would paint. I was really struggling. It was so hard. I remember crying because it was so hard, but I stayed with it and eventually broke through.”

As she persevered, a passion and personal style emerged, along with her incredible talent for both mixed media and oil paintings.

The beginnings of Milan’s career took place in a portfolio class, where artists learn how to prepare a collection that exhibits a consistent style in order to break into the professional world of fine art. Tasked with creating four pieces every week for eight weeks, her first go-round was a series depicting houses. It didn’t feel quite like she’d found her groove, but when she decided to take the class again, her style took shape in the form of a portrait: a young girl with a crow on her shoulder. The painting told the story of a young girl facing her destiny, embodied in the symbolism of the crow.

“It was the first time I’d painted a person with an animal,” says Milan. “I used collage, I painted, I mixed it all together. In that painting, I saw this was something different for me. The whole scene was very different from what I had been painting, and I really fell in love with it. That painting launched me into this style, and I started there and kept repeating that. Now, it has become my career.”

Milan’s original passion for collage is reflected in the way each piece begins. Her ideas may come from dreams or photos that catch her imagination. She can usually envision the final piece in her mind before she layers the various photos and pictures, then creates a sketch and oil painting in many layers from that first collage. She is loose with the oil paint, as she adds or subtracts layers, or mixes in collage with gold leaf or the pages of books.

Her style mixes reality with the dreamy surreal. The humans in the photos, which are usually women, are idealized images that she feels anyone can connect with. The animals she loves play a role, each holding a certain set of characteristics in her mind and acting as symbols within the story. They may comfort or challenge, foreshadow or empower, but all her pieces are meant to inspire the viewer, inviting the beholder to interpret their own story and draw meaning from their own perception.

“I think every painting I do has a story, has a message,” says Milan. “But I’m not always aware of what it is when I paint it. I look at it and try to decide what it is. I have to figure it out every time. Sometimes artists have a specific message they want to get across, but that’s not always the best thing if the observer can’t relate to it. It’s not personal. I want my work to be open-ended so anyone can decide what it means to them.”

An example of this storytelling is her piece, “Running the Distance,” which depicts a young girl face-to-face with a wolf. Within the wolf’s fur is a rushing woodland stream, and the young girl’s profile contains a desert landscape.

“Each animal in my paintings is an aspect of the person in the painting,” says Milan. “The wolf is a part of the girl and represents doing something on your own that isn’t what everyone else is doing. For me, it’s like listening to what God says to us and following His plan for our lives. In ‘Running the Distance,’ it’s about traveling and trying to find what it is that you’re supposed to do with your life. It’s about finding yourself — going the long distance and doing what you’re meant to do, even if it’s hard.”

Taking the road less traveled is part of Milan’s everyday life, which isn’t that of a typical teenager. She travels extensively, having taken annual trips to Greece, and has traveled across Europe, Hawaii and the continental United States when she opens her gallery shows or donates time and artwork to charity. Homeschooling allowed her to graduate early, devoting herself to painting and gaining life experiences that fuel her creativity. She also enjoys horseback riding, journaling, photography and spending time with friends, many of whom are also artists. At the Milan Art Institute, she occasionally teaches classes and spends time with artists of all ages, where her feedback has become invaluable to others honing their skills. It’s a life in full.

When she received a call from Hawaii-based Black Sand Publishing, the then-15-year-old began her own career in earnest, as the organization handles business operations, promotions, her website and facilitates the sale of both original and print artwork, currently displayed in galleries in Hawaii, Aspen, Las Vegas, Miami, Lake Tahoe, and Honfleur, France. As she has established herself in her own right (her parents are also successful artists), she places great value on helping others through her talent.

Milan has a heavy social media presence, with more than 50,000 followers on both Facebook and Instagram and nearly 3,000 on Pinterest. She regularly receives messages from aspiring artists and enjoys interacting with them, and seeing how art can transcend geographic and cultural boundaries.

“I think art is a really spiritual thing.” says Milan. “I think my art inspires people because it’s showing a different world, a different way to live. All my paintings are about achieving your dreams or going after what you’re supposed to do. A lot of people just go to work and do what they think they should do, but they don’t actually live out their destiny. That’s my main message. People can look at the piece and get that internally.”

Milan has also touched lives by participating in multiple charity events where she live paints an original piece and donates it for auction that evening. She regularly participates in the annual Comfycozys 4 Chemo Gala each year, where her very first painting for that event in 2013, a 40-by-40 piece completed in just three hours, sold for $5,000 to benefit the charity. Most recently, she donated a live painting for The Pulse of the City Soiree in Scottsdale to benefit pediatrics through music therapy at Cardon Children’s Medical Center, which also featured Grammy-winning artist Sarah McLachlan.

“Because my art has a message of following your dream or your purpose, it goes together with charities for children and people seeking hope,” says Milan.

The future is limitless for Milan. She is young and talented, her paintings are in demand, and she has her sights set on Los Angeles, New York and Europe, and plans to spend next summer living and painting in Greece. She is living her own destiny.