Cecilia Calderon, The Study of Copper 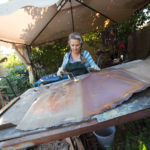 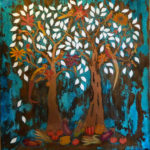 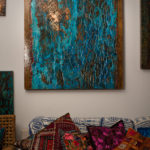 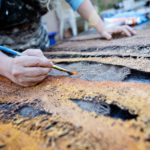 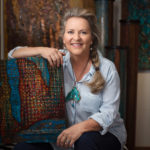 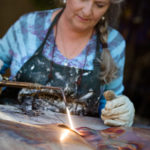 I am not your typical Mexican artist,” Cecilia Calderon tells me. “Here in the U.S., a lot of Mexican artists do either Chicano art, Frida or skulls.” Cecilia can do that, but it’s not something that really inspires her.

Instead, she favors a medium a bit more unusual: copper.

“I work big,” she says. Four to six feet, usually. Most of her pieces are canvas wall hangings, though some are tapestries or sculpture. She works on them daily in her Scottsdale home studio, making 20 to 40 per year. From inception to completion, the process requires several weeks.

For Cecilia, it all begins with “an idea cooking inside.” This can take days, but it’s best not to try and force it. And even then, what Cecilia envisions in the beginning is not what comes out at the end. Copper, it seems, is unpredictable, but Cecilia has mastered the art of letting it take her where it wants.

For example: if Cecilia’s oxy-acetylene torch burns through the copper (the torch produces temps around 6,330 F), she’ll work around the hole instead of tossing the piece.

“Accidents happen,” she says, “which I like. After all these years, I have to trust that if something happens, it’s going to be much better than what I imagined. Instead of throwing it, I keep it and say ‘Where is this taking me?’”

Cecilia torches, cuts and texturizes the copper, applying hydrochloric acid and liver of sulfur to create patinas on the metal’s surface. She can control the patinas around 80 percent of the time; the rest is up to nature.

“If you want green, then the temperature of the air around the copper needs to be warm; if you want light blue, the air should be cold,” she explains. “If I want a specific color, I have to wait for the right time of day.”

Next, Cecilia covers the piece for up to three days. The reveal is always a surprise — she can never entirely predict how the acid and metal have reacted to each other. Once she has her copper, she combines it with fabric like burlap, gluing copper and stretched burlap onto the canvas.

“I love a lot of texture,” she says. Next, she uses oil paints on the piece. Her mediums vary, however. Sometimes she’ll use plaster, acrylic, spray paint or modeling paste.

“I was one of the first women who had an independent glass studio in Mexico City,” she tells me. In fact, she helped found the Mexican Association of Glass Artists.

When her husband’s job took them to Austin, Texas in 1995, she tried to open her own studio once again.

“But no one would take me seriously,” she says. Someone told her, “In Mexico, even though you were very famous, you’re nobody here until you prove yourself.” Cecilia had her portfolio with her, but that still wasn’t enough. They told her that, in order to establish credibility, she’d need to teach. She taught for a year at Laguna Gloria Art Museum before establishing her own studio in Austin. There, she did commissioned glass work for architects, designers and private clients.

Eventually, Cecilia got tired of doing flat work, and started working her glass into 3-D pieces. In search of something to support her 3-D glass work, she wandered into a gallery full of copper sculptures. She asked if they taught, they said yes, and she started taking a copper sculpture class. That was 1997, and she hasn’t looked back since.

What drew her to copper?

“I just love to work with fire,” she says, laughing. “I love [the torch], and I love the patinas that you can make with the copper.”

Her inspiration comes mostly from her own experiences, moods and emotions. It changes daily depending on the moment she’s in. She’s also inspired by nature and likes her pieces to look very organic.

“When I was driving to Sedona, the saguaro [trees] were all around, and I thought ‘They look like people, like guardians of the earth,’ so I came home and made my Guardian series.” She’s referencing cylindrical art lamps. They’re 4 to 8 feet tall, 8 to 12 inches in diameter and decorated in copper, burlap and oil paint.

Though most of her work is abstract, Cecilia also does family tree commission pieces, depicting family members as birds or flowers. They’re popular anniversary or wedding gifts, she says. Interested in purchasing her work? She does corporate and personal commissions, and her work can be seen and ordered on her website. Also, keep an eye out for some of Cecilia’s art if you’re ever at the Gallery at el Pedregal.

When Cecilia’s not making art or taking care of her family, she meditates.

“I’m constantly evolving,” she says, “adapting to different circumstances of my life, exploring new ways to grow and know myself. There’s always a parallel between my personal life and my art.”

Cecilia also dabbles in energy healing, a practice she learned in Mexico.

“It’s a way to help people release their trapped emotions,” she explains.

The similarities between Cecilia and her work are not to be missed. Both are calming, yet further study provides a deeper, more intense energy than what is seen on first glance. There’s complex emotions hidden there, as well as history. The inner workings tell a story of dedication and studied reflection.

“I would like people to lose themselves in the art,” she says.

And in the end, Cecilia has done what she set out to do: provide a place for you to lose yourself, in the best way possible.