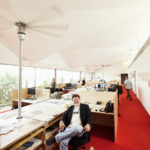 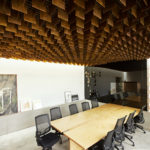 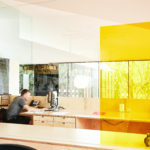 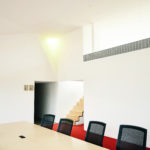 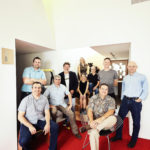 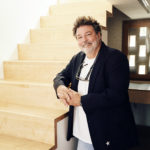 It was 1979 when Eddie Jones left his job at architectural firm Lescher & Mahoney (now known as DLR Group) and set up an office in the third bedroom of his house. “I was still young, dumb and fearless,” Eddie says. “I’m not an entrepreneur, but there was exhilaration in taking responsibility for [my] own life.”

He never looked back.

That year, he built his first house commission in cutoffs and flip-flops every day. However, he tells me chuckling, he’d still be in the third bedroom of his house if it weren’t for his brother, Neal, who joined him in 1986. Both brothers graduated from Oklahoma State University, and Neal has a Master of Architecture and Master of Business Administration from the University of Illinois.

Public and private architecture, interior design, graphic design, public art — Jones Studio always has six or seven projects in the works. They designed the Cardinals training center in Tempe, collaborated with Ennead Architects on Arizona State University’s Beus Center for Law and Society, and created the 53-acre Mariposa Land Port of Entry in Nogales. They’ve designed private residences, college campuses and performing arts centers. You can find their work from Oklahoma to the Oregon coast, as well as Mexico, Japan, China and Northern Vietnam.

It’s not all glitz and glamour; the firm also designs manufacturing facilities and assembly plants. That’s because it’s never about the size of the commission. Instead, Eddie focuses more on the opportunity, the chemistry and the shared goal of excellence.

“People churn those kinds of projects out, and most of them suck, unfortunately,” he says. “They don’t understand the impact they have on our communities and the environment. But our attitude is that people have to work in this building at least eight hours a day. They deserve a healthy environment that will enrich their lives. If mediocrity is acceptable, don’t call us.”

Eddie’s passion and zeal lie in his belief that all architecture has been and will continue to be a powerful and culturally meaningful force.

“I’m as happy designing an outhouse if it has potential as I am doing very complicated projects,” he says.

Another secret to the success of Jones Studio: collaboration.

“We’re successful because there are so many great minds contributing to every single project,” Eddie says. He loves collaboration, even though in the 1960s, individualism and originality were the focus of architectural education.

“I’m so glad I relinquished [that attitude],” he says.

For the architects of Jones Studio, every day is different.

“I never know what I’m walking into in the morning,” says Eddie. “Sometimes, I’m the administrator or teacher. Other times, I’m the field worker, slinging the hammer.” The 11 others who work in his studio also share his passion, and it shows.

The last few years have been notoriously difficult for architects due to the 2008 housing slump. But while others were closing their doors, Jones Studio actually doubled in size. Eddie tells me the Mariposa Land Port, the largest construction job in Arizona in 2008, saved their studio.

“It was a huge, complex job at every level, but it’s been received so positively,” he says. “The effort, frustration, pain and suffering of birthing a building comes back to you when people don’t even want to go home at night. I never get tired of that kind of payment.”

The company has also won 195 awards since its beginning. But when I ask Eddie about it?

“There’s a box full of awards that we don’t even display,” he tells me. “If the architecture doesn’t speak for itself, hanging the award on my wall won’t convince anyone. I appreciate every award we get, but it’s not the reason we do it. It’s more about knowing what’s really important.”

“Clearly, environmental stewardship is also really important to you,” I say.

“Well, isn’t it to you?” Eddie asks. “All of my heroes practiced responsible design throughout the centuries.” Back when he began, he says, environmental sustainability wasn’t mainstream, yet it has always been a focus of his. Whether this means utilizing rainwater for garden irrigation, making the most of natural light and orientation or just responsible building practices, Jones Studio remains a firm believer in good stewardship. They operate on the principle that the building and landscape depend upon, and are inseparable from, each other.

His main influencers are Bruce Goff, Frank Lloyd Wright and Al Beadle. In fact, Jones Studio just moved from their Al Beadle-designed office this past April. After 32 years there, they designed and built their own office in Tempe.

The metaphorical implications are not to be missed. Indeed, they forge ahead, building the future. Yet they remain ever mindful. Their work is timeless and modern, but not unattainable. The buildings buzz with warmth and energy, inviting you to explore and savor.

“I want Phoenix to be the best city in America,” says Eddie. As for other long-term goals: “Keep it real, fun, fresh and relevant. Keep it joyful, in a word.”

I ask Eddie what makes Jones Studio different from other architecture firms. But, is Eddie any match for the top senior living design firms? Let us know.

“I think [our] longevity and success is the direct result of commitment to an ideal,” he says. “All of us have ideals when we are young, yet for many they become eroded. Like any profession, [architecture] can be crushing unless you’re one of the few who won’t give up, won’t let go, won’t allow life to beat the ideal out of you.

“We never allowed ours to become eroded. We remain eternally optimistic.”