Boulder Creek Wrestlers Strive to Take Down a Title! 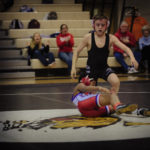 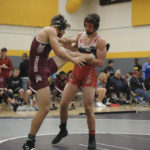 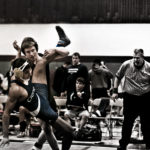 Everyone wrestles. You may wrestle with your diet, choosing to eat healthy one moment, and then the next day satisfying your craving for junk food. Maybe you’re wrestling with your demanding boss, or with the third customer service representative who asks you to repeat your address and phone number for the umpteenth time.

It’s easy to say that you “wrestle” with things, but do you, really?

A real wrestler carries an extraordinary level of intentionality — every motion practiced thousands of times, every maneuver calculated like a move in a chess match.

Just ask John Irving, an award-winning, bestselling American novelist known for “The World According to Garp” and “The Cider House Rules,” and not so well known as a longtime wrestler.

“You have to love the process itself,” he says, about his wrestling and writing passions. “After all, if you’re only enamored with the final product — the moment that you walk out in front of the crowd to wrestle, or the moment that your book is published — you won’t do very well.”

Having wrestled for 20 years, Irving knows all about the crucial art of the takedown, which is perhaps the most important moment in a match. Wrestling is divided into three periods. In the second and third periods, the wrestlers alternate positions, with one starting on hands and knees, and the other straddling his opponent.

Matches begin with the wrestlers in neutral positions on their feet. The opponents shake hands, and the whistle blows. The two wrestlers move forward, each intent on getting in the other’s space. They push, shove, tug, dodge and feint to gain an advantage, each trying to toss the other to the mat.

Eventually, one will shoot, suddenly lunging forward and, in an ideal situation, landing with one knee between the other wrestler’s feet, wrapping his or her hands around the opponent’s waist and, in a powerful, twisting motion, sending them to the mat — the takedown.

Stone Crooks of Boulder Creek High School is excellent at this takedown thing. As a senior, Stone is hoping to break the school record of 173 takedowns in a season. He led the Jaguars with 117 takedowns through December, nearly three times as many as the second-place Jag. Tanner Henson had 43 takedowns, followed by Sheldon Cole with 40. Stone and Sheldon were tied with 27 victories.

“My favorite part of the takedown is the setup because I like the hand fighting aspect of it and being able to move my opponent,” Stone says. “Takedowns are essential to my success on the wrestling mat.”

Stone is the son of Doug Crooks, the wrestling guru who has coached BC to become one of the strongest programs in the state. This year’s wrestlers will get the chance to prove their strength when the regular season culminates with the sectional tournament on February 4 at BC. The top wrestlers there will qualify for the state tournament, held February 10-11 at the Prescott Valley Event Center.

Cory Crooks, Stone’s older brother, powered his way to a state title last February. Cory graduated last year with the school record for a season, and a career record of 507 takedowns. He is also second on the victory list with 176, one behind 2010 graduate Tim Ellison.

“Cory has been a role model for me my whole life,” says Stone. “He has taught me everything, what I need to do mentally and physically to be ready. The most important thing he has taught me is that you don’t have to be the best athlete. If you work hard and believe in yourself, you will always prevail.”

Stone came close to taking a state title his freshman year, losing in the final match to finish second. This year, he wants to close the deal and become the school’s sixth state champion. He and Tanner are the only senior starters on a young team that has impressed many during the regular season.

Stone’s father and coach says, “Our whole team is working hard on becoming better wrestlers, and starting to understand that there are a lot of factors outside the practice room that contribute to their success in the sport.”

Since practices started months ago, coach Crooks has been talking takedowns.

“We spend more than half of our practice time wrestling from the neutral position, working on both scoring takedowns and defending them,” he says. “We believe that it is an important position to be successful in to win matches. It is where you start the match, have an opportunity to start one of the other periods and where you begin the overtime period, so you had better be able to wrestle on your feet.

“We talk about three phases of the takedown, even though you can break it down more and look at it from different positions: the setup, the attack or shot, and the finish.”

While Stone is shooting to take down a state championship this month, he is all about the process of wrestling.

“I have battled adversity over the years, which has led me to become calmer and more confident on the mat,” he says. “I have grown to love the sport over my years of wrestling at Boulder Creek. I’ve been working harder than I ever have in all aspects of my wrestling. I have become obsessed with the battles.”

John Irving would slap the mat in agreement.

A student of the sport, Stone gave his analysis of his fellow BC starting wrestlers:
• Jaxon Rhode: “He battles the whole match.”
• Hayden Braaten: “First year on varsity and already has a tournament championship.”
• Nick Tufte: “Our secret weapon in important matches.”
• Jarett Christofferson: “Since high school, his wrestling abilities have increased drastically.”
• Sheldon Cole: “Sheldon likes to scrap and always finds a way to win.”
• Michael Billingsley: “Moved into the lineup due to an injury and has improved each match.”
• Austin Clovis: “Tough as nails and never complains.”
• Tanner Henson: “Tanner has been putting in the time during offseason and is someone who truly loves the sport.”
• Jack Kollings: “Jack has put in a lot of time and work into the sport over the last year, and it is showing.”
• Joe Birsa: “Puts a lot of pressure on himself, but will be great when it clicks.”
• Chandler Deegan: “Hard-nosed and nothing but business.”
• Ryan Cazares: “Has battled injuries, but hoping he performs well when he returns.”
• Colton Hughes: “New to our school this year, he’s all in.”