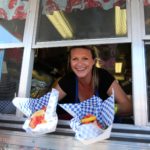 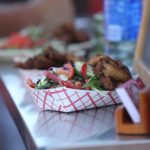 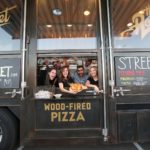 I didn’t know I’d like lamb, but I like your lamb.” Comments like this one are music to the ears of Lance Smith, co-owner of the Grilled Addiction food truck. Lance doesn’t let an “I don’t like lamb” remark go without yelling to his staff, “Get me a lamb chop out here!” He gets a kick out of converting people.

The high-tech corporate executive turned food trucker estimates he’s handed out at least 100 samples of chops since he and his wife, Beth, entered the food truck business four years ago. They focus on grilled American fare, with items like tri-tip and glazed pork sandwiches, and a signature grilled lollipop lamb chop that’s blazing a trail for new lamb lovers.

“Food trucks need something unique that puts them on the map,” advises Lance.

The couple also runs The Wandering Donkey, which Lance likens to a Chipotle on wheels. The 2015 Arizona Taco Festival Grand Champion, this truck has gourmet burros, bowls, tacos, nachos, carne asada fries and the like. South American lamb barbacoa is deliciously true to form.

These two trucks are among the approximately 70 slated to spread their food love at the Street Eats Food Truck Festival at Salt River Fields on February 11 and 12.

The Smiths spend about 50 working hours preparing for the event. They meticulously organize their culinary-trained chefs to marinate meat, chop veggies and trim and prep the many racks of lamb that yield several thousand chops. Their chefs also make salsas from scratch: habanero hot, roasted tomato and garlic, and mild tomatillo.

“Street Eats is one of the biggest events we’ll do throughout the year,” says Lance. “It gives us the opportunity to have a presence and for people to try our food and see how we operate.”

Brides-to-be and event planners come out to this event, shopping for potential caterers. The Smiths now cater for the Arizona Cardinals, the Chicago Cubs, Charles Schwab, American Express and many others — thanks to exposure at events like this.

“Name a company and chances are we’ve done something for them,” he adds. “We never dreamed when we first came up with this vision that we would be where we are today.”

The food truck rave has allowed people to get into the business without risking hundreds of thousands of dollars, he says.

“It also allows people to make a name for themselves through a natural progression that can eventually become brick and mortar,” says Lance, who plans to open their first restaurant, The Thirsty Donkey Gourmet Tequila and Taco Bar, in 2017.

Most importantly, eaters enjoy the ride.

“It’s kind of like the adult carnival of food comes to town — the ride is the food and it takes you on a journey,” jests Lance. “It allows chefs to showcase their food, and people to try something they never thought of trying. It’s a lot of fun and gives people the opportunity to explore their palate.”