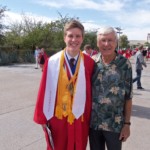 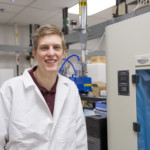 C’mon, dude! You’re doing too many things at once, moving too fast, working too hard! Relax, my friend! Let’s just chill out, hit the movies, play some Xbox, hang out and wait for graduation to happen …”

You might think Christopher Balzer’s friends at Boulder Creek High a few years ago would have shared this advice. Not so, for two reasons. First, most of his friends were also highly motivated.

And second: “They know me,” Balzer said with a laugh. “Even in high school when I was always going 100 mph, no one was telling me to slow it down.”

In Anthem, Balzer earned A’s in all his classes, with weighted credit for Advanced Placement courses adding up to an astounding 4.79 grade point average. Yet the scholastic pace at the top end of BC High is such that Balzer shared top-of-the-class honors with two other great students, Daniel Suto and Emily Jensen. Far from the stereotypical awkward egghead, Balzer was also a top-class athlete, a key player on Boulder Creek’s 2014 state championship volleyball team.

Down in Tempe, Balzer continues to metaphorically rush the net of academics, spiking one test and project after another. At Arizona State University, Balzer is taking a challenging major of chemical engineering, yet has an above-the-net GPA of 4.20.

But that’s not the big news.

He graduates this spring — a full year early, thanks to the intense workload of AP courses at Boulder Creek. His fast pace and success continued in college, where he is one of only three ASU students to receive the Goldwater Scholarship.

Even that isn’t the big news.

A few months ago, Balzer was accepted into the prestigious University of Cambridge, where he plans to continue his studies of carbon capture, which has the potential to mitigate man’s impact on the environment.

Balzer recently became the first student from ASU to receive the Churchill Scholarship. The Winston Churchill Foundation awards 14 scholarships per year, with award of around $50,000 to cover tuition, books, travel and other costs.

He plans to continue studying the fascinating field of carbon capture — ways to contain carbon dioxide before the potentially hazardous gas reaches the atmosphere. He explained he has been involved in kinetic modeling to determine how fast certain nanoporous materials pick up CO2 as compared to other gases. At Cambridge, he plans to continue working on a supercomputer: “Computational software gives us pictures; we can track gas molecules over time, [which is] something we can’t do experimentally.”

Balzer is fueled by an urgency to continue his carbon capture work, as “atmospheric CO2 concentrations are at historic levels, and we have the continue to develop technologies to reduce human impact.”

Who knows what young scientists like Christopher Balzer will come up with next to help clean the air?

“I didn’t go into college with expectations to do carbon capture,” Balzer said. “But I’ve always been looking to get into environmental sustainability research. This (carbon capture) kind of fell into my lap, and I’ve been running with it ever since.”

In case you haven’t guessed, this is one highly self-motivated young man. As his father, John Balzer, noted, “Everything he’s done, he’s done on his own. Nobody pushed him into any accomplishments he’s made. He’s been very focused on his education.”

John Balzer and his wife Lori Ryan, both engineers, moved to then-new Anthem in 1999, with sons Christopher and Kevin. Christian’s grandparents, Andrea and Edward Hine, also were part of Christopher’s growing-up-in-Anthem experience.

“The best things about growing up in Anthem,” Christopher said, “were the many community activities, especially for kids. I met most of my friends through playing sports in Anthem. When I got older, I found Anthem to be convenient as all of the schools are close together.”

Though he noted he could list many more, he said his two most influential teachers were Shawn Towner (AP literature and composition) and Julie Baldwin (AP calculus).

The future carbon-capture scientist found advanced placement classes to be an economical way to capture college credits. Taking a heavy AP load trimmed a full year of college. “Just between fees and tuition for a year, that adds up to $15,000,” he reckoned. But don’t forget supplementary savings: “Financial benefits often snowball because when you take a lot of AP classes, you’ll tend to also know about and receive more scholarships.”

Balzer, who could be the AP poster boy, offered a few tips for high school students pondering classes that can translate to college credits.

“I know some students worry about the time commitment of AP classes, especially when they are involved in sports, a job, etc.,” he said. “My first recommendation is for students to take control of choosing their classes. Sometimes students blindly follow their counselors, friends, or parents on what classes to take. They should look into all of their options, talk to teachers/counselors to understand their options, and look into how classes could apply to college programs they are interested in.

“My other recommendation is to not be afraid of taking AP classes just because of the time commitment. Some people end up not signing up for any AP because they think they can’t do it. If a student is interested in an AP course, they should take it. It saves a lot of money in the long run, and I found that AP classes are much more constructive and personal compared to taking college courses.”

Balzer’s analytical mind is trained to look not just at direct actions, but indirect, big-picture threads. He sees taking challenging classes in high school as building brain muscles for the heavy lifting at the college level.

“Sometimes it doesn’t seem worth it,” he reflected, “but taking all of those classes and tests set me up for success in college. College didn’t seem like a big jump from high school because of that.”

Even so, the lab work he tackled at ASU had its ups and downs. “I was definitely drained at some points. I put a lot of work into some projects, and sometimes when you put a lot work into a project and doesn’t pan out, it’s hard to pick yourself back up.”

The advice he received from professors, peers and mentors: “Always move forward. There’re so many different ideas, even when one doesn’t work out, it opens up a new idea.”

Winston Churchill, the great leader looming over the scholarship that will fuel Christian Balzer’s post-Arizona education, put it in slightly different words:

“Success is the ability to go from one failure to another with no loss of enthusiasm.”