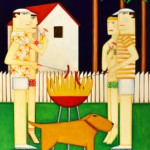 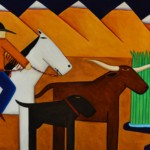 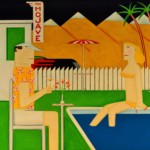 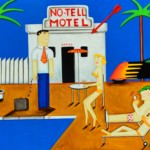 When asked to describe his large-format oil paintings, Robert Ransom doesn’t speak in great length about them. What might first appear as modesty reflects something beyond that: a belief that his paintings communicate their message in a language all their own.

“It’s hard take a visual statement like a painting and transfer that,” says Ransom. “The paintings kind of speak for themselves.”

And they do. With their bold lines, vivid colors and geometric figures, they don’t sit quietly in the corner waiting to be seen. They jump forth from the wall — begging the viewer to experience them, to hear their story.

And to hear the story of the one who created them.

Beginnings
It was during Ransom’s grade school years when he first was introduced to art. Growing up on the west side of Los Angeles, he enjoyed the extensive art community that surrounded him. Often he gravitated toward the works of American realist painter Edward Hopper and the many WPA (Works Progress Administration) paintings in L.A. Ultimately these paintings would influence Ransom’s own style.

However, his current style did not completely develop until he attended graduate school at Northern Arizona University in Flagstaff, where the mountains and the town’s cowboy culture surrounded him.

“I went to graduate school, and that’s where I got the influence of the Western part of the arts,” says Ransom. “I have two things going on: the beach and the west side of LA where I was brought up, and then Flagstaff.”

And so, Ransom’s Americana pop art was born.

Full-time Artist
Ransom’s success as an artist came by way of encouragement from an unlikely place. While working as a volunteer art teacher for a senior citizens’ painting class, one of the students suggested that he should enter his paintings at the state fair. Thankfully he listened to that advice.

“My paintings won first place, second place and best of show,” Ransom recalls. “The judge from the state fair came over to my house that evening and bought three of my paintings. From there, that took me to a different level of marketing my work.”

He still needed to earn a living though, and did so installing wallpaper. But when a gallery not only offered him commission for his artwork but also a salary, he finally had the ability to live out his passion full time.

Now Ransom creates in his own home studio in Sacramento, spending roughly six to eight hours a day there.

“I think of an idea first, then I sketch it out in black and white on canvas, and then kind of adjust it at that time to get the ratios, like the arms and heads,” he explains. “Then I start adding the colors into those zones, and then keep adding colors and changing things until it’s finished.”

He also uses the Flemish Technique from the 1500s. By following this technique, he creates a sort of glow by applying the varnish in layers.

While the way he paints is more deliberate, his inspiration comes from a different place — a place all his own.

“Just all spontaneous,” says Ransom of his work. “Subconsciousness. There’s no planning that kind of thing. It’s just what I think of at the time.”

Appreciation
But again, Ransom won’t explain what he was thinking. He will instead point in the direction of his painting.

Standing before his work, feelings of familiarity and of memories of days gone by will arise in the viewer. A sense of mystery also creeps up, and a desire to know the secrets that hide in the faces of the men and women who lounge by the poolside or grill hotdogs on a hot summer’s day.

Don’t be too quick to interpret it though. Wait and let the paintings speak for themselves.

But who will speak of the artist? Understanding Ransom certainly creates a better understanding of his work. Mark Pascale, curator at the Art Institute of Chicago, describes him with precision. “Ransom’s appreciation and interpretation of the west is the main theme of his work,” Pascale says. “I consider Ransom to be the Andy Warhol of the American pastime.”

For anyone who knows anything about art, that comparison says a lot.