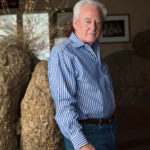 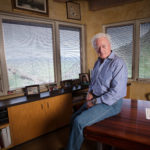 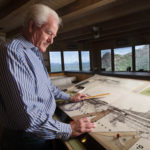 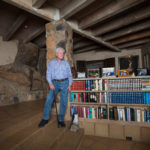 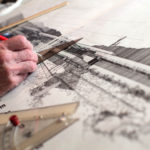 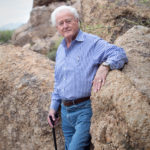 High atop one of Carefree’s ruggedly elegant mountains sits architectural designer Gerry Jones’ studio. Gerry pioneered extreme terrain architecture in the Southwest, designing residences that respect and incorporate their natural surroundings, many of which perch on seemingly impossible homesites, clinging to mountainsides or blending in amidst massive boulders.

“People say my houses feel so comfortable and natural,” says Gerry, “and they should, because they are natural.”

From the large, plate-glass windows above his desk, the expanse of Carefree and Scottsdale can be seen stretching into the distance. Gerry notes that, from this vantage point, everything manmade has been constructed since 1959. It’s a time period that closely mirrors his career presence in the Valley – one that spans 64 years.

At 92 years old, Gerry is entirely self-taught and is in the process of completing two mountain homes in Carefree. If you’re counting, that’s a total of 323 luxury residences since he first arrived in Arizona in 1952.

Many people ask Gerry to define his award-winning style, which ranges from modern to traditional. When pressed, he has characterized it as “Southwestern textural,” though it’s not confined to the Southwest. Some homes are adorned with copper and geometric elements, reflections of his 17 years as an instructor at Frank Lloyd Wright’s Taliesin West School of Architecture. His interiors not only feature rocks and boulders incorporated into the design, but wooden beams and ceilings of rough-sawn redwood, every plank laid out in painstaking detail under his direction – a nod to time spent in the Oregon timberlands. He has built many homes beyond Arizona, including on Maui and in Carmel, Albuquerque, Portland and Palm Springs.

“Some say my houses don’t have a uniform design,” says Gerry, “but that’s because I don’t tell people they ought to live in my preconceived house – I design a house for them. Many architects create their success by designing a house that becomes popular and then repeating it, shoehorning every client into that house. The owner’s likes, dislikes and ideas are brushed aside. If I have a new client and a new site, I should have a new design.”

There is nothing about Gerry’s work or life story that can be condensed into a conventional box. Indeed, life has taken him down so many remarkable paths that to tell his story in full would fill many volumes, just like the extensive array of literary works he has voraciously read through the years. Gerry defies convention and never does anything halfway.

His resourceful nature was cultivated during his Depression-era Indiana childhood. With only an elementary education, he left school and home at the age of 13 to seek work. Gerry is a decorated Marine veteran of both World War II and the Korean War. During his four years in World War II, he served in the Pacific theater as a sergeant in the First Marine Division and was a founding member of the elite Scout Snipers (now known as Force Recon), fighting for three and a half years in the jungles of the South Pacific and on Okinawa, where he was wounded and awarded the Purple Heart.

Gerry credits his strong observational skills, not just for his design acumen, but for his very survival.

“When I think about my unorthodox life, if I had to put it in one word, I believe that word would be ‘observation,'” he says. “The most important thing that allowed me to do what I’ve done is that I’m an observer. I don’t just look, I see. My ability to observe is what kept me alive as a scout during my time in the Marines.”

When the war drew to a close in 1945, Gerry decided to stay on in China, training with China’s three top martial artists. He studied China’s history and philosophy, and played jai alai professionally.

His visits to multiple Buddhist monasteries in the mountains were the catalyst for his architectural career. It occurred to him that he had never seen a structure in the United States that wasn’t built on flat land, or land that had been made level. The monasteries utilized the existing terrain to its best advantage. Streams were channeled into kitchens and bathrooms, and floor heights varied according to the topography of the land beneath them.

“These enormous buildings are so old, but here they were, rock solid,” says Gerry. “They were built right into the boulders and the mountains. In A.D. 700, the builders didn’t remove acres of solid granite rock in order to put the floor on one level. They adjusted the levels to fit the site. It was perfectly logical.”

After returning to the U.S., Gerry spent time in Oregon remodeling and building homes, using rolls of butcher paper to sketch designs in his efficiency apartment, but was called back to teach self-defense to Marines in the Korean War. In 1952, he moved to Phoenix and began working on the south slope of Camelback Mountain, near 48th Street and Camelback Road. His work there still stands, some of it 60 years old. Gerry’s homes are highly sought-after, no matter the zip code.

On steep and craggy slopes, he put his theories to the test in earnest, both designing and building to fit the terrain. Buyers liked the natural aspect, and Gerry enjoyed pushing the outer limits of his concepts – bringing boulders right into the home, or setting glass with no frames into solid rock. Soon, wealthy buyers wanted larger homes on increasingly challenging, high-elevation building sites.

“There was a time when I couldn’t find anybody to build my houses,” says Gerry. “Many of the builders didn’t know what to do because they saw my plans for ideas that had never been done before. How do you cut a piece of glass into a solid boulder rock with no frame? I figured it out through a lot of trial and error with my own tools and managed the construction projects myself for my first 39 years in business.”

He was soon doing what everyone else said couldn’t be done, without ever having taken an engineering or architecture class. He points out that the Greek root of the word architect literally means “master builder.” There have been skeptics, but “impossible” just isn’t a word in Gerry’s vocabulary. Even in his spare time, he enjoyed conquering mountains, rock climbing near what is now his home – an activity that would soon play a major role in his future.

“The key to putting houses in rock formations is careful observation,” says Gerry. “That’s it. You have to see it with your eye and understand what can be done. Sometimes it’s subtle, and I return to view the site many times, including in early morning and late afternoon light.”

It wasn’t long until word got out about Gerry’s talent. He received a call that would change not only his own life, but the course of architectural history in Carefree and the Southwest. In 1952, he was called upon to do a remodeling job on the homestead of the future founder of Carefree, K.T Palmer. An introduction was made to Tom Darlington, who contracted work with Gerry, as well. Later, when the time came in 1957 for Palmer and Darlington to map out their new venture – the town of Carefree – they knew exactly who to call.

“They knew I was a guy who was very interested in mountainous desert terrain, and that I was a rock climber,” says Gerry. “They had acquired the first 1,400 acres on the east slope of Black Mountain and asked me to come out and do their rough land planning.”

Between 1957 and 1959, Gerry laid out all the roads and lots of the original town. He did it on foot, walking and climbing every inch of the land.

“Humorously, some of my friends called me Moses,” says Gerry, “walking through the desert with my staff, killing rattlesnakes and leading the bulldozers. I knew exactly where I wanted the road to go. The bulldozers just followed me.”

In 1959, a 2.5-acre lot in the new community of Carefree on the west side of Stagecoach Pass could be bought for $1,700. That year, Gerry designed and built the very first home in Carefree on Bloody Basin Road. Inside, the home’s fireplace is built directly into the natural rock. Darlington and Palmer themselves entrusted Gerry with the construction of their personal residences, and the trio teamed up on 23 joint ventures, with no contractual agreement beyond a handshake. Gerry never stopped working. His list of clients reads like a who’s who of the corporate, arts and entertainment world, from the Whitney family to Hugh Downs and the legendary radio personality, Paul Harvey.

While his work isn’t confined to Carefree, the town holds a special place in his heart. It’s the place he and his wife, Leslie, call home.

“Carefree, for me, is like a child,” says Gerry. “I was here at its inception. I watched it grow. I’ve seen it fall down, stumble and scratch its knee. I’ve seen it do some unique things, and I’ve seen it make mistakes. But when I sit here today in my office, looking east at all the development since 1959 … if you look at it like that, you realize that you’ve definitely produced something of value.”

Year after year, Gerry has continued his dedication to hard work, both mental and physical, respecting the land with responsible building practices and teaching others to do the same.

Gerry Jones-designed homes stand as a testament to his ability to innovate and originate. And he’s not done yet.