An Ode to Whiskey 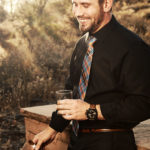 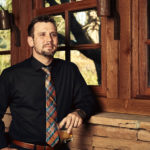 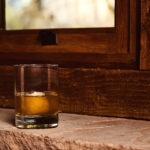 Lance Carver leans back in his chair, happily worn from a good day’s work. Pausing for a moment, he raises a tulip-shaped glass to his nose and takes a hearty whiff.

“The first thing is the scent,” he explains, then holds the amber liquid under his nose once again, taking a calm, deep breath.

“That first sniff clears your nostrils. It’s the second and third sniffs that give you some of the true flavors of a good whiskey.”

With that, he takes a small sip and rolls it around his tongue, then swallows and smiles.

Whiskey is a drink that has personality and distinction of its own. It defines its enthusiasts as much as they define it, and Carver seems to fit the image.

By day, the longtime Arizona resident can be found outdoors, hiking, biking and enjoying all that the desert foothills have to offer. As hard as he plays, he works even harder. By evening, he manages Cartwright’s Sonoran Ranch House, one of the busiest restaurants in the North Valley.

And by nighttime, he is ready for some downtime. He sits back, relaxes and appreciates the very best that a good glass of Irish whiskey has to offer.
“My favorites are ones that have more of a smoked flavor to them,” he says. “I’m a pretty hearty eater, so I like smooth, smoky whiskeys.”

On nights like these, with a cool breeze tempering the desert heat, he prefers them neat — straight out of the bottle, poured into a glencairn to release the subtle vanilla or caramel aromas. On hot days, he uses a solid cube of ice — specifically “The Rock,” as they call the large, round, single cube at Cartwright’s, so that the bold flavor does not become watered down.
Though he has his style, don’t confuse Carver or his whiskey for the gentleman type. What cognac and gin are to the suit-clad business types, whiskey is to guys like Lance.

“I’d say whiskey drinkers are hardworking, steak-eating, down-to-earth Americans,” he says with a wry smile. “Me, I like mountain biking, taking my truck out and going fishing. Whiskey suits my lifestyle.”
And the crowd who comes to Cartwright’s, where whiskey has its own shelf and even its own page on the liquor menu, seems to support that.

In the United States, it is the Southeast, home of famed distilleries based in Kentucky and Tennessee, where whiskey is most popular, and sales of whiskey worldwide have been growing at a rate of about 5 percent annually in recent years, says the U.S. International Trade Commission.

For Carver, whose passion brewed as he grew up in the restaurant business, it’s not about statistics; rather, it’s about simple appreciation.

“Kicking back having a nice glass of whiskey at the end of the day is my style,” he says matter-of-factly. “It’s an acquired taste.”

Slowly sipping a glass of Elijah Craig, he kicked off his shoes and explained a few things while making the wince at the end of his sip look like a deep drag from a smooth cigar.

“First off,” he says, a grin forming in his eyes, “there’s the issue of the ‘e.’” He went on to explain that in Scotland, Canada and Japan, the liquor is spelled “whisky” — without the “–ey.” Here in the United States and in Ireland, where whiskey is said to have been invented so that the Irish wouldn’t take over the world, it is spelled with the “e” that we all know and love.

Whiskey is made from grain. This is what distinguishes it from other distilled beverages. Whiskey is simply distilled beer. Like beer, grains are the source of the sugars necessary for fermentation.

The grain is steeped in hot water to release sugars, and the remaining sweet liquid, called “wort,” is brought to room temperature. Yeast is added to convert the sugars to alcohol in an anaerobic process, basically creating the foundation for beer.

The only difference is that beer brewers add hops to balance the sweetness and as a preservative, but whiskey flavors are balanced by aging them in oak barrels. The types of grain used, the distillation method and the particular casks used to age the whiskey are what make each flavor of whiskey a little different.

“A solid whiskey is aged for at least three years,” Carver explains. “It is a requirement for Irish whiskeys to age at least three years, which is probably a big part of why they are my favorite. The smooth and bold, smoky flavors I like are fermented at least that long.”
Malt whiskey is made from malted barley, while grain whiskey is made from different types of grains, typically rye, corn or wheat. Grain whiskey (Maker’s Mark or Jack Daniels, for example) is enormously different from, say, Johnnie Walker Black, Yamazaki from Japan, Amrut from India or any malt whisky from Scotland. True whiskey aficionados insist that the word “scotch” is a better choice to refer to those brewed exclusively in Scotland.

The nature of whiskey is that it is meant to be sipped in small quantities, not chugged by the glass like wine or beer.

For people like Carver, whose days demand a respite as the sun goes down, it creates a perfect, contemplative buzz and comforting warmth up and down the gullet.

And for those, like Carver, whose discriminating taste is less about swagger and more about satisfaction and savoring the good, natural things in life, whiskey is just one element in taking each day one moment at a time and enjoying each moment to its fullest.

Like his whiskey, men like Carver will never go out of style. His quick wit and earthy charm go perfectly with his choice of bold at the end of the day. Whether you love whiskey or not, that’s a pairing that’s worth appreciating.