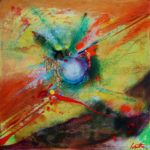 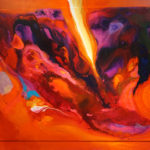 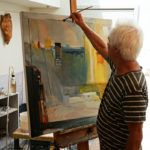 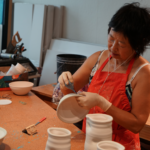 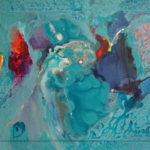 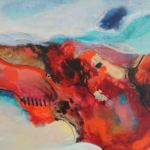 The concept of yin and yang is a theory of opposites. Everything has a darkness (yin) and a light (yang), and one cannot exist without the other. For night, there is day;  for cold there is heat; for birth there is death; and for masculine there is feminine.

When the sun rises upon a mountain, light illuminates one side while the other remains in darkness. As the sun moves across its arc, the line between dark and light sides becomes blurred, and they begin to look alike. This, too, is yin and yang: two parts of the same whole.

Michael and Sumati Colpitts fit together in much the same way. Both accomplished artists in clay and other mediums, like the mountain and the sun, years of learning from each other’s strengths and weaknesses, both creatively and personally, has blurred the line between their opposites.

The fact that the universe brought these two souls together is a story in itself.

Michael grew up in Boston, raised by his hard-working Lithuanian grandfather—a man to whom he owes much of his work ethic and compassionate nature.

Far from Boston, Sumati was born in Taiwan. When her father left for the United States looking for a better life, the family soon followed, landing in Evanston, Illinois.

Throughout their lives, both Michael and Sumati were encouraged to develop their creativity. They also learned that the process is the lesson, and found the beauty in practicing each new technique they learned until they achieved the look and feel they wanted.

Perhaps it was chance, or maybe it was something much bigger that allowed their paths to cross in an ashram in India in 1989. Both were assigned to work in a ceramics studio, creating and selling art for tourists. They forged a friendship as colleagues at the time, not knowing that their story was not over.

Twelve years later, through a series of serendipitous events, life took them by surprise when their paths again crossed in Sedona.

Sumati was shy, while Michael was outgoing.

Michael loved the intricacy of sculpting, while Sumati had worked on a potter’s wheel and done hand-built pieces.

Sumati was nurturing and gentle, while Michael was bold.

Despite their differences, they matched on an energetic level. Both were willing to grow in skill and in their soul journeys, and together, they found, they could accomplish so much more than they could separately.

Seven years and a lot of clay later, they were married.

Today, Michael Colpitts describes himself as a ceramic sculptor, painter and meditator. His inspiration has come from around the world, especially Africa and Southeast Asia. His work often invites the viewer to look within.

Among his most collected pieces is a series of striking veiled masks. Each is its own study in texture and form, but even more impactful is the spiritual element. He creates them with hollowed eyes, leaving their faces and their meaning open to interpretation.

When he fires each veiled mask in the couple’s 7-ton brick kiln, a monument in itself that Michael built by hand, flames dance across each one in unpredictable ways. The results are stunning: fire breathes life into each piece as shadows and depth emerge in the folds of the clay. The results are remarkable.

Sumati is a sculptor, a massage therapist and a gourmet cook. The wisdom of her hands has always been her strength.

She has become known for her portrayals of animals, which, in stark contrast to Michael’s veiled masks, are characterized by their inquisitive and cheerful eyes. Each seems to have a grin on its face, and one can’t help but notice the resemblance to their creator’s elfin welcoming smile.

Michael first encouraged Sumati to try sculpture. Though her first pieces left much to be desired, she continued to practice. After years of hard work, her clay sculptures are not only collectible, they’re downright joyful.

“I try to capture the essence of the animal or the figure, and give them an expression that makes you feel good when you look at them,” says Sumati.

Finished pieces are first air-dried for one to two weeks, then fired at temperatures up to 1,600 degrees. Finishes like iron oxide or manganese dioxide are sometimes added to create color and sheen, but for other pieces, they let fire do the work.

Next, they are skillfully arranged inside the kiln for a second firing, this time at about 2,300 degrees Fahrenheit. The anticipation they both feel to see what emerges is almost palpable.

“You never know what’s going to come out,” says Sumati. “It can be the most fantastic thing, or the very worst. You just don’t know until you see them, and it’s so exciting each time!”

“We started off in clay together, but about 15 years ago, Michael said, ‘I need more color in my life.’”

As with all of his work, Michael’s painting is an expression of his inner self. Bold and sometimes contrasting colors make their way to the canvas in vivid splashes.

“The brightness makes me feel good,” he says. “I’m trying to give people the feeling of being uplifted by color combinations, but also by composition.”

It can be a challenge, Michael adds, to give a painting’s “quiet areas” interest. Use of gesso, fabrics, papers, light charcoal, modeling paste, grog, sand, thick oil colors, acrylic washes, gold leaf and transparent oil washes are all part of creating focal points within each piece.

These focal points seem to reflect what so many have come to realize about this dynamic couple: taken as a whole, they’re pleasant enough, but given a closer look at their lives, the beauty can be found in the finer details.