A Rainbow of Possibility 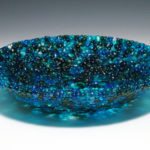 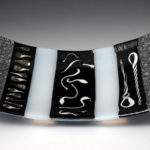 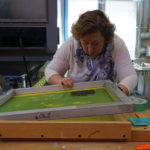 Over two millennia ago, Aristotle opined that art imitates life. It took more than 2,200 years of human pondering before Oscar Wilde countered his theory, saying that it is life that does the imitating. Art, he said, provides the language we need to appreciate life, and without it, that appreciation would not exist.

There are few places Wilde’s philosophy is more obvious than at Creative Gateways artists’ cooperative in Sedona. Here, artists hone their skills while collaborating with each other for ideas and suggestions, each contributing pieces of their own unique perspective to benefit each other’s work.

None of it is by accident.

There is no better way to understand Pilisa Rainbow Lady than to look at her art.

Pilisa is a fused glass artist. Each day in her workshop, she carefully chooses layers of glass—opaque sheets, powdered glass called frit, thin rods of glass called stringers, slices of millefiori canes and copper washers or mesh and other shapes and materials her heart desires.

Every material has a purpose, and each addition will add an element of expression to the final piece. On the final layer, she often adds a sheet of clear glass, adding depth and a sense of unity to the design.

Each piece goes into the kiln, where all of the glass is melted together to create one thick piece of glass, called a blank. The blank is laid over a mold and fired again. The heated glass sinks into the mold in a process called slumping, and as it cools, it is forever frozen in the moment in the shape in which it was intended.

It’s not so unlike the human collaboration she has nurtured.

It’s the unpredictable element that Pilisa embraces, both in her art and in the community she is creating. She’s not afraid of new ideas, original inspiration and unique ways of working. In fact, those things energize her most.

Creative Gateways collaborative art space evolved from that philosophy, and it’s part of a bigger picture. Her long-term vision is to create a permanent, sustainable and intentional community. on land just outside Sedona where she can bring together a “tribe” of people who can contribute their own passions and skills.

It’s far from the beaten path for a Midwestern gal who started in the software business.

On this day, Pilisa sits comfortably on a stool in her Sedona workshop at Creative Gateways. She’s wearing jeans and a loose top, and short, untamed red hair frames her face. She’s surrounded by supplies and projects, some belonging to her, but others belonging to fellow artists she has come to know as friends. This, it’s clear, is her element.

She explains, “I started a software business in 1986 with four other friends. Seven years later, it went public, and I was able to retire at the age of 33. I moved to Australia, and that’s where the idea for Creative Gateways came about.”

A chandelier that her architect suggested electrified the light bulb in her head. She’d taken her to an artists’ collective called The Jam Factory, named for the industrial space it had once been, to have it made. In the following months, a glassblower and an ironworker collaborated to bring her fabulous chandelier to life.

Like her former business in which her ideas and those of her friends came together to form something wildly successful, she saw that artists working together were able to form a wonderful synergy.

At the same time, free from the constraints of corporate life, Pilisa was exploring her own artistic side. She was also learning more about indigenous cultures, and found purpose and passion in empowering them.

Tears enter her eyes as she shares these stories. “Taking my name was one of the most important things I’ve ever done in my life. It changed everything for me.”

She purchased 200 acres of land near Philadelphia, where she hoped to build a retreat center. When she ran into roadblocks with that project, she took a 10- week road trip through New Mexico and Arizona, searching her soul for signs of what to do next. Her first stop was to see a healer named Walking Thunder in Two Great Hills, New Mexico, who sketched red rocks on a piece of paper and told her they would be seen from her home. As fate or predestination had it, they turned out to be the Cockscomb formation she now wakes up to every day.

The Southwest held other gifts for her, too.

“The Southwest seemed closest to Australia in terms of climate, and it seemed way more relationship-based than other parts of the country. When I drove into Sedona, it was, ‘I’m home!’ I made 12 new friends my first day, and I found my house within 24 hours.”

For four years, Pilisa ran a craft supply store in Sedona. It was there that she was introduced to fused dichroic glass cabochons.

“After creating my first few, I was completely hooked,” she says. “I realized that glass was my medium. You never know what’s going to happen when you close the kiln door and turn it on. Opening the kiln door after a firing to see what happened to my pieces is a thrill that I doubt I’ll ever get tired of.”

Pilisa creates plenty of original art, including gorgeous bowls and inspirational plates. As an energy worker, she also infuses spiritual blessings and intentions into many of her pieces.

Her favorite pieces, however, are commissioned works—because, of course, she loves the collaboration.

“The way people react when they see my finished pieces is fun for me. I love to see the smiles on people’s faces when they see their ideas brought to life, so to speak. It keeps me going.”

For years, Pilisa had been on the lookout for the perfect studio space where she could work. In her dreams, she saw a wide-open space where she brought people together, sparking a vision of the collective community she continues to work toward.

“I was in Hawaii when my friend, who was a realtor, called me and said, ‘This is the place!’ My friend sent videos to me, and even put in the down payment so that we could lock it down until I got back.”

Several other talented artists work and exhibit from the space. Like everything else she does, Pilisa continues to listen to her heart, knowing it will attract like-minded artists and supporters.

“I’m always coming back to the idea of community,” she says. “Community is the center for everything. Everyone is really hungry for connection. It’s great to get to do everything on our own, but at the end of the day, if we don’t have a community to support us, we aren’t going to be satisfied, whole and complete.

She adds with a smile, “That’s what I’m trying to do with everything I do in life.”

Like the beautiful glass pieces displayed on shelves nearby, Pilisa continues to bring together individual parts and combine them into something unexpected—and something more beautiful than any of us can imagine.