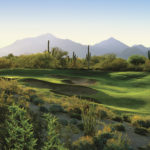 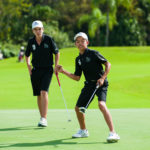 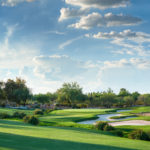 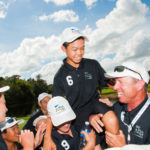 We’ve been hearing about it for years now — play is down at courses across the nation, equipment sales are tanking and the demise of the game of golf is upon us. As if that weren’t bad enough, according to the National Golf Foundation, the number of golfers in the U.S. dropped from a high of 30.6 million golfers in 2003 to 24.7 million in 2014.

In response to these numbers, the PGA of America has spent the last few years searching for new ways to appeal to the country’s next generation of golfers.

It’s one of the game’s fastest-growing programs, and Grayhawk Golf Club is rolling out the red carpet for the league’s championship matches November 19-21.

“We’re honored to host the 2016 PGA Junior League Golf Championship,” says Joe Shershenovich, Grayhawk Golf Club PGA director of golf. “Growing the game of golf is a goal we all share, and hosting this championship is a great opportunity for junior golf in Arizona.”

What is PGA Junior League Golf?
Started in 2011 as a key initiative of PGA REACH, the PGA of America’s charitable arm, PGA Junior League Golf is a national program for boys and girls ages 13 and under. Rather than an individual competition, kids play a scramble format on teams with their friends, complete with numbered jerseys. Each team is captained by a PGA or LPGA teaching professional, who provides instruction and direction.

“The fact that they are playing a scramble relieves a lot of the pressure that comes with playing individually,” says Bob Doyle, PGA player development regional manager for the Southwest.

The scramble format, in which players can choose the best shot between the two of them and both play from that spot until they hole out, encourages teamwork and problem solving.

“If they hit a bad shot, their partner can help bail them out and they don’t feel discouraged,” says Doyle. “It gives everyone the chance to make bogeys and pars, so the kids enjoy the game more and progress faster.”

Over the past two years, participation in the league has grown by 233 percent. Today, it has more than 30,000 youth participants and 2,500 teams in 48 states and all 41 PGA sections. The program even boasts superstars Rory McIlroy, Rickie Fowler, Michelle Wie and Lexi Thompson as official PGA Junior League ambassadors.

The Southwest section of PGA Junior League Golf, which includes Arizona and Las Vegas, went from 22 active teams in its first year to 46 teams in 2016. Doyle believes that number will hit 100 in the near future.

“We have definitely seen an uptick in the number of junior golfers out there playing, and it’s encouraging for the future of the game,” he says.

Team Concept is a Real Winner
Despite rumors of golf’s demise, this summer’s Ryder Cup posted record television numbers, including the most-watched day in Golf Channel’s 21-year history on the first day of competition. Across all three days of coverage from Hazeltine National Golf Club, the Ryder Cup averaged 4.3 million viewers, peaking with 6.4 million on Sunday on NBC. Overall, average viewership was up 95 percent compared to the 2014 Ryder Cup in Scotland.

So what is the secret to its popularity? Is it intense patriotism? Or is it simply more entertaining to see individuals come together as a team to achieve victory, and to have fun doing it?

It turns out it’s a little of both. Grayhawk’s Shershenovich, who attended this year’s Ryder Cup at Hazeltine in Minnesota, says the environment was electric, and he can certainly see the allure of the biennial event.

“Golf is traditionally an individual sport, so it’s one of the few times we get to see golfers playing in a team competition,” says Shershenovich. “The pros embrace it, they cheer for each other and they have fun. It seems more real. If I’m a kid watching on TV, it’s powerful stuff.”

After watching Reed, Fowler, Spieth and company fist-pump and chest-bump their way around Hazeltine last month, there’s no denying that the boys were having the times of their lives while representing their country. For Doyle, that’s what the appeal is all about.

“It’s all about team, an association with a city or town or country — for the Ryder Cup and these kids,” he says. “They play for their buddies, their home course. It’s a big point of pride.”

Grayhawk Rolls Out the Red Carpet
Grayhawk is no stranger to big events, having hosted the PGA Tour’s Frys.com Open, Andersen Consulting World Championship of Golf, Williams World Challenge (which benefited the Tiger Woods Foundation) and the Thunderbird International Junior. The PGA Junior League Golf Championships at Grayhawk will be no different, as the club plans to treat the tournament much like a PGA event.

“Arizona may never host a U.S. Open, but to us, this is a major,” says Shershenovich, who sees the event following in the footsteps of baseball’s Little League World Series, hosted annually in Williamsport, Pennsylvania.

“When a kid wins their regional and makes it to Williamsport, it’s a once-in-a-lifetime experience,” he says. “The level of volunteerism and community involvement is tremendous. I just know our golf community has the potential for the same level of support.”

This year, Shershenovich is focused on setting the standard for future PGA Junior League Golf Championships.

“When the kids compete here in November, we look forward to providing each of the eight teams with the same prestigious experience that the world’s best receive,” Shershenovich says. “It will certainly be unforgettable for the 10 kids who win the championship, but we’re going to ensure that the other 70 kids and their parents who make the trip also have an amazing experience.”

The PGA Junior League Golf Championship features nine-hole matches played in a popular two-person scramble format, with points awarded based on number of holes won. Final scoring is based on the record of matches won, tied and lost. For the championship event at Grayhawk, each team will play three matches between November 19-20 to determine a winner in the East and West divisions. Those two teams will then compete for the championship title on November 21. Spectators are welcome during all days of competition.