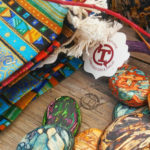 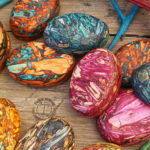 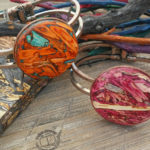 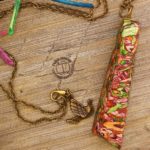 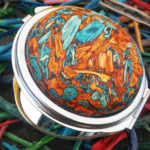 On a fateful drive through Texas, Walter and Doris Husbands, like many before them, came across a tumbleweed moving its way down the road. Doris, who had never encountered one before that moment, felt unsure about how to maneuver around it. Walter, on the other hand, was quite familiar with tumbleweeds and instructed her to “just drive over it.”

And so she did. But they soon found out that particular tumbleweed wasn’t going to let them pass by without a fight.

About a mile down the road, it was apparent who had won when they pulled the car over and Walter removed the pesky and determined tumbleweed from beneath the car. Doris then made a quick decision that, unbeknownst to them, would forever change their lives. She felt that the tenacious tumbleweed needed to remain with them. So they brought it home and, instead of finding its place in some dark corner of the garage, it became a showpiece inside their house.

“After several years of spray paint and tinsel, Halloween ghosts and Christmas ornaments, our mascot tumbleweed just fell apart into an eclectic display of dried sticks and stems in a beautiful array of colors, resting in the bottom of an old clay pot,” explains Walter. “The first thought in my artist’s brain was, ‘If I can get those bits and pieces to stick together, I can sculpt something unique.’”

A lifelong, self-proclaimed part-time artist, Walter went to work on the tumbleweed. He believed that something beautiful would birth from the broken pieces.

As he started dyeing and pressing the tumbleweed into something that could not only hold together but also be aesthetically pleasing, it was evident that this would be no easy feat. Consequently, what started as a weekend hobby eventually turned into a full-time obsession for Walter. However, the more he failed, the more determined he became to create the art he knew would eventually emerge from the tumbleweed. Walter was becoming just as determined as the tumbleweed had been that day in Texas.

“The first try failed,” says Walter. “So did the second and third — and so did the 78th! With the needed equipment becoming more complex, supplies costlier and patience waning, my commitment often failed me. But I continued to come back to the vision of tumbleweeds resting in the bottom of that old clay pot.”

Thankfully, Walter continued to believe in his vision, and in September 2012, after those many failed attempts, he created his very first “fossilized” tumbleweed. As he cut into the brick, he knew his hard work had paid off.

He says, “When I finally held the very first tumbleweed gem in my hand, with my wife and grandson gathered around, we knew something never seen before had just blinked into existence … and that moment is truly the beginning of my family’s journey.”

That journey eventually led them into developing a family business: Tumblestone Tumbleweed Gems & Jewelry. Five other family members now work with Walter and Doris. Together, they start the process by gathering mature tumbleweeds from the Arizona desert. After debarking them, they dye the tumbleweeds using vivid, plant-based pigments for color. Once dyed, the sticks become compressed for 30 days, which produces a brick of fossilized tumbleweed.
Lastly, pieces of differing sizes, shapes, colors and grain patterns are cut from the brick. The gems are then used to make vibrant, one-of-a-kind necklaces, earrings, bracelets, brooches, compacts, ornaments and cabochons. Nothing that remotely looks like a tumbleweed.

It is hard to imagine that Walter might not have taken a second look at that random tumbleweed blowing across Texas, when it now holds such a special place in his and his family’s lives.

“I would have never kept a tumbleweed,” Walter says. “I grew up in Arizona and at the time [in Texas], had what I would call a regional, natural distaste for them. That was a long time ago, though. Now when I look at them, I see the story they tell of hard, dusty miles, of endless fence lines and of the lean body of the earth rising to be caressed by the sky.”

And, of course, he sees the remarkable beauty he can create from a bunch of sticks.