Take a Ride Through History on the Foothills Trolley 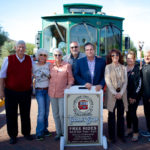 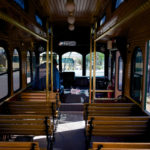 The towns of Cave Creek and Carefree have come up with a great solution for making their unique contributions of food, shopping and fun accessible to visitors and locals alike. Their latest effort, the Foothills Trolley, is a free way to traverse some of the towns’ most popular spots and scenic views, and it’s a nod to Phoenix history to boot.

It was Carefree Councilman Mike Farrar who first brought the idea of providing a free public transportation option to bond the communities and bring something a little different to our already-exceptional corner of the Valley.

His plan was enthusiastically embraced by both town councils and was brought to fruition with the first run of the Foothills Trolley Dec. 2.

“My goal was to provide a free public transit system in a fun, social and entertaining way to bond our two communities together into one amazing place, and to offer a unique attraction for weekend travelers to experience our wonderful restaurants, businesses and fantastic mountain vistas,” said Farrar.

As innovative as the trolley is, it’s not the first time a streetcar has come to the Valley of the Sun. Before the days of cars and highways, it was another forward-thinking man named Moses Hazeltine Sherman who came up with the idea of a Valley trolley system.

Sherman arrived in Phoenix from his native New York in 1883 as a penniless schoolteacher. What he would do with his luck and gumption would, in many ways, change the face Phoenix and of the West.

Originally, Sherman’s transportation system relied on horse-drawn carts, but by 1893, he earned enough to develop an electric railway system run on tracks through Phoenix streets. It was widely popular, and helped to define which parts of Phoenix grew—and which parts did not.

Its motto, “Ride a Mile and Smile the While” would have been just as apropos for the Foothills Trolley.

Factories and retail stores recognized the advantages of locating near the lines, and both residential and commercial real estate boomed near the tracks. Sherman took advantage of those trends, too. Within a few short years, Sherman had acquired a vast fortune in real estate, banking, ranching and railroads.

Had history not had different plans, there may have been an electrified trolley in the North Valley running today. By 1925, the year the City of Phoenix purchased the lines, there were six lines criss-crossing the Valley, running a total of 33.6 miles. A tribute to these iconic cars can be found at the Arizona Street Railway Museum in downtown Phoenix.

Sherman moved on to bigger pastures, co-founding the Consolidated Electric Railway Co. in Los Angeles, which became the famous Red Car system that grew that city. He founded a suburb of Los Angeles called “Sherman,” which would later become West Hollywood.

As quickly as the Phoenix trolley fleet came in, so did it disappear. A fire destroyed most of the cars in 1947. By then, cars, trucks and freeways had redefined the urban and suburban landscape, and city officials opted to not rebuild the system. Overnight, buses became the only public mode of transportation.

It wasn’t until the Metro light rail system opened in 2008 that the city returned to a transportation mode resembling its early roots.

That is, until today.

It seems entirely fitting that two communities that so fervently embrace history would breathe exciting new life into the past through the Foothills Trolley. After all, Cave Creek and Carefree are not just destinations; they’re experiences—in many ways, a step back in time.

“I could not be more proud to see our two towns working together to benefit our entire community as friends and neighbors,” said Farrar. “We are all very excited, and I cannot thank enough everyone involved in making this happen.”