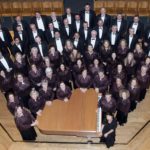 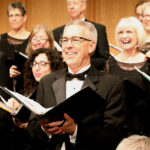 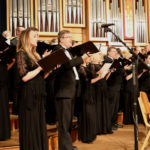 For 24 years, the Sonoran Desert Chorale has delighted audiences in the Valley, singing an eclectic selection of music that transcends our differences and accentuates our commonality. The group begins its anniversary season in October with the first of four concert series that founding director Jeff Harris calls “a celebration of 25 years of music.”

“[Audiences] will hear an extremely high-quality choral ensemble of people in the Valley—from all over the Valley—with music that will span a wide variety,” said Harris, noting that the concerts will include music that ranges from classical and American contemporary to theater and opera. “It’s a very high-quality amateur ensemble with a lot of musical integrity.”

The Sonoran Desert Chorale has appeared alongside several of the Valley’s other artistic organizations such as the Phoenix Children’s Chorus, Southwest Brass and the Mesa Caledonian Pipe Band. It has also paired with a number of professional performers like Kurt Bestor, Michael Bublé and Michael Crawford, since Harris founded the group in 1994.

“I grew up in the Midwest in a town by the name of Fort Dodge, Iowa,” Harris explained. “I went to a community college there and, as a freshman, I was asked to join the school’s choral society. I think that was the spark. As the years went by, I started to think it would be fun to put together an organization that would be similar to the choral society that I experienced in the Midwest.”

Harris began discussing his idea with friends, who helped him acquire non-profit status. He then met with the superintendent of Mesa Public Schools, where he worked at the time as a teacher, and introduced his dream of creating a community ensemble of singers. His energy and enthusiasm solidified a one-year pilot program at Westwood High School.

“We had auditions in the Westwood High School auditorium and put 44 people in that first choir,” said Harris, adding that the group has grown in size since its 1994 inaugural concert. “This year we have added six or maybe seven people, and we’re singing with a group of about 62.”

Auditions for the Sonoran Desert Chorale take place each May, with prospective members performing a song of their own choosing before moving on to more advanced assessments of their musicianship. Members then attend weekly two-hour rehearsals, leading up to each of the season’s four concerts.

“The first five rehearsals out of eight that we do are all technical,” Harris explained. “We’re trying to get the blueprint of the music and teach [our singers] things along the way. The last three are refinement and trying to really have it be musical.”

The Sonoran Desert Chorale’s singers come from all different walks of life. The group includes music educators from many of the Valley’s schools, as well as homemakers who are simply seeking an outlet for their talent and creative expression. This year’s roster also features a veterinarian, a college professor and an engineer who is a consultant with NASA.

“We consume a lot of music,” Harris said. “I think that’s what makes the ensemble attractive. We have many people who come from Northern Arizona University’s choral program, we have former performance majors from Brigham Young University, and we have other people that come in with a lot of choral experience from the Midwest. I think they come to be challenged and to be nurtured through the choral music art.”

The Sonoran Desert Chorale’s 25th anniversary season roster also features six charter members from the group’s inaugural year. However, Harris is always on the lookout for fresh talent—especially singers between 20 and 30 years old—to ensure the group does not “age out.”

“That has offered us incredible youth,” the director explained. “They come in with great backgrounds and musical maturity, yet with young voices that are flexible. That’s the key. The Sonoran Desert Chorale fills a niche that is quite unique because the people who sing with us are very talented musicians, and yet they’re volunteers.”

The Sonoran Desert Chorale’s first concert series of the season takes place Oct. 6 in Mesa and Oct. 7 in Scottsdale, and is dubbed “Audience Choice—Encore!” The group surveyed its audience base via e-mail to program the concert with fan favorites from the more than 1,100 songs it has performed over the past 24 years.

Attendees can expect to hear a potpourri of music, opening with a 400-year-old piece from Italian composer Claudio Monteverdi, and closing with American composer Leonard Bernstein’s “Make Our Garden Grow.” Other song selections will include Pete Seeger’s “Turn, Turn, Turn,” Annie Lennox’s “A Thousand Beautiful Things,” and John Lennon’s “Yesterday,” as well as “Jai Ho,” the crowd-pleasing theme from the 2008 Academy Award-winning film “Slumdog Millionaire.”

The Sonoran Desert Chorale’s annual holiday concert series, “Sing We Now of Christmas,” will take place Dec. 8 in Mesa and Dec. 9 in Scottsdale, and feature festive favorites like British composer Cecilia McDowall’s “Christus Natus Est,” as well as selections from contemporary composers such as Randol Bass and Eric Whitacre. Harris assured that the annual audience sing-along is also on the agenda.

The group’s third concert series, “A Sacred Mosaic,” will take place March 2 in Mesa and March 3 in Scottsdale. It will consist of the kind of music that Sonoran Desert Chorale has taken on its six European tours, which have included performances at St. Mark’s Basilica in Venice, Salzburg Cathedral in Austria, St. Vitus Cathedral in Prague and St. Peter’s Basilica in the Vatican.

The Sonoran Desert Chorale’s fourth and final concert series of its 25th anniversary season will take place May 4 in Mesa and May 5 in Scottsdale. Dubbed “Sing On,” Harris said it will celebrate themes of love and friendship.

“So much of choral music speaks to relationships,” said Harris, noting audiences can expect to hear Czech composer Antonín Leopold Dvorák’s “Song to the Moon” and Dolly Parton’s “Light of the Clear Blue Morning.”

“Much of the music will highlight those kinds of things and also how music affects the soul. Choral music is special because not only do you have wonderful melodies but wonderful texts to go with those melodies.”

Harris takes great pride in selecting the music for Sonoran Desert Chorale’s concerts, especially since he has been able to devote a lot more time and energy doing so following his 2010 retirement from Mesa’s Westwood High School, where he served as director of choral activities and chairman of the performing arts.

“That’s the most important thing I do as the director, choosing the literature that I’m going to put in front of our singers and our audiences,” said Harris, adding that it is also one of the most difficult aspects of his job.

“You have to program things that will draw people. It’s a challenge to keep the integrity of the ensemble going and not just play to the audience. There’s a balancing act that has to take place.”

However, with 24 years under his belt, Harris has certainly succeeded by programming a wide spectrum of music, with each concert offering a different palette for his singers and their audiences. The director said his time at the helm of the Sonoran Desert Chorale has given him a richness of experience that he would otherwise have been unable to achieve.

“The nuances that we experience are a collaborative effort that is brought about by in-the-moment, in-performance sparks that fly,” Harris described. “There’s a lot of divine intervention that occurs. That’s the beauty of this ensemble. They have given back to me such a feeling of accomplishment and variety of expression. It has really meant a lot to me as a director and it has kept the creative juices flowing.”