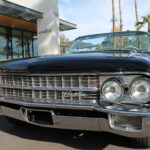 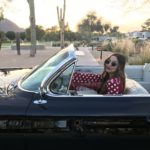 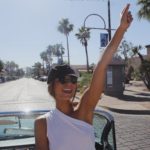 Picture yourself cruising the streets of Scottsdale in a 1962 black convertible Cadillac straight out of “Mad Men”—the sun shining, wind in your hair, heads turning to see who could be driving past in such a slick ride. It’s definitely a moment to capture and share with friends.

The moment can be yours when you reserve the Instagram-inspired tour with “Nora,” the Andaz Scottsdale Resort & Spa’s house car named for the surrounding Sonoran Desert in a Facebook contest. The resort is one of many spots capitalizing on the public’s insatiable appetite for all things picturesque.

“We originally purchased the car from the Barrett-Jackson as a VIP courtesy car,” Andaz Scottsdale marketing manager Natalie Murphy said. “We noticed that guests were using the car as a prop on Instagram. We decided to make it a moving prop because there are so many beautiful places around town that people love to photograph.”

There’s no doubt that our Valley is one of the most photogenic spots in the country. With the popularity of photo-sharing apps like Instagram, Snapchat and VSCO, local businesses, resorts, and public arts campaigns, such as Experience Scottsdale’s 2018 “Summer Art Walls” mural project, seek to attract photographers, ’grammers and bloggers searching for a spot to pose.

And there’s no reason to pose alone. Whether you’re a tourist or a local, a photographic adventure is a fun way to create a visual (and shareable) record of get-togethers with friends, date nights, birthdays and anniversaries.

There are plenty of spots beyond the borders of Scottsdale to get your ‘gram on. Grab your iPhone or fancy camera and head to Roosevelt Row in downtown Phoenix, named one of the top 25 Most Instagrammed Art Spaces for some of the most colorful street art around.

Fluttering blackbirds take flight in Brian Boner’s 2016 mural on the MonOrchid building, or you can grow a colorful set of wings in front of artist Lauren Lee’s augmented reality mural, “Take Flight.” Send the world a “Wish You Were Here” message from the Calle 16 Mural project’s postcard-style “Phoenix” mural behind Barrio Cafe. The possibilities–and styles—are practically limitless.

Of course, after you’ve shutter-bugged your way through town, it’s time to wind down with a drink! The Andaz tour includes a “Libation Exploration” class behind the bar with one of the resort’s Weft & Warp Art Bar + Kitchen mixologists or a culinary class with one of the chefs in the glass-enclosed kitchen.

Wherever you go, it’ll be more fun if it’s a showstopper on your social media feed. Diego Pops in Scottsdale is oft-photographed with its well-known Brussels sprouts nachos and snow cone margaritas served beneath a pink neon “Tacos” sign, or show off a classic ice cream sundae  at pink-all-over Sugar Bowl.

If you’re downtown, Angel’s Trumpet Ale House lures you in with their commissioned untitled mural by renowned street artists Malo Cota and Thomas “Breeze” Marcus, then rewards you with brightly crafted cocktails and inventive fare served on TV dinner-style trays, just for fun.

So, get on the Google machine and map out your next rad post. It’s a great way to explore parts of town you might have missed if you weren’t so keen on snapping the ultimate selfie.